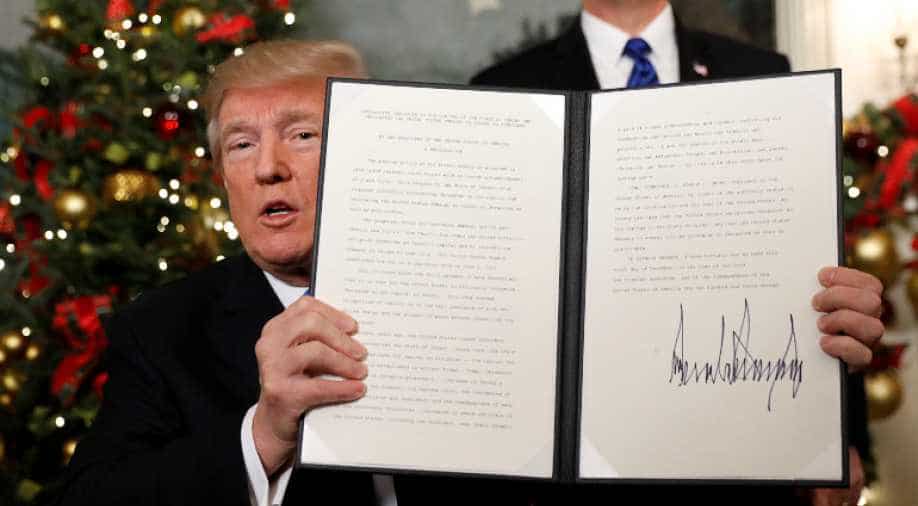 US President Donald Trump holds up the proclamation that announces the United States recognizing Jerusalem as the capital of Israel and moving its embassy there, during an address from the White House in Washington on December 6. Photograph:( Reuters )

Allies and foes alike denounced his decision and Palestinians questioned whether their dream of statehood, as part of a peace deal brokered by Washington, was still possible ||Trump also kicked off the process of moving the US embassy from Tel Aviv to Jerusalem

Trump's defiant move, making good on a core campaign pledge, ended seven decades of US ambiguity on the status of the Holy City, which is vociferously claimed by both Israelis and Palestinians.

America's leader appeared further isolated, as allies and foes alike denounced his decision and Palestinians questioned whether their dream of statehood, as part of a peace deal brokered by Washington, was still possible.

But the US president claimed this marked the start of a "new approach" to solving the thorny Israeli-Palestinian conflict. (Also Read - UN Security Council to meet Friday on Jerusalem: Diplomats)

"It is time to officially recognize Jerusalem as the capital of Israel," he said, urging calm and "the voices of tolerance to prevail over the purveyors of hate." (Also Read - Opinion: Trump is wrong; Israel alone can't claim Jerusalem)

US President Donald Trump delivers a statement on Jerusalem from the Diplomatic Reception Room of the White House in Washington as US Vice President Mike Pence looks on. (AFP)

Hamas -- the Palestinian Islamist movement that runs the Gaza Strip -- warned that Trump had opened "the gates of hell on US interests in the region."

And although welcomed by Israel's Prime Minister Benjamin Netanyahu as a "courageous and just decision," Trump's move left many angry US allies struggling to find a measured response -- and hoping that the tinderbox region is not destined for yet another round of bloodletting.

Through gritted teeth, Britain described the move as "unhelpful" and France called it "regrettable." Germany said plainly that it "does not support" Trump's decision.

Eight countries including Britain, France and Italy pressed for an emergency meeting of the UN Security Council in response to the move, which was set for Friday.

Turkey and Iran -- both vying for regional influence -- tried to give voice to the anger felt by many across the Muslim world.

Turkey called the decision "irresponsible" and illegal. Iran said it would "provoke Muslims and inflame a new intifada."

Trump also kicked off the process of moving the US embassy from Tel Aviv to Jerusalem.

In doing so, he begins to make good on a campaign promise dear to evangelical Christian and right-wing Jewish voters -- as well as donors.

Trump's predecessors -- from Bill Clinton to George Bush -- had made the same promise, but quickly reneged upon taking office and assuming responsibility for war and peace.

The 45th US president was determined to show his arrival in Washington spells the end of business as usual, suggesting his predecessors failed to act though lack of "courage."

Moving the embassy will probably take years to implement, but the repercussions of Trump's decision preceded even his announcement.

Hundreds of Palestinians burned US and Israeli flags as well as pictures of Trump in the Gaza Strip, while relatively small clashes erupted near the flashpoint West Bank city of Hebron.

The Palestine Liberation Organization announced a strike across the West Bank Thursday, while Hamas called for a "day of rage" on Friday.

US government officials and their families were ordered to avoid Jerusalem's Old City and the West Bank, though the situation remained largely calm up until Trump's address.

Secretary of State Rex Tillerson, on a visit to Germany, said the United States had "implemented robust security plans to protect the safety of Americans in affected regions."

Turkish President Recep Tayyip Erdogan called for a summit of the Organization of Islamic Cooperation (OIC), the main pan-Islamic body, in Istanbul next week to display joint action over Jerusalem.

Jordan and the Palestinians also requested an emergency meeting of the Arab League.

Most of the international community does not formally recognize Jerusalem as Israel's capital, insisting the issue can only be resolved in negotiations -- a point reiterated by UN Secretary-General Antonio Guterres in the wake of Trump's decision.

Guterres implicitly criticized Trump, stressing his opposition to "any unilateral measures that would jeopardize the prospect of peace."

Trump insisted the move did not prejudge final talks, saying it simply reflected the reality that west Jerusalem is and will continue to be part of Israel under any settlement.

"This is nothing more or less than a recognition of reality. It is also the right thing to do," Trump said.

"Peace is never beyond the grasp of those willing to reach it," said the US leader, who declared that "this decision is not intended in any way to reflect a departure from our strong commitment to facilitate a lasting peace."

"The United States would support a two-state solution if agreed to by both sides," Trump said, as he announced that Vice President Mike Pence would travel to the region in the coming days.

Trump further stated that the United States was not taking a position on any "final status issues, including the specific boundaries of the Israeli sovereignty in Jerusalem, or the resolution of contested borders."

"Those questions are up to the parties involved," he said.

Israel seized the largely Arab eastern sector of Jerusalem during the 1967 Six-Day War and later annexed it, claiming both sides of the city as its capital.

The Palestinians want the eastern sector as the capital of their future state.

Several peace plans have unravelled in the past decades over the issue of how to divide sovereignty or oversee holy sites in Jerusalem.