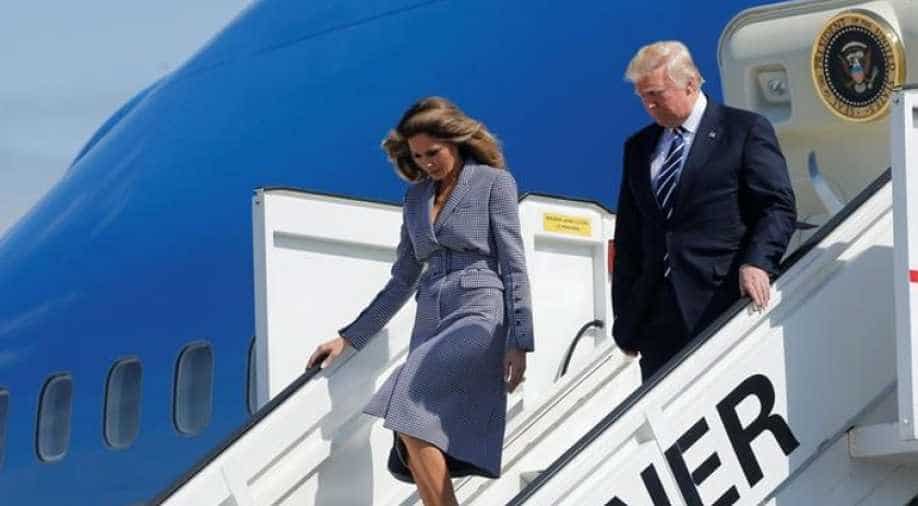 US President Donald Trump and first lady Melania Trump arrive at the Brussels Airport, in Brussels, Belgium, May 24, 2017. Photograph:( Reuters )

Trump's businesses say it's 'impractical' to get foreign representatives to declare themselves as such||Payments from foreign governments that profit Trump worry constitutional, ethics experts ||Trump may be in violation of the US?Constitution's ban on the president receiving 'emoluments'

President Donald Trump's businesses say it would be "impractical" to require customers representing foreign nations to identify themselves, raising questions about how Trump will fulfil a pledge to donate all profits from overseas governments to the US Treasury.

The umbrella Trump Organization sent a pamphlet to the general managers at each hotel, golf course, social club, and winery owned or operated by Trump, saying it would only donate profits from guests who declare they represent foreign governments.

The pamphlet was sent to the House of Representatives Oversight and Reform Committee in response to a request for information on how the Trump Organization was fulfilling the pledge Trump made in January.

“Putting forth a policy that requires all guests to identify themselves would impede upon personal privacy and diminish the guest experience of our brand," said the pamphlet.

The Trump Organization, Trump's lawyer, Sheri Dillon, and the White House did not respond to requests for comment.

Dillon announced at a January press conference that Trump would voluntarily donate all profits from foreign government payments made to his properties to the Treasury.

Emoluments are typically defined in this context as funds or gifts of value.

Seven Democratic lawmakers on the House Judiciary Committee sent the Republican president a letter on Wednesday asking for a detailed account of "any benefits or rewards, financial or otherwise" he received from foreign governments since he took office on Jan 20.

The Kuwaiti and Azerbaijani governments have already hosted events at the Trump International Hotel in Washington, DC In March, the Government Accountability Office said it would check whether Trump has made any payments to the US Treasury from profits at his hotels.

The Trump Organization pamphlet identified other entities through which foreign governments may operate, such as state-owned aerospace, defence, banking, finance, healthcare, and energy business entities.

Those entities "may not be reasonably identifiable as foreign government entities, and therefore may not be included in our calculation of profit to be donated," the pamphlet read.

Elijah Cummings, the top Democrat on the congressional committee that received the pamphlet, said in a response to the Trump Organization that its method for identifying foreign government payments was deficient.

Cummings said foreign powers would still be able to provide unconstitutional emoluments to Trump through entities that are funded and controlled but not openly affiliated with foreign governments.

"Those payments would not be tracked in any way and would be hidden from the American public," Cummings wrote.