Trump Jr. reveals messages with WikiLeaks during US election campaign 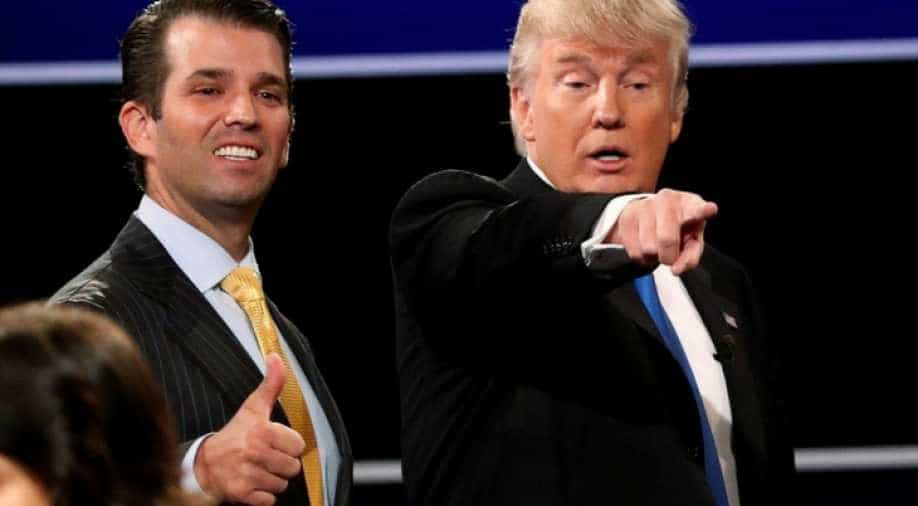 Donald Trump Jr. did not respond to most of the direct messages from the WikiLeaks Twitter account Photograph:( Reuters )

Donald Trump Jr. on Monday shared screenshots of conversations he had with WikiLeaks during the 2016 US election campaign.

Trump Jr. shared the messages via his Twitter hours after The Atlantic published a story disclosing the correspondence.

He shared the trail of messages with WikiLeaks that "one of the congressional committees" chose to "selectively leak" between him and WikiLeaks, Trump Jr. wrote.

Here is the entire chain of messages with @wikileaks (with my whopping 3 responses) which one of the congressional committees has chosen to selectively leak. How ironic! 1/3 pic.twitter.com/SiwTqWtykA

WikiLeaks is shown informing Trump Jr of a new anti-Trump website, urging his father to tweet about WikiLeaks's Clinton files and advising that, if he loses the election, Trump should challenge the result.

The group also asks Trump Jr to provide his father's tax returns because "it will dramatically improve the perception of our impartiality" while boosting the impact of its Clinton materials.

"WikiLeaks made a sequence of increasingly daring requests, asking for Trump’s tax returns, suggesting the Trump campaign on Election Day to reject the results of the election as rigged, and seeking that the president-elect tells Australia to appoint Julian Assange ambassador to the United States," The Atlantic reported.

"Off the record, I don’t know who that is, but I’ll ask around," Trump Jr. responded on September 21, 2016, reported The Atlantic.

Trump Jr only replied to three early messages, thanking WikiLeaks for the information on the new website, making a slighting comment about Clinton, and, on October 3 last year, just before WikiLeaks published a trove of files on Clinton, asking "What's behind this Wednesday leak I keep reading about?"

On October 3, 2016, WikiLeaks wrote to Trump Jr. asking them to promote a story about Hillary Clinton saying, "Can't we just drone (Julian Assange)?"

"Already did that earlier today," Trump Jr. responded. "It’s amazing what she can get away with."

In April, WikiLeaks suggested Trump Jr. hand over emails in regards to a meeting he had with a Russian lawyer that had become an important aspect of the federal investigation into a probable conspiracy between the Trump campaign and Russia.

Trump Jr. did not reply to the message, but moments later gave information about the emails himself through his Twitter account.

In his own tweets, WikiLeaks founder Julian Assange claimed that these messages were done as a promotional activity.

"WikiLeaks can be very effective at convincing even high-profile people that it is their interest to promote links to its publications," he said.

(with input from agencies)