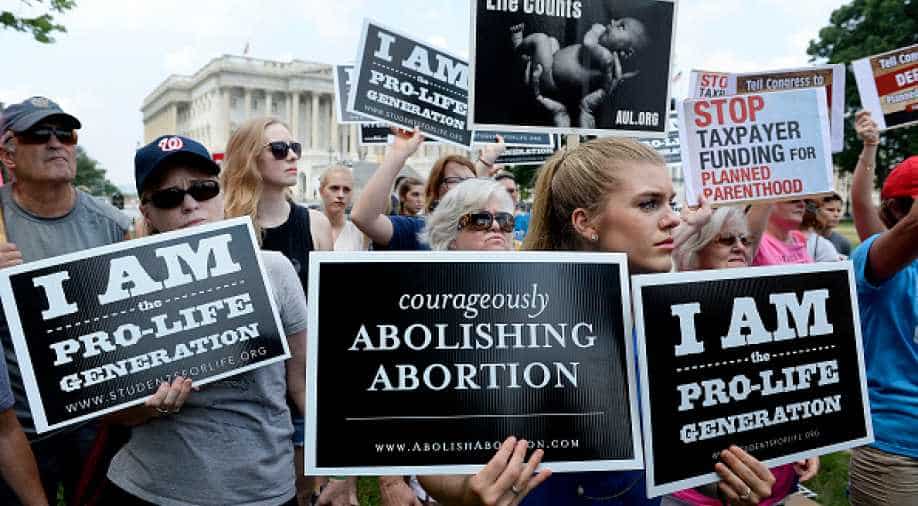 Conservative Republicans and evangelical Christians opposed to abortion are holding out hopes for the kind of change they want to see under a Trump administration. (In photo) An anti-abortion rally in front of the US Capitol. Photograph:( Getty )

Pro-choice activists, who support a woman's right to choose to use contraception or have a legal abortion, suffered setbacks in several US states in recent days.

In Ohio, Republican Governor John Kasich signed on Tuesday a law banning abortion after the twentieth week of pregnancy, making no exception for rape, incest or foetal anomaly. The bill makes only limited concessions in cases where the pregnancy could harm the woman's health.

The move is a risky bet. The US Supreme Court has already ruled that states cannot prevent a woman from having an abortion before the foetus is viable, experts say that threshold occurs around 24 weeks of pregnancy.

Just over one per cent of abortions in the US are currently carried out after 20 weeks, according to the pro-choice Guttmacher Institute.

But available data does not seem conclusive on how many abortions after 20 weeks take place for birth defects or other reasons.As alarming as the measure may be for abortion backers, it could have been worse.

A separate, so-called "heartbeat bill" would have banned abortions as early as six weeks into a pregnancy, even though women are often unaware they are pregnant at that time. But Kasich vetoed the measure.

In Tennessee, a woman who tried to abort her foetus at 24 weeks using a metal clothes hanger was recently slapped with bolstered criminal charges.

For the pro-choice camp, the case illustrates the growing fear that women denied an abortion may resort to desperate, clandestine measures that had not been prevalent for decades.

On the other side of the debate, anti-abortion activists feel wind in their wings with conservative Trump set to take power January 20.

The Americans United for Life group published a report of more than 200 pages detailing the "horrific abortion clinic conditions," finding that 227 abortion providers in 32 states were cited for more than 1,400 health and safety "deficiencies" between 2008 and 2016, and had violated hundreds of state laws.

The study aims to provide state lawmakers, ahead of 2017 legislative sessions, with "an important tool for explaining the critical need for enhanced health and safety standards," said Denise Burke, an AUL vice president and the report's author.

Conservative Republicans and evangelical Christians opposed to abortion are holding out hopes for the kind of change they want to see under a Trump administration.

And incoming Health Secretary Tom Price is expected to lead a crusade against family planning and health care plan reimbursements for contraception.

Trump himself has vowed to nominate Supreme Court justices strongly opposed to abortion, which he claims would "automatically" overturn the high court's landmark Roe v Wade decision of 1973.

There is nothing automatic about Supreme Court reversals, which are not common. But Trump stands a solid chance of pushing through a conservative agenda at the most powerful court in the land, with one seat on the nine-member panel currently left vacant and one or more others likely to come due to the advanced age of some justices.

Ever since the Roe v Wade decision was handed down in 1973, conservative activists have repeatedly sought to raise barriers for women seeking an abortion.

Oklahoma state's high court on Tuesday rejected a new law that required abortion clinic doctors to have admission rights for their patients at a local hospital within 30 miles (48 kilometres).

Earlier this month in Texas, a judge suspended a law that required abortion clinics to cremate or bury foetal remains after abortions.

But the US Supreme Court had strongly reaffirmed in June women's rights to an abortion, a hot-button issue that has incessantly torn at the US social fabric. That ruling could be the last major victory for the pro-choice camp for a long time.