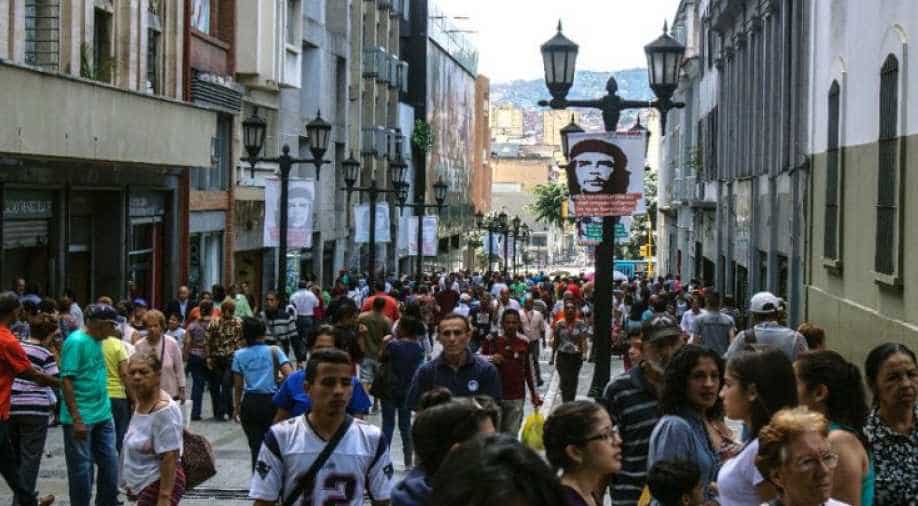 Since 2014 Venezuela has paid nearly $72 billion in principal and interest payments on the debt. Photograph:( AFP )

Venezuela on Friday called foreign creditors to a November 13 meeting in Caracas aiming to restructure its estimated $150 billion debt, as credit-rating agencies dealt the crisis-stricken country another blow with double downgrades.

Standard & Poor's cut the nation's long-term foreign currency rating to "CC" from "CCC-" over growing concerns of the risk of a debt default in the oil-producing country, while fellow agency Fitch cut the long-term debt rating to "C" from "CC."

The increasingly dire warnings followed President Nicolas Maduro's calls to "investors across the whole world and to holders of Venezuelan debt"  to attend a Caracas meeting November 13 "to start a process to refinance and renegotiate the external debt."

His vice president, Tareck El Aissami, who is leading a commission tasked with the restructuring, said the government is seeking "sovereign commitments" for a debt renegotiation.

Flanked by the ministers in charge of the economy, finance, and energy, El Aissami confirmed the country had on Friday started to pay out $1.2 billion due to service the debt of state oil company PDVSA.

Maduro announced Thursday that Venezuela would begin talks to refinance the debt immediately after that payment was made.

El Aissami, one of the Venezuelan officials sanctioned by the United States due to alleged ties to drug trafficking, said the talks with creditors will "establish the groundwork to renegotiate the terms of the foreign debt of the Republic and of PDVSA."

"We will begin a sovereign renegotiation of our debt and we will continue to comply fully, transparently, as our government has done historically," he said in a televised statement.

He noted that since 2014 Venezuela, which has the largest proven crude oil reserves in the world, has paid nearly $72 billion in principal and interest payments on the debt.

Maduro has repeatedly blamed the United States for the country's woes, saying Washington is trying to strangle Venezuela with sanctions.

US sanctions imposed on Venezuela in August ban US trade in any new bonds issued by the Venezuelan government or PDVSA a needed step in any restructuring.

El Aissami denounced the "continued aggression, permanent sabotage, blockade and financial persecution" he said US President Donald Trump has imposed on the people of Venezuela. But he said the sanctions really hurt bondholders and financial institutions.

Much of Venezuela's debt is held by China and Russia, to be paid off in oil the resource that underpins the Venezuelan economy. The country has less than $10 billion in foreign currency reserves.

Analysts were pessimistic about Venezuela's chances of successfully restructuring its debt.

"Venezuela's options to keep up with its payments are shrinking rapidly, mainly because any restructuring needs to be matched with clear and credible economic reforms capable of winning the trust and support of bond-holders," said Diego Moya-Ocampos, an analyst at London-based IHS Markit.

Another analyst, Asdrubal Oliveros, director of Ecoanalitica in Caracas, said that while investors had anticipated a debt renegotiation, they wanted "a plan of restructuring and reorganization, of putting accounts in order -- this isn't that plan."

A default could see investors try to lay claim to PDVSA assets, including tankers, oil in shipment and subsidiaries such as the Citgo refinery and service station network in the US.

"The government has mortgaged the future of Venezuelans in an irresponsible way," said Stalin Gonzalez, head of a grouping of opposition lawmakers who dominate Venezuela's parliament.

Venezuela's economy is in dire shape, shrinking by 36 percent in the past four years, according to the International Monetary Fund (IMF), and is now suffering hyperinflation estimated to top 2,300 percent next year.

Production of its primary resource, oil, is declining, in large part because of rundown PDVSA infrastructure and neglected fields.

The IMF on Friday sanctioned Venezuela for not providing economic data as required of all its 189 member states. The move carries no financial penalty but is another sign of Venezuela's strained relations with the fund.

Venezuela was failing to give data on the operations of the social security institute, exports and imports, and other key economic indicators, the Washington-based lender said.