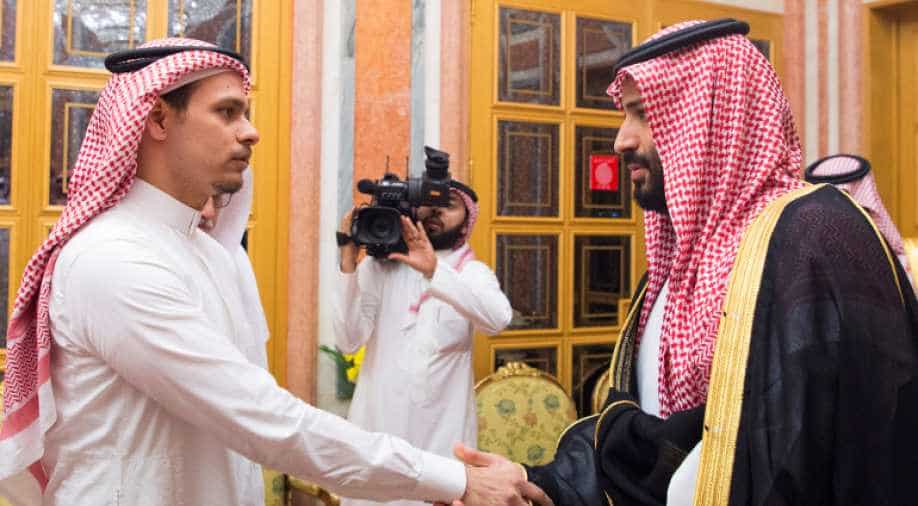 Salah Khashoggi's departure came after he was photographed on Tuesday with Crown Prince Mohammed bin Salman during a condolence visit, staring coldly as the pair shook hands.

The eldest son of murdered Saudi journalist Jamal Khashoggi, Salah, and his family have left the Gulf kingdom for Washington after the government lifted a travel ban, Human Rights Watch said Thursday.

Salah Khashoggi's departure came after he was photographed on Tuesday with Crown Prince Mohammed bin Salman during a condolence visit, staring coldly as the pair shook hands.

"Salah and his family are on a plane to (Washington) DC," Sarah Leah Whitson, the rights watchdog's executive director for the Middle East and North Africa, told AFP, citing a family friend.

Saudi officials did not respond to requests for comment, but Whitson said that they were apparently allowed to leave after a travel ban on Salah was lifted.
Salah will join his other siblings who are based in the US, friends of the family told AFP.

"Jamal's family needs a place to be together where they feel safe to mourn their beloved one," said Randa Slim, director of conflict resolution at the Washington-based Middle East Institute, who knew the slain journalist personally.

"It is tragic that it took his death to get the Saudi authorities to grant them the freedom to travel," Slim told AFP.

An official in Washington said US Secretary of State Mike Pompeo had "raised the safety and security of the Khashoggi family members with the Saudi leadership", but declined to discuss the specifics of Salah's travel.

Jamal Khashoggi, a Washington Post contributor, was killed on October 2 after a visit to the Saudi consulate in Istanbul to obtain paperwork before marrying his Turkish fiancee.

After first insisting Khashoggi left the consulate unharmed, Saudi authorities said he was killed in an argument that degenerated into a brawl.

Riyadh finally accepted on Thursday what Turkey had said virtually from the start -- that he was killed in a premeditated hit.

Saudi King Salman and Prince Mohammed met Salah and Khashoggi's brother Sahel at the royal palace in Riyadh on Tuesday.

The photo of the handshake with Prince Mohammed, who has faced a torrent of global criticism over the killing, went viral on social media, where rights activists demanded the immediate lifting of the travel ban.

Whitson said the end of travel restrictions on Salah had come as a huge relief.
But she added: "We should keep in mind there are hundreds, if not thousands, of people in Saudi Arabia who face travel bans and are held in detention without any justice."

Saudi Arabia has sought to draw a line under the crisis over Khashoggi's murder, but has come under mounting pressure from sceptical world powers demanding answers and the whereabouts of his body.

US President Donald Trump has derided the killing as "one of the worst cover-ups" in history.