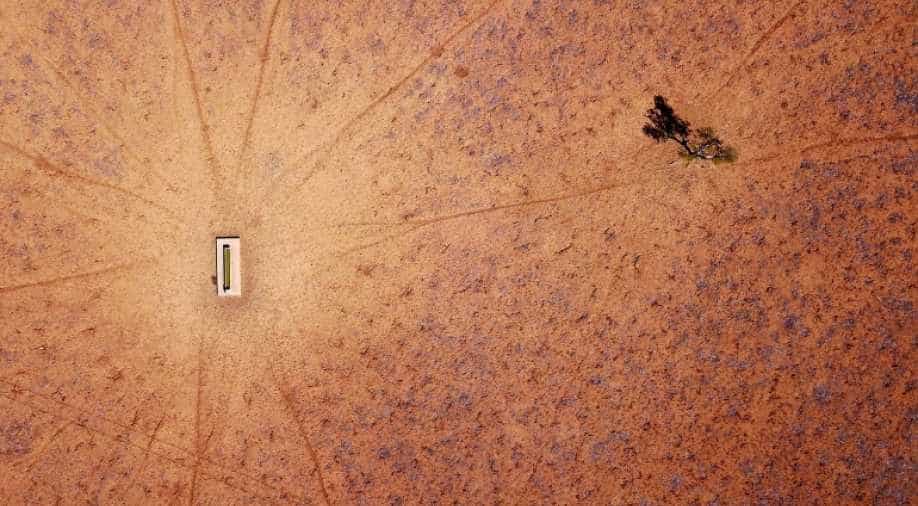 File photo of a lone tree stands near a water trough in a drought-effected paddock on Jimmie and May McKeown's property located on the outskirts of town of Walgett, in New South Wales, Australia. Photograph:( Reuters )

The record-breaking heatwave over the past week sent power prices soaring across southeastern Australia.

Blistering heat triggered power outages on Australia's strained grid on Friday as demand for air-conditioning soared and coal-fired generators struggled to meet the surge in consumption.

To shore up the grid, the Australian Energy Market Operator (AEMO) cut power to Alcoa Corp's Portland aluminium smelter, the biggest consumer in the state of Victoria, for nearly two hours on Thursday evening and on Friday.

The record-breaking heatwave over the past week sent power prices soaring across southeastern Australia.

Wholesale power prices in Victoria hit the market cap of A$14,500 ($10,298) per megawatt hour (MWh) before midday on Friday, earlier than expected, then dropped to A$300, National Electricity Market data showed.

Supply was tight, with a total of 1,800 megawatts (MW) of generation offline in the country's east, AEMO Chief Executive Audrey Zibelman said on Australian Broadcasting Corp TV. AGL Energy's Loy Yang power plant and EnergyAustralia's Yallourn, both in Victoria, were among those with units down.

Transmission links from the states of Tasmania, New South Wales and South Australia were transferring power to Victoria at full capacity, Zibelman said.

"With all of that, however, we found ourselves short...for up to the next two hours," she said. "We may have to do more over the course of the afternoon, as the demand continues to increase."

The AEMO has ordered cuts of 200 MW, which would affect about 60,000 Victorian customers.

Temperatures in the South Australian capital of Adelaide rose to just shy of 50 degrees Celsius (122 degrees Fahrenheit) on Thursday, a record high. Melbourne, the capital of Victoria, was set to hit 44C on Friday before a drop of about 15 degrees expected mid-afternoon.

Victoria Energy Minister Lily D'Ambrosio said it was clear Australia's summers were getting longer, hotter and more extreme because of climate change.

"We can see that the problem we've got now is that we've got a 20th-century system for a 21st-century climate," she told reporters at a televised briefing.

Australia is a signatory to the Paris climate accord reached in 2015, under which it has committed to cutting carbon emissions by between 26 per cent to 28 per cent from 2005 levels by 2030.

As insurance ahead of this summer, the AEMO lined up 930 MW of reserve power, including an agreement to pay Alcoa's Portland smelter to curb power when supplies are tight. Last summer, the reserve program cost the market operator A$52 million.

However, the power cut to Alcoa on Thursday came without notice because of unexpectedly high temperatures, causing demand to spike, the AEMO said.

"Alcoa will not be compensated for the curtailment," Alcoa spokeswoman Jodie Read said.

But Friday's cut to Alcoa will be under the reserve agreement.

In South Australia, where power capacity has been beefed up with diesel generators and gas-fired plants over the past two years following a state-wide blackout, 30,000 homes lost power on Thursday after transformers on local power lines overheated and switched off.

"After days of heat, we were in some uncharted territory yesterday with record heat and record load sustained well into the night," said Paul Roberts, a spokesman for SA Power Networks, the South Australian local distribution network operator.