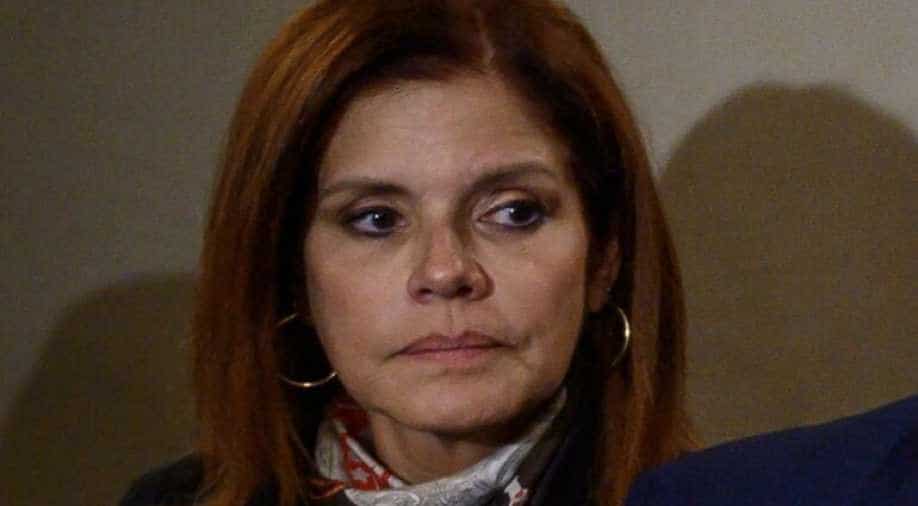 'I have decided to resign irrevocably from the position of Second Constitutional Vice President of the Republic,' Mercedes Araoz wrote on Twitter also.

Peru's vice president Mercedes Araoz, resigned and called for elections Tuesday, hours after parliament appointed her to lead the fight against the president's dissolution of the body amid a bitter deadlock over corruption and appointments to the Supreme Court.

"I have decided to resign irrevocably from the position of Second Constitutional Vice President of the Republic," Mercedes Araoz wrote on Twitter alongside a resignation letter, adding she hoped for "general elections in the shortest term."

Lawmakers had accused President Martin Vizcarra of a "coup d'etat" after he dissolved the opposition-dominated Congress and called for fresh elections Monday, voting to suspend him temporarily from the presidency and appointing Araoz as the leader.

But thousands poured into the streets of Lima and other cities in a show of support for Vizcarra, whose anti-graft drive is widely popular, with the armed forces and police confirming their backing of the president and a dozen regional governors joining celebratory street protests.

"There's too much corruption. Too much of it without any shame. It's high time this happened, that there's a change," said protester Jenny Sanchez in Lima, as demonstrators waved flags saying "New Peru."

The resignation of Araoz who had allied with supporters of corruption-tainted former opposition leader Keiko Fujimori comes after the Organization of American States (OAS) refused to get involved in the Peru power dispute.

The body said Tuesday that it was up to Peru's Constitutional Court to decide on the legality of the dissolution and that it was "fair that the political polarization in the country will be resolved by the people at the polls."

A number of lawmakers were considering appealing to the court to revoke the dissolution, according to Congress speaker Pedro Olaechea.

Despite the heated stand-off, Peru went about its business as usual on Tuesday, with the only noticeable change being heightened security around the government palace and Congress.

Vizcarra's call for fresh polls on January 26 was validated Tuesday by the independent National Jury of Elections.

A new Congress would only have a mandate until 2021, to complete the five-year period for which the dissolved Congress was elected.

Until the elections, legislative duties will fall to a 27-member Permanent Congressional Commission, 18 of whom are opposition lawmakers, led by Congress speaker Pedro Olaechea, who accuses Vizcarra of unlawfully seizing power.

Vizcarra has repeatedly clashed with Congress, which is dominated by the Popular Force party of Keiko Fujimori.

He had warned Congress on Sunday that he would dissolve the body if it denied him a vote of confidence Monday on reforming the method of appointing magistrates.

The move was aimed at preventing the opposition from taking control of the Supreme Court.

Although she lost her bid for the presidency, her party won an overwhelming majority in Congress, eventually forcing Kuczynski's resignation last year amid a corruption scandal.

Kuczynski was replaced by Vizcarra, then first vice president, who has vowed to clean up Peruvian politics.

Fujimori is the eldest daughter of disgraced former president Alberto Fujimori and is herself in prison awaiting trial after being accused of accepting $1.2 million in illicit party funding from Brazilian construction giant Odebrecht for her 2011 presidential campaign.

The Supreme Court is currently debating whether to free Keiko once Peru's most popular politician from pre-trial detention.

Odebrecht has admitted paying at least $29 million in bribes to Peruvian officials since 2004.

Three former presidents, including Kuczynski, are also being investigated over Odebrecht, while a fourth, Alan Garcia, committed suicide in April after police arrived at his house to arrest him for money laundering.