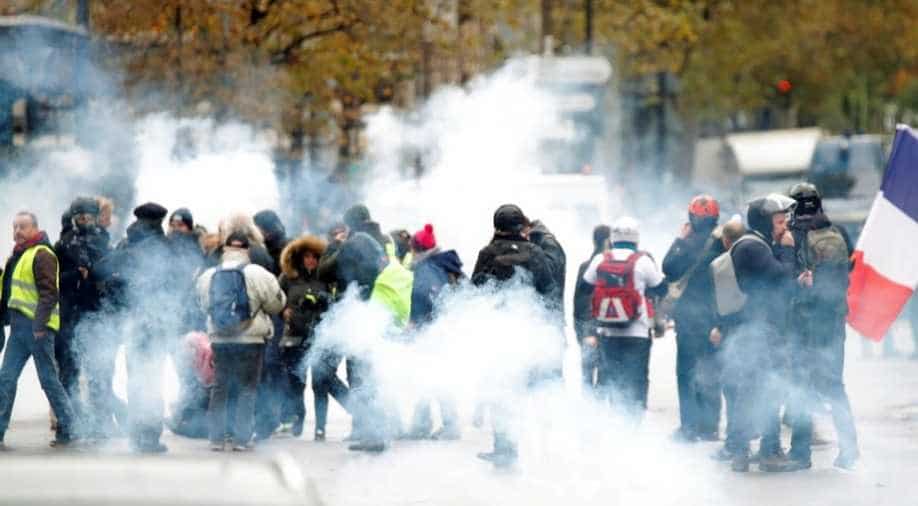 Protesters stand amidst tear gas fired by police during a demonstration to mark the first anniversary of the 'yellow vests' movement in Paris, France. Photograph:( AFP )

On the Place d'Italie in southern Paris, demonstrators, many clad in black and hiding their faces, set trash bins on fire and hurled projectiles at riot police while building barricades.

On the Place d'Italie in the south of the city, demonstrators, many clad in black and hiding their faces, vandalized an HSBC bank branch.

They set trash bins on fire and hurled cobblestones and bottles at riot police while building barricades.

Two cars were overturned, a scooter and car were on fire and police responded with tear gas and a water cannon.

Earlier, clashes broke out between demonstrators and police near the Porte de Champerret, close to the Arc de Triomphe, as protesters were preparing to march across town towards Gare d'Austerlitz.

The so-called yellow vest protests, named for the high-visibility jackets worn by demonstrators, erupted in November 2018 over fuel price hikes and the high cost of living. The demonstrations spiralled into a broader movement against President Emmanuel Macron and his economic reforms.

The protests lost strength in recent months, going from tens of thousands of participants to just a few thousand, but the movement's leaders called for people to turn out on Saturday to mark the first anniversary.

Protests have been banned near tourists spots such as the Eiffel Tower and 20 subway stations were closed on Saturday.

The yellow vest movement was one of the toughest challenges to Macron's presidency before it dwindled in the early summer.

The movement evolved from nationwide road blockades into a series of often-violent demonstrations that pitted rowdy protesters with police and have ravaged Paris and other major cities in the country.

The yellow vest crisis forced Macron to make policy concessions and delay the next big wave of reforms, including overhauling the pension and unemployment systems.

A survey by pollster Odoxa published two weeks ago showed nearly one in every two French people believed the protest movement might reawaken.

Macron's plans to simplify the unwieldy and expensive pension system, which he says will make it fairer, is particularly unpopular.

Trade unions have called on railway workers, Paris public transport staff, truck drivers and civil servants to strike against the pensions overhaul on Dec. 5, and in some cases beyond.

Students and yellow vest protesters have called for people to join forces with the unions.

On Thursday Macron promised money for hospitals in a bid to quell unrest among medics. 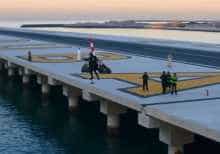 ‘Jetman’ wows Dubai by jetting high above the city's skyscrapers