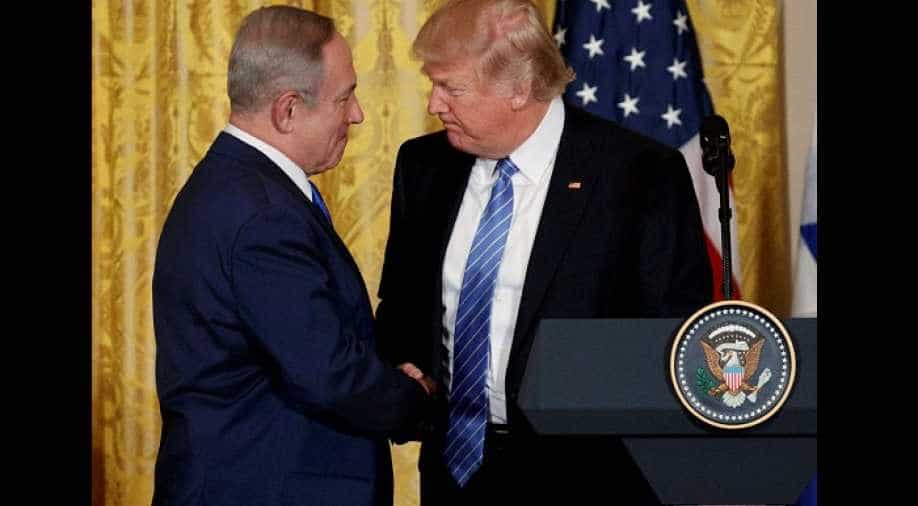 US President Donald Trump on Thursday said he would release Middle East peace plan ahead of a meeting in Washington next week with Israeli Prime Minister Benjamin Netanyahu.

"It's a great plan. It's a plan that really would work," Trump said to reporters travelling with him to Florida on board Air Force One. Trump said that the plan would probably be unveiled before the White House meeting on Tuesday.

Also read: Opinion: US policy on Palestine conflict has changed over time

The Palestinians have once again reiterated its rejection to the plans as they believe the plans intend to bury the two-state solution. They are also not invited for the White House meeting regarding the same next week.

Asked on any contacts made by the US to Palestinians, Trump said: "We've spoken to them briefly. But we will speak to them in a period of time."

Trump also said that after the declaration of the plans, Palestinians "maybe will react negatively at first but it's actually very positive for them".

US President also said that he was pleased that both Netanyahu and his main electoral rival Benny Gantz would come for the meeting ahead of the elections in Israel on March 2.

"This step only reaffirms our absolute rejection of what the US administration has done so far, particularly the recognition of Jerusalem as Israel's capital," spokesman of Palestinian President Mahmud Abbas' said in a statement.

Palestinian President broke all ties with the US after the latter recognized Jerusalem as Israel's capital in 2017, a move that went against decades of international consensus.

Trump earlier described his Israel-Palestine peace agreement brokered by the US as "ultimate deal".

The peace initiative was expected months ago but was postponed after the inconclusive September elections in Israel last year.

Israeli media claimed that the leaked outlines of the deal show that the US has accepted key Israeli demands.

The White House meeting coincides with an expected session in the Israeli parliament to discuss Netanyahu's potential immunity from prosecution over the corruption charges.