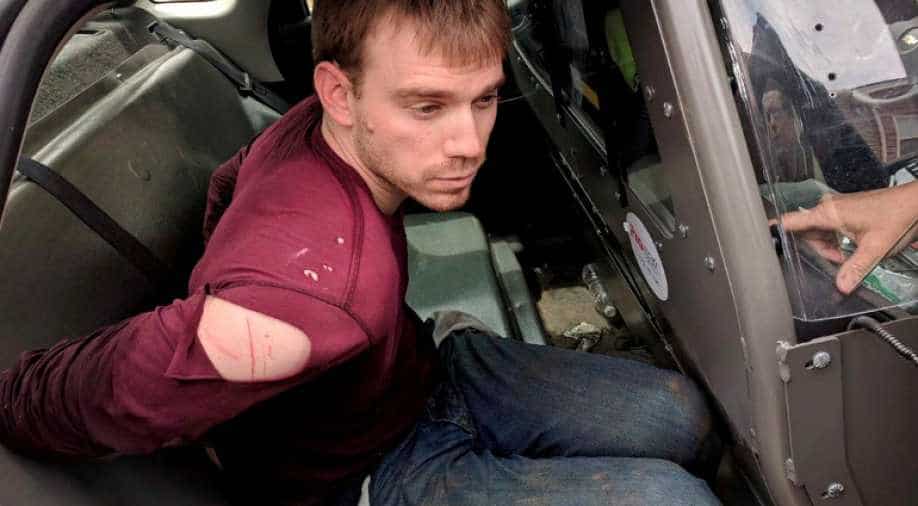 Police on Monday arrested the man suspected of fatally shooting four people at a Waffle House restaurant, ending a 36-hour manhunt after tips from the public led police to search secluded woods nearby.

Photos posted online by Nashville police showed Travis Reinking, a 29-year-old construction worker, in custody. He was suspected of opening fire with an assault rifle at the restaurant early Sunday then fleeing the scene naked.

Photographed in the back of a police car, he looked dishevelled and was wearing a torn red shirt and dirty blue jeans. He had scratches on his shoulder.

No motive was known for the attack that sent shudders through one of the biggest cities in the US South and stoked a simmering national debate on gun control.

Reinking, who had a pistol and ammunition in a backpack when he was arrested, was not talking to police. He was being held at a Nashville jail with initial bond set at $500,000 for each of four murder charges, online jail records showed.

More than 150 city, state and local law enforcement agents searched for the gunman, who has had a history of bizarre behaviour, delusions and multiple encounters with authorities, including an episode in Washington in July 2017 when he was arrested for trying to get into the White House, according to police records.

"We need to move on as a community and do what we can to curb this violence," Nashville Mayor David Briley told a news conference near the Waffle House, describing the attack as a tragedy.

Tips from people in the neighbourhood helped lead police to search through the woods about two miles (3 km) from the restaurant using sniffer dogs on the ground and aircraft overhead.

Metropolitan Nashville police Lieutenant Carlos Lara said as soon as a detective saw Reinking and ordered him to get on the ground, the suspect cooperated.

"He did not try to run," Lara said at the same news conference.

In addition to the four deaths, two people were injured in the attack.

The suspect was taken to a hospital for evaluation before he was booked by police. Reinking lived in Illinois before moving to Nashville. After the White House incident, Illinois authorities revoked his license to carry concealed weapons.

After that, Reinking's father had told police he would lock up his son's guns, which they said included the rifle used in the Waffle House shooting. But the father returned the weapons to his son, Nashville police said on Sunday.

Marcus Watson, an agent with the US Bureau of Alcohol, Tobacco, Firearms and Explosives, said Reinking's father, Jeffrey, could face federal charges if he knowingly transferred weapons to a person who was prohibited from owning them. The father was not immediately available for comment.

The killings in Tennessee's capital were the latest in a string of high-profile US mass shootings in which a gunman used an AR-15 style rifle. These include a Feb. 14 mass shooting when a former student killed 17 people with an AR-15 at Marjory Stoneman Douglas High School in Parkland, Florida.

In the area near the Nashville Waffle House, local resident Sheryl Friend, a woman in her 60s, said there was a sense of relief. "Everybody was taking precautions," she said. "You never knew which direction he was going to go and what was going to happen."

Reinking is accused of shooting two people to death outside the restaurant around 3:30 am (0830 GMT) on Sunday, and killing two inside. The suspect fled after a 29-year-old diner, James Shaw Jr, wrestled the rifle from him.

Shaw, grazed by a bullet during the attack, was praised for his courage, but on Sunday he denied he was a hero. "I just wanted to live," he said.

David Hogg, a Marjory Stoneman student and leader in a student movement for gun control that has emerged from the Parkland, Florida, attack, used Shaw's example to taunt the National Rifle Association, which lobbies for gun rights, on Twitter.

An NRA representative could not immediately be reached to comment.