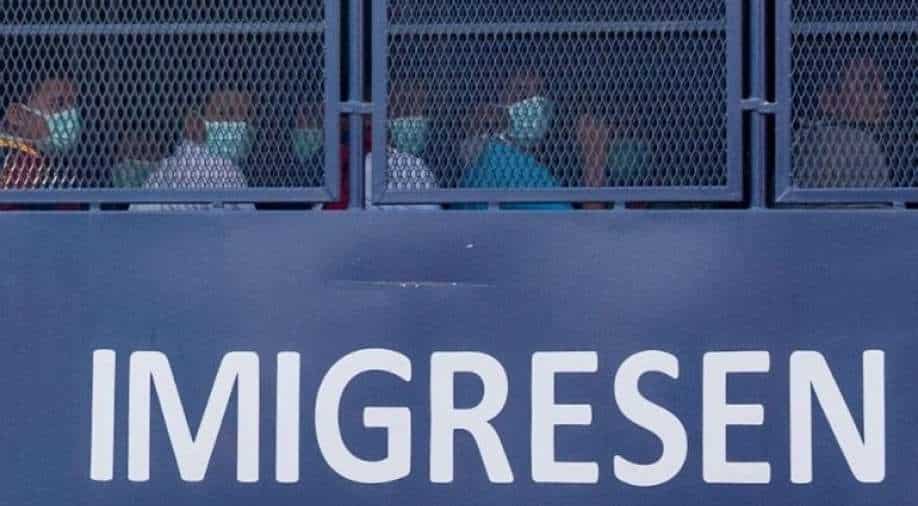 An immigration truck believed to be carrying Myanmar migrants from Malaysia back to their homeland, is seen heading towards the Naval base in Lumut, outside Kuala Lumpur on February 23, 2021. Photograph:( AFP )

The migrants, including members of vulnerable minorities, had already been taken in buses and trucks to a military base on Malaysia's west coast to be loaded onto waiting Myanmar navy ships

A Malaysian court ordered a temporary halt to a controversial plan to deport 1,200 Myanmar detainees to their homeland Tuesday weeks after a coup, following a last-ditch legal challenge.

The migrants, including members of vulnerable minorities, had already been taken in buses and trucks to a military base on Malaysia's west coast to be loaded onto waiting Myanmar navy ships.

The United States and the United Nations had criticised the plan, while rights groups said there were asylum seekers among those due to be repatriated.

Rights groups Amnesty International and Asylum Access had lodged a court challenge, arguing Malaysia would be in breach of its international duties by sending vulnerable people back to a country where they could be in danger.

The Kuala Lumpur High Court ordered a halt to the repatriation to allow a hearing to take place on Wednesday into the groups' bid to stop the deportations, their lawyer New Sin Yew told AFP.

Amnesty International Malaysia's executive director, Katrina Jorene Maliamauv, said that "the government must respect the court order and ensure that not one of the 1,200 individuals is deported today".

She called on authorities to grant the UN refugee agency access to the migrants set to be deported, so they can assess whether any should be granted refugee status.

"It's important to note that the stay of execution granted by the court does not mean the 1,200 are safe from being deported. They are facing life-threatening risks," she added.

"We urge the government to reconsider its plans to send this group of vulnerable people back to Myanmar."

Earlier, dozens of buses and trucks carrying the migrants and escorted by police cars arrived at the naval base in Lumut, according to AFP journalists at the scene.

Malaysia initially expressed "serious concern" at the coup -- but just days later, news emerged it had accepted an offer from the Myanmar junta to send warships to repatriate the detainees.

Officials insist those being sent back have committed offences such as overstaying their visas and no members of the persecuted Rohingya minority -- not recognised as citizens in Myanmar -- are among them.

But the detainees include members of the Christian Chin minority and people from conflict-riven Kachin and Shan states, according to Lilianne Fan, international director of the Geutanyoe Foundation, which works with refugees.

Malaysian authorities have blocked the UN refugee agency from immigration detention centres since late 2019, meaning they have not been able to determine who should be granted refugee status.

James Bawi Thang Bik, chairman of the Malaysia-based Alliance of Chin Refugees, said he was "shocked" to learn Chin were among those to be deported.

"They are refugees who came from a conflict area," he told AFP.

Malaysia is home to millions of migrants from poorer parts of Asia who work in low-pay jobs such as construction. As well as Myanmar, they come from countries including Bangladesh and Indonesia.