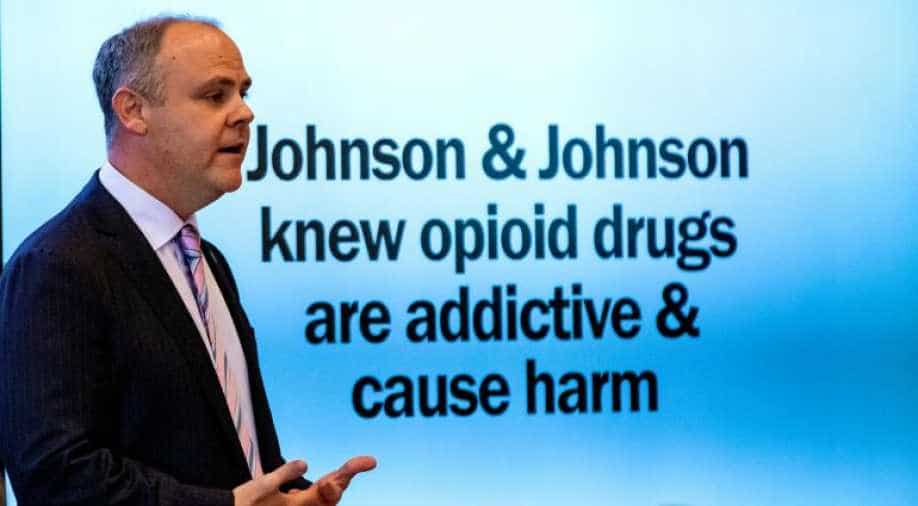 State's attorney Brad Beckworth presents information in the opening statements during the Oklahoma v. Purdue Pharma opioid trial at the Cleveland County Courthouse in Norman, Oklahoma, US May 28, 2019.  Photograph:( Reuters )

Oklahoma Attorney General Mike Hunter, who filed the multibillion-dollar case, argued in a state court in the city of Norman that J&J should be forced to pay for helping cause the 'worst manmade public health crisis in our state's history.'

Johnson & Johnson's greed led the drugmaker to use deceptive marketing to create an oversupply of painkillers that fuelled the US opioid epidemic, the state of Oklahoma alleged at the start of the first trial to result from lawsuits over the drug crisis.

Oklahoma Attorney General Mike Hunter, who filed the multibillion-dollar case, argued in a state court in the city of Norman that J&J should be forced to pay for helping cause the "worst manmade public health crisis in our state's history."

His case is the first to reach trial from around 2,000 lawsuits filed by state and local governments seeking to hold pharmaceutical companies responsible for a drug epidemic the US Centers for Disease Control and Prevention says led to a record 47,600 opioid-related overdose deaths in 2017.

The non-jury trial came after Oklahoma resolved claims against OxyContin maker Purdue Pharma LP in March for $270 million and against Teva Pharmaceutical Industries Ltd on Sunday for $85 million, leaving only J&J as a defendant.

Beckworth said J&J, which sold the painkillers Duragesic and Nucynta, marketed the opioids as "safe and effective for everyday pain" while downplaying their addictive qualities, helping create a drug oversupply.

He said J&J was motivated to boost prescriptions not only because it sold opioid painkillers, but because it also grew and imported raw materials opioid manufacturers like Purdue used.

"If you have an oversupply, people will die," Beckworth said.

J&J lawyer Larry Ottway countered that its products made up a small share of opioids prescribed in Oklahoma and carried US Food and Drug Administration-approved labels that warned of the addictive risks.

"You have to examine the details because facts are stubborn things," he said.

He also argued Oklahoma was seeking to "stretch" the bounds of a public nuisance statute in order to force it to pay up to $17.5 billion to help the state address the epidemic for the next 30 years.

The case is being closely watched by plaintiffs in other opioid lawsuits, particularly the 1,850 cases consolidated before a federal judge in Ohio, who has been pushing for a settlement ahead of an October trial.

Some plaintiffs' lawyers have compared the cases to litigation by states against the tobacco industry that led to a $246 billion settlement in 1998.