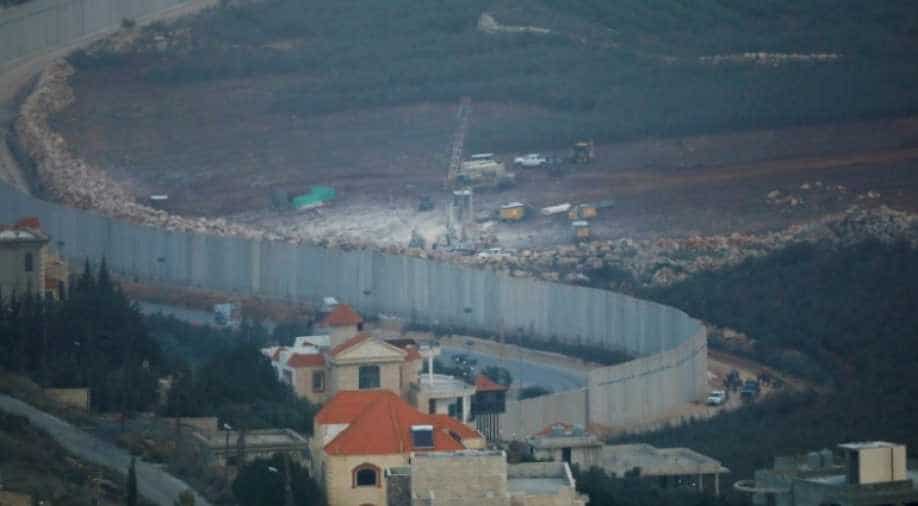 Israeli drilling equipment is seen next to the border with Lebanon, near the Lebanese village of Kfar Kila. Photograph:( Reuters )

Israel's military said earlier this week that it had found a number of passages dug across the Israel-Lebanon border to be used in carrying out attacks inside Israel. The Israeli military sent mechanical diggers, troops and anti-tunneling equipment to the border to shut them down.

Israel is prepared to take action in Lebanon against Hezbollah cross-border tunnels if necessary, an Israeli cabinet minister said on Friday.

Israel's military said earlier this week that it had found a number of passages dug across the Israel-Lebanon border to be used in carrying out attacks inside Israel. The Israeli military sent mechanical diggers, troops and anti-tunneling equipment to the border to shut them down.

The Israeli military, which launched the operation on Tuesday, has said its activity would, for now, stop on the Israeli side of the border.

But Israeli news media on Thursday quoted a unnamed senior official saying that Israel could extend its activity into Lebanon, and on Friday Israeli Intelligence Minister Israel Katz reiterated that messages.

What form the action would take was not clear. Over the past year, at least 15 tunnels from the Gaza Strip into Israel were found and destroyed, the Israeli military said.

The United Nations peacekeeping Interim Force in Lebanon (UNIFIL), confirmed the existence of a tunnel near the "blue line" frontier between the two countries on Thursday, describing it as a "serious occurrence".

In the aftermath of the Israeli tunnel announcement, the situation has remained calm on both sides of the border. But the Israeli operation has brought renewed attention to a frontier across which Israel and Hezbollah last fought a war in 2006.

The Israeli military said in a statement on Thursday that it "holds the Lebanese government, the Lebanese Armed Forces and United Nations Interim Force in Lebanon responsible for all events transpiring in and emanating from Lebanon."

It added that an Israeli military commander had shown one of the tunnels to the head of UNIFIL, Major-General Stefano Del Col, and it urged UNIFIL and the the Lebanese army to clear the area of tunnels.

UNIFIL said in its statement it was "engaged with the parties to pursue urgent follow-up action".

Lebanese Foreign Minister Gebran Bassil has instructed the country's envoy to the U.N. to complain that Israel is waging "a diplomatic and political campaign against Lebanon in preparation for attacks against it", Hezbollah's l-Manar TV said.

Since the 2006 war, Israel has largely refrained from striking at Hezbollah on Lebanese soil, but it has carried out dozens of attacks in Syria against what it said were advanced weapons shipments to the Iranian-backed Shi'ite group.