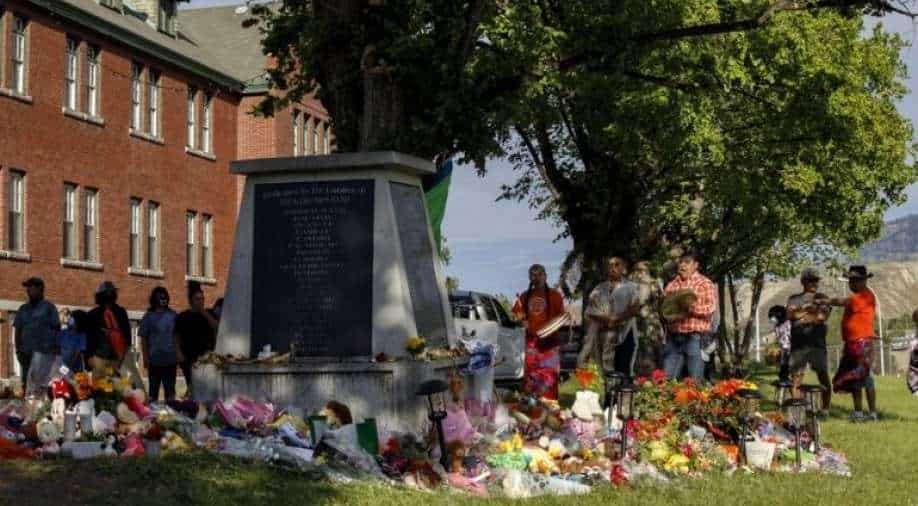 Charles Goforth of Peepeekisis Cree Nation of Saskatchewan (R) is joined by Cherokee Eagletail and Ansen Eagletail of Tsuut'ina Nation of Alberta as they drum and sing at the former Kamloops Indian Residential School to honour the 215 children whose remains have been discovered buried near the facility, in Kamloops, British Columbia, Canada, on June 3, 2021. Photograph:( AFP )

An indigenous nation in Canada says it has found 751 unmarked graves at the site of a former residential school in Saskatchewan.

Following the discovery of 751 unmarked graves only weeks after a similar finding in British Columbia caused a fresh reckoning over the country's colonial past, a First Nation in Canada's Saskatchewan province is treating a now-defunct residential school as a "crime scene."

This is the largest discovery of such remains in Canadian history to date.

The Cowessess First Nation completed a radar sweep of the land surrounding the Marieval Indian Residential School, resulting in the "horrific and disturbing finding of hundreds of unmarked graves," according to a media advisory.

The Federation of Sovereign Indigenous Nations (FSIN) stated in the alert that "the number of unmarked graves will be the most significant to date in Canada."

The discovery comes soon after another mass grave was unearthed by the Tk’emlups te Secwepemc First Nation at the former Kamloops Residential School in British Columbia last month.

The remains of 215 children, some as young as three years old, were found buried on the school grounds – once the largest in Canada’s residential school system.

The First Nations are a confederation of indigenous peoples from across Canada. In Canada, there are 634 recognised First Nations governments or bands. The provinces of Ontario and British Columbia account for roughly half of the total.

As the federal and provincial governments, as well as private corporations, provide financing for First Nations to employ ground-penetrating radar technology to hunt for gravesites, indigenous leaders and archaeologists believe that more such discoveries will be made.

More than 150,000 First Nations students were forced to attend state-funded Christian schools from the 19th century until the 1970s as part of a scheme to assimilate them into Canadian society.

They were forced to convert to Christianity and were forbidden from speaking their original tongues. Many people were beaten and verbally abused, and up to 6,000 people are thought to have been killed as a result.

In 2008, the Canadian government apologised in Parliament for the widespread physical and sexual abuse in Indigenous schools. Many students recall being assaulted for speaking their original languages, as well as losing contact with their parents and cultural traditions.