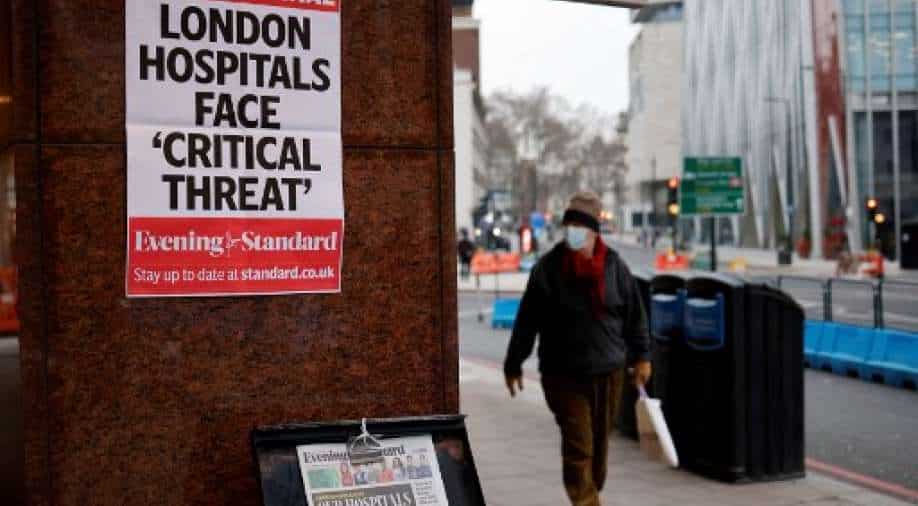 Some of the same mutations detected in the patient, along with other changes, were appearing again and again in newly infected people, mostly in Britain

All at once, the coronavirus seemed to change.

For months, Dr. Steven Kemp, an infectious disease expert, had been scanning a global library of coronavirus genomes. He was studying how the virus had mutated in the lungs of a patient struggling to shake a raging infection in a nearby Cambridge hospital, and he wanted to know if those changes would turn up in other people.

Then, in late November, Kemp made a startling match: Some of the same mutations detected in the patient, along with other changes, were appearing again and again in newly infected people, mostly in Britain.

Worse, the changes were concentrated in the spike protein the virus uses to latch onto human cells, suggesting that a virus already wreaking havoc around the world was evolving in a way that could make it even more contagious.

Also read| 'We may never find patient zero': WHO urges countries to cooperate

“There’s a load of mutations that occur together at the same frequency,” he wrote on Dec. 2 to Dr. Ravindra Gupta, a Cambridge virologist. Listing the most troubling changes, he added, “ALL of these sequences have the following spike mutants.”

The two researchers did not yet know it, but they had found a new, highly contagious coronavirus variant that has since stampeded across Britain, shaken scientists’ understanding of the virus and threatened to set back the global recovery from the pandemic.

Word raced through a consortium of British disease scientists, longtime torchbearers in genomics who had helped track the Ebola and Zika epidemics. They gathered on Slack and video calls, comparing notes as they chased down clues — among them, a tip from scientists in South Africa about yet another new variant there. Still others have since emerged in Brazil.

For nearly a year, scientists had observed only incremental changes in the coronavirus and expected more of the same. The new variants forced them to change their thinking, portending a new phase in the pandemic in which the virus could evolve enough in time to undermine vaccines’ effectiveness.

Also read| A second economic crisis for Biden, but a different first response

British lawmakers announced the news Dec. 14, warning that the variant was spreading faster than previous ones.

But the road to its discovery was laid down to little acclaim in March, when Britain decided to begin sequencing coronavirus samples en masse. The country produces half the world’s inventory of coronavirus genomes, providing an unparalleled view of how the virus changes and how people brought it into Britain last year and are now carrying the variant out.

For Britain, the discovery came too late to prevent a punishing new wave of COVID-19 that has put its hospitals on the brink of having to deny lifesaving care. The variant was already spreading fast, abetted by the government’s lax restrictions during the fall and early winter.

But Britain sounded an alarm for the world, allowing countries to close their borders and start frantically searching for a variant they otherwise might not have noticed for months. British scientists quickly published studies that convinced skeptics of its potency.

“The U.K.’s got many things wrong about this pandemic — mainly, not learning lessons about the importance of reacting early,” said Neil Ferguson, a public health researcher and government adviser. “But the U.K. has a fairly unparalleled surveillance system for COVID. We can monitor very small changes in the virus.”

Labs around Britain, after testing swabs for the virus, send the leftover material in refrigerated vans to the Wellcome Sanger Institute, a genomics lab, where they are stored in cavernous freezers.

There, robots separate out the positive samples and deposit them into the wells of tiny, muffin-tinlike plates. Machines then map their genomes, said Jeffrey Barrett, who directs the sequencing project, producing 30,000 letter-long genetic codes that are uploaded to an internet library. The task of making sense of mutations falls to biologists like Andrew Rambaut, a professor in Edinburgh, who determine where they fit on the evolutionary tree.

The effort has generated more than 165,000 sequences in Britain. The United States, with five times as many people, has sequenced about 74,000 genomes. Germany has sequenced about 3,400, less than half of what Britain uploaded to the global database Thursday alone.

“It has totally revolutionized how we’re dealing with the virus,” said Judith Breuer, a virologist at University College London.

The campaign took shape March 4, before 100 coronavirus infections had been found in Britain, when a Cambridge microbiologist, Sharon Peacock, sent a flurry of emails to British genomicists, asking each, “Can you call me, please?”

“It’s a close community here, and in March it effectively put aside any rivalries, any egos, and just said, ‘We can play a critical role in managing the pandemic,’” said Thomas Connor, a scientist in Wales who built a platform for collating and analyzing genomes.

Among the samples sequenced last summer were those of a man in his 70s with lymphoma, admitted in May to a Cambridge hospital for treatment of COVID-19. Gupta, a part-time clinician, began treating the patient, whose anti-cancer drugs had depleted his immune response. Sequestered in an isolation room, the patient struggled to breathe. Even after several rounds of treatment, including plasma with antibodies from recovered patients, the virus did not disappear.

Instead, it mutated. Britain’s sequencing efforts opened a window into those changes: Over 101 days in the hospital, the viral particles coursing through the man’s lungs were sequenced 23 times, a treasure trove of clues.

The patient died in August, seemingly without having infected anyone else. But the mutations in his virus eventually supplied scientists with a leading theory for how the British variant originated: by eluding the immune defenses of someone like the Cambridge patient who had a weakened immune system and a long-lasting infection.

“We call this the gold-standard patient for assessing different viral populations in a host,” Kemp said.

One mutation the patient had, labeled 69-70del, changes the shape of the spike protein. Another, N501Y, can help the protein bind more tightly to human cells.

Kemp searched for those changes every few days in the global database, finding scarce reason to worry. Then, in late November, abruptly, he noticed many genomes, mostly from Britain, that had those mutations and a host of others that could change how the virus entered human cells. He summoned Gupta to his computer for a look.

Eventually, British scientists detected 23 mutations that distinguished these genomes from the earliest known version in Wuhan, China — enough to be a considered a new variant, since labeled B117. On an evolutionary tree that Kemp made, it stood apart like a lone, spindly branch.

“I was not expecting anything like this,” Gupta said. “Back at the end of November, it was all about vaccine hope, and there was no whiff of new variants coming along.”

The number of mutations on the spike protein particularly rattled him, he said, calling it “a ‘Wow’ moment.”

At the same time, England’s public health experts were puzzling over an unexplained outbreak of coronavirus cases. A lockdown had tempered the virus across England, but not in Kent, a county of London commuters and fruit orchards in the southeast. Cases were emerging in schools. One in 328 residents was infected.

Only on Dec. 8, at their regular meeting with genomicists, did the public health officials conclude that the cause was likely a new variant. Looking back through their databases, scientists discovered that it had first been collected in September and had spread as people returned to offices and patronized restaurants and pubs at the government’s urging.

Researchers eventually became persuaded that the variant was, in fact, more transmissible — roughly 30% to 50% more — but only after they had assembled a patchwork of less conclusive clues.

“There’s no one totally unambiguous line of evidence; science only generates that kind of surety over longer time periods,” said Oliver Pybus, an Oxford evolutionary biologist. “It was more a case of different, independent lines of evidence coming together.”

After scientists presented their conclusion Dec. 11 to a government advisory body, Ferguson, the public health researcher, became concerned that it would “almost certainly require us to go into another lockdown.” He texted Prime Minister Boris Johnson’s chief scientific adviser, warning about the variant.

By Dec. 22, government scientists said that strict measures, including school closures, were needed to suppress the variant. But Johnson allowed people in parts of England to gather on Christmas and did not impose an England-wide lockdown until Jan. 4.

The variant is now estimated to account for more than 80% of positive cases in London and at least one-quarter of infections elsewhere in England and has turned up in more than 50 countries. U.S. health officials warned Friday that the British variant could be the dominant source of infection in the United States by March.

In recent days, Gupta and Kemp have begun using blood serum from vaccinated people to determine if the variant may weaken the potency of the vaccines.

“The world was being told for a long time that mutations don’t really matter from the coronavirus,” Gupta said. “But we found that mutations did come, and they did have an impact on the virus’s fitness.”