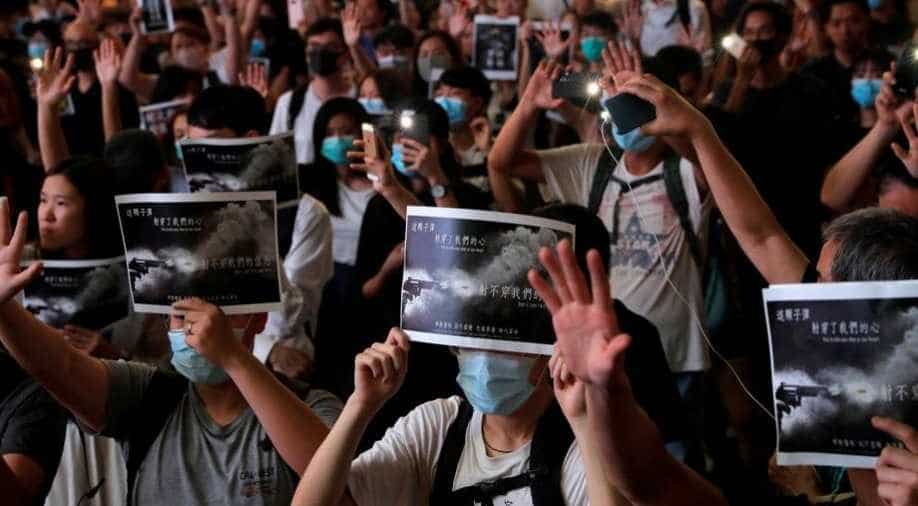 People attend a march in Causeway Bay in solidarity with the student protester who got shot by police with live ammunition in Hong Kong, China. Photograph:(Reuters)
Follow Us

Police urged the government to impose curfews to help curb the escalating violence in the Chinese-ruled city, where officers have become a target of protesters amid accusations of excessive force.

Hong Kong demonstrators clashed with police into the early hours of Thursday, throwing petrol bombs and venting their anger over the shooting of a teenager earlier in the week, as months of anti-government protests showed no sign of letting up.

Police urged the government to impose curfews to help curb the escalating violence in the Chinese-ruled city, where officers have become a target of protesters amid accusations of excessive force.

Activists went on the rampage in districts across the Asian financial hub late into the night, setting fires, blocking roads and vandalising shops and metro stations as police fired tear gas to disperse them.

"Wherever there are protests nearby I'll come ... I'm out tonight for a simple reason. You don't shoot a teenager at point-blank range," said Alex Chan, an interior designer at a protest in the bustling shopping district of Causeway Bay.

"These protests will continue and we won't give up."

Thousands took to the streets on Wednesday to denounce the shooting by police of an 18-year-old secondary-school student, which police said was an act of self-defence.

The student was shot at point-blank range as he fought a police officer with a metal pipe on Tuesday when demonstrators hurled petrol bombs at police who responded with tear gas, rubber bullets and water cannon.

Lam Chi-wai, chairman of Junior Police Officers Association, urged the city's leader to impose a curfew to maintain public order, according to a statement released on Wednesday.

"We are only an enforcement agency with limited power under the law. When facing such a series of massive rioting incidents, we cannot work alone - clapping only with one hand - without appropriate measures and support from top-level," Lam said.

The Hong Kong public has become increasingly hostile towards police amid accusations of heavy-handed tactics. Police say they have shown restraint in the face of increased violence.

The lawyer for an Indonesian journalist injured when police fired a projectile during protests on Sunday said she will be left blind in one eye.

The former British colony has been rocked by months of protests over a now-withdrawn extradition bill that would have allowed people to be sent to mainland China for trial, but have evolved into calls for democracy, among other demands.

The opposition to the Beijing-backed government has plunged the city into its biggest political crisis in decades and poses the gravest popular challenge to President Xi Jinping since he came to power.

Protesters are also angry about what they see as creeping interference by Beijing in their city's affairs despite a promise of autonomy in the "one country, two systems" formula under which Hong Kong returned to China in 1997.

China dismisses accusations it is meddling and has accused foreign governments, including the United States and Britain, of stirring up the anti-China sentiment.