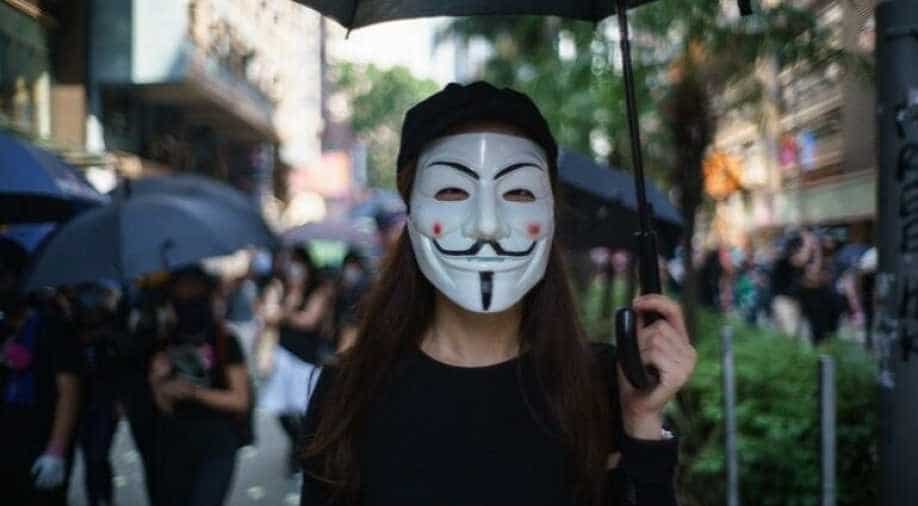 The face coverings, made popular by the comic book and film "V for Vendetta", have been embraced by multiple protest movements in recent years, particularly Anonymous hactivists and Occupy Wall Street.

As Hong Kong raged with the worst political violence so far this summer, many of those hitting the streets adopted a new symbol -- smiling Guy Fawkes masks.

The face coverings, made popular by the comic book and film "V for Vendetta", have been embraced by multiple protest movements in recent years, particularly Anonymous hactivists and Occupy Wall Street.

But until recently they had not made much of an appearance at the huge pro-democracy demonstrations currently battering Hong Kong.

That changed on Tuesday when China celebrated 70 years of Communist Party rule with a massive military parade in Beijing. Protesters in Hong Kong dubbed the celebrations a "Day of Grief", and took to the streets in huge numbers as battles raged for hours with police.

The masks first appeared in the early 1980s in the cult-hit comic "V for Vendetta" by British writer Alan Moore.

In his book a masked anarchist takes on an imaginary British fascist government by blowing up the Houses of Parliament -- echoing the ultimately unsuccessful actions of the real Fawkes in 1605, who attempted a Catholic rebellion.

A 2005 film based on the comic brought Moore's character mass appeal.

One man, protesting on Tuesday while wearing the mask, said he took inspiration from the book's protagonist as demonstrators push communist China for full democratic freedoms.

"The character of Vendetta is a symbol of anti-totalitarianism around the world. I believe this vivid character would bring international attention and concern," he told AFP.

Later that day an 18-year-old demonstrator was shot in the chest as he and a group attacked police officers.

The incident, which police have said was justified, has sparked more protester fury.

At a sit-in outside the teenager's school on Wednesday, a person delivered a statement condemning police -- hiding his face behind a Guy Fawkes mask.