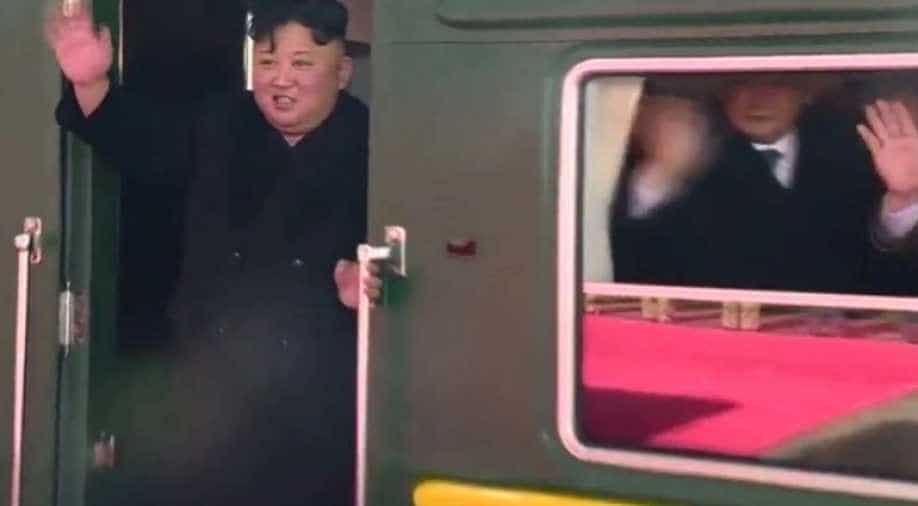 The train apparently bypassed Beijing and is now thought to be chugging south en route to Vietnam, which is hastily preparing for the second meeting between Kim and US President Trump after their historic first summit in Singapore last June.

The train station on the Vietnam-China border where Kim Jong Un is expected to arrive by rail was closed to the public and surrounded by armed guards on Monday, days ahead of the North Korean leader's summit with Donald Trump.

Kim boarded his trademark olive-green train in Pyongyang on Saturday and its armoured carriages were later spotted crossing a bridge into China.

The train apparently bypassed Beijing and is now thought to be chugging south en route to Vietnam, which is hastily preparing for the second meeting between Kim and US President Trump after their historic first summit in Singapore last June.

Sources in Vietnam said Kim could arrive at the Dong Dang border station in the early hours of Tuesday following his epic 4,000 kilometres, two-and-a-half-day journey.

His motorcade is likely to drive from Dong Dang to Hanoi and in an unprecedented move, the entire 170-kilometre stretch of road will be completely closed from 6:00 am to 2:00 pm Tuesday.

An AFP reporter at the scene saw armed guards stationed at Dong Dang station on Monday morning, while workers tended to the rail tracks.

"(The station) is closed, no public access. We don't know when it's closed until but around tomorrow," a guard told AFP, requesting anonymity.

Ifeng, the online Chinese-language news website of Hong Kong-based Phoenix Television, posted a video on its Twitter-like Weibo account showing what it described as Kim's special train passing through Wuhan in the central province of Hubei at 7:15 am local time on Monday.

Vietnam said on Saturday that Kim would make an official visit to the country "in the coming days", but did not say whether that would be before or after the Trump-Kim summit on February 27-28.

Two sources told AFP on Monday that Kim would stay at a modern hotel in downtown Hanoi, about one kilometre (mile) from the colonial-era Government Guesthouse where the summit could take place.

The Melia hotel boasts of its "elegant interiors with gorgeous views of the city" and is connected to Hanoi's only Rolls-Royce dealership catering to the city's growing class of super-rich.

A staff member told AFP this week the hotel was fully booked until early March, but would not be drawn on any VIP guests.

The White House press centre will be set up at the same hotel, and North Korean security personnel were seen entering the building on Sunday.

During his trip, Kim is also expected to visit industrial zones in Vietnam's provinces of Quang Ninh and Bac Ninh, which is home to a Samsung factory.

Trump and Kim's first meeting ended with a vaguely worded statement to work towards the "complete denuclearisation" of the Korean peninsula, and both sides are under pressure to walk away from this week's summit with concrete deliverables.

Journalists covering US protests face the ire of police, demonstrators