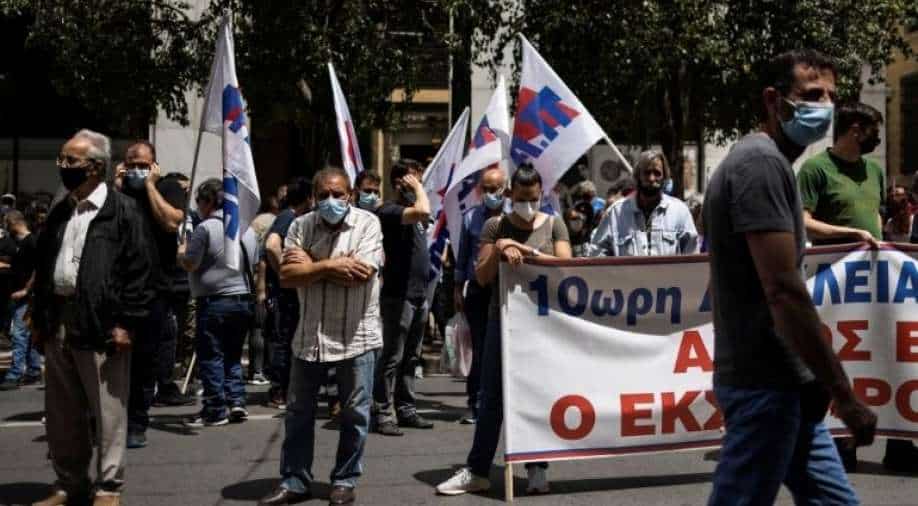 Members of the communist-affiliated trade union PAME demonstrate outside the Labour Ministry against a planned labour bill in Athens, Greece Photograph:(Reuters)
Follow Us

Greece's conservative government on Wednesday outlined plans to overhaul "antiquated" labour laws by liberalising working hours, a move criticised by the left-wing opposition and unions who fear the changes will undermine worker rights.

"The labour law is antiquated," Hatzidakis told a news conference. "The core of the bill goes back to 1982. In 1982 the Internet, let alone teleworking, was a distant dream."

Prime Minister Kyriakos Mitsotakis said the bill was intended to protect workers. "It strengthens their rights..., corrects injustices of the past. In short, it gives power to the employee," he tweeted.

The most contentious part of the bill introduces flexibility to the eight-hour workday by allowing employees to work up to 10 hours on one day and fewer on another, or take time off.

It will also give workers the right to disconnect outside of office hours - for example, refuse any work on off-days, or to check emails - as in France and Italy.

Further, it would introduce a "digital work card" to monitor employees working hours in real time, as well as increase legal overtime to 150 hours a year.

However, Greece's main civil servants union ADEDY, which staged a 24-hour strike against the bill last week, says the government seeks to raise the eight-hour working day to 10 hours and scrap the five-day working week and collective bargaining agreements.

As Hatzidakis spoke, dozens of members of the communist-affiliated trade union PAME protested outside the labour ministry and painted "Hands Off the 8-Hour Day" in red on one of its walls.

PAME also called a demonstration against the bill in central Athens on Thursday.

The left-wing Syriza opposition has criticized the bill, saying it restricts employee rights at a time when workers risk more job losses due to the coronavirus pandemic.

"(It) is trying to use the pandemic as an opportunity to impose the most anti-popular (measure) a Greek government has ever brought against the world of work: the abolition of the eight-hour working day."