For Russia's detained protesters, rights group is first on the scene 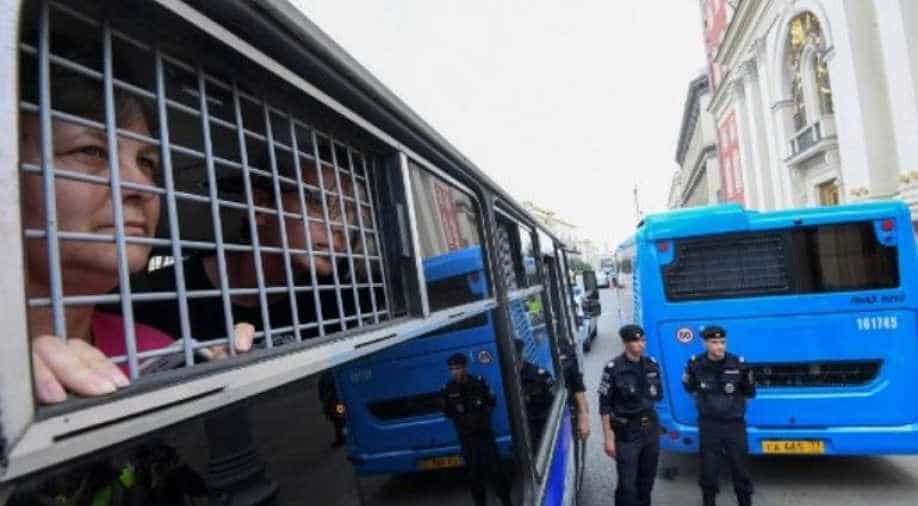 Detained protesters look out from the window of a police bus during an unauthorised rally demanding independent and opposition candidates be allowed to run for office in local election in September, outside the mayor's offices in Moscow. Photograph:( AFP )

OVD-Info, which has around 27 staff, more than 300 volunteers and a small office in Moscow, is the first port of call for those detained by police at protests.

What started as a Facebook post during a wave of mass protests in Russia eight years ago has turned into a rights group that helps arrested demonstrators one in increasing demand as police crackdown hard on opposition rallies.

OVD-Info, which has around 27 staff, more than 300 volunteers and a small office in Moscow, is the first port of call for those detained by police at protests.

The group has a 24-hour hotline, a large team of lawyers and is seen as a reliable source for the number of overall arrests at events

The group started in December 2011, when two young Muscovites were looking for their friends who had been detained at rallies against Vladimir Putin's planned return to the Kremlin after a term as prime minister.

The two men, Grigory Okhotin and Daniil Beilinson, scoured police stations and wrote up a list of the detainees that they posted on Facebook.

It was the first of many posts by OVD-Info, whose name derives from an abbreviation for the police station.

Eight years on, the NGO says it aims to make sure no one faces the vagaries of the Russian criminal justice system alone.

The group has been in the spotlight over the last month, as some 3,000 people have been detained at ongoing Moscow protests calling for fair local elections.

Out of these, 13 face serious criminal charges for allegedly organising "mass disorder" and violence against police.

"All the same, I can assure you that they were protesting peacefully," said 54-year-old Alla Frolova, the group's legal coordinator.

During and after a protest, OVD-Info is the first number to call for those detained. It notes the police stations where those arrested are heading to and sends lawyers.

The NGO tries to deploy lawyers promptly, as police stations in the country are known for their confusing procedures and the risk of violence against detainees.

"They do hide some things from us because the law gets broken many times," said Frolova, who nevertheless stresses that the group seeks dialogue with police.

One of those to receive assistance from the NGO recently was Moscow student Alexander Finiarel, 24, who was detained at demonstrations on July 27 and August 3.

OVD-Info provided him with a lawyer free of charge after his friends reported him to the group as among the detained.

"OVD-Info gave us some advice on the right way to behave with the police. And they calmed us down, basically," said Finiarel.

"We had a sense that they were looking out for us and helping us."

The NGO, whose staff are mainly in their 20s and 30s, uses social media and a chat on the Telegram messenger service to gain information on detentions and post updates.

The group is part of a "new generation of rights activists," says Frolova even if one of its major donors is a long-running Russian rights group Memorial, which documents Soviet-era persecutions as well as highlighting current abuses.

Frolova was in court on Wednesday to watch a case against Konstantin Kotov, an activist who risks five years in jail for breaking various laws around holding protests.

Kotov has a free lawyer provided by OVD-Info, Maria Eismont.

Eismont is a former journalist who retrained as a lawyer. The recent wave of detentions has kept her busy.

"As soon as I get home before I have time to drink a glass of wine, they're calling me," she said with a smile.

She goes to help detainees at police stations and later represents them in court.

"This is a political battle, not a legal one... I'm not naive and I know the verdict isn't decided here (in court). But in any case, all the documents have to be here."

"Afterwards there's always the chance of winning at the European Court of Human Rights."

When cases have gone through courts in Russia, the NGO says it files as many appeals as possible with the European court.

OVD-Info also receives a grant from the rights watchdog Council of Europe which accounted for almost 35 per cent of its budget last year. The rest comes from donations and fundraising.

After the protests began this summer, OVD-Info says it received more than 100,000 euros in donations in July, a record.

Leonid Drabkin, 27, who is in charge of fundraising, says that such generosity is hardly surprising.

"When you're a light in the darkness, people are bound to trust you."