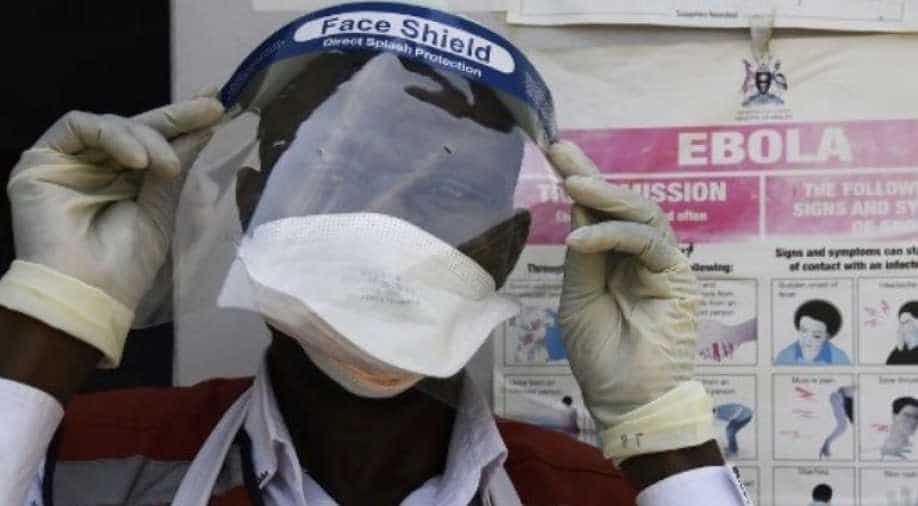 A health worker puts on protective gears as he tries to take safety precaution against Ebola virus. Photograph:( AFP )

Goma, a lakeside city of 1 million people, is more than 350 km (220 miles) south of where the second-largest Ebola outbreak on record was first detected a year ago.

The first case of Ebola in the eastern Congo city of Goma was discovered on Sunday, officials said, raising concerns the virus could spread quicker in a densely populated area close to the Rwandan border.

Goma, a lakeside city of 1 million people, is more than 350 km (220 miles) south of where the second-largest Ebola outbreak on record was first detected a year ago. But the haemorrhagic fever has gradually spread south, infecting nearly 2,500 people and killing more than 1,600.

The patient was a priest who became infected during a visit to the town of Butembo, 200 km (124 miles) north of Goma, where he interacted with Ebola patients, Congo's health ministry said in a statement.

He developed symptoms last week before taking a bus to Goma on Friday. When he arrived in Goma on Sunday he went to a clinic where he tested positive for Ebola.

"Due to the speed with which the patient has been identified and isolated, as well as the identification of all bus passengers from Butembo, the risk of spreading to the rest of the city of Goma remains low," the ministry said.

Goma has been preparing for the arrival of Ebola for a year, setting up hand-washing stations and making sure moto-taxi drivers do not share helmets.

But in more rural areas, the virus has been hard to contain. Local mistrust of health officials and militia violence have hobbled containment efforts and caused the number of new cases to spike.

Ebola causes diarrhoea, vomiting and hemorrhagic fever and can be spread through bodily fluids. An epidemic between 2013 and 2016 killed more than 11,300 people in West Africa.