Europe's heatwave burns on, but eases from record highs 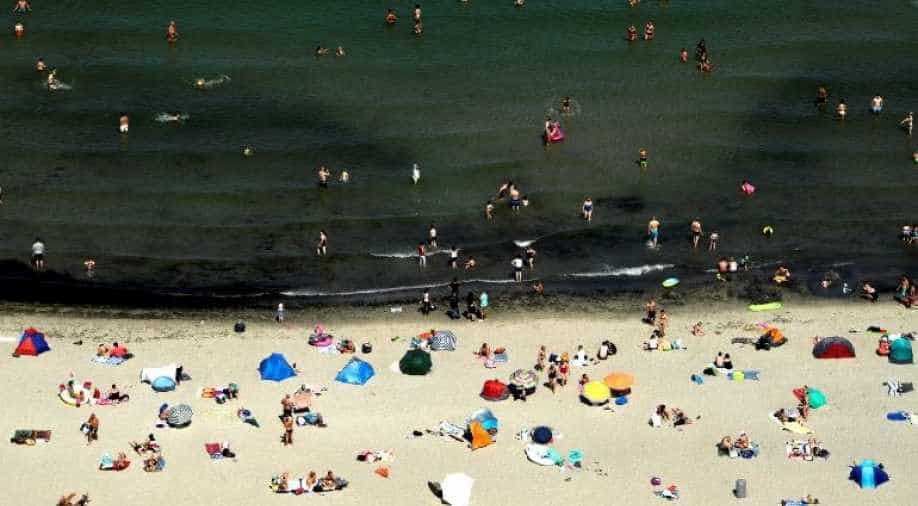 People enjoy sunbathing at a beach by the Baltic Sea in Travemuende, Germany. Photograph:( Reuters )

Meteorologists say a weakening of the high-level jet stream is increasingly causing weather systems to stall and leading summer temperatures to soar.

A four-day heatwave across western Europe that killed seven people began to ease slightly on Sunday, as temperature alerts were cut back and wildfires slowly brought under control.

Most of the fires that had broken out Spain in recent days were stabilised, but firefighters were struggling to control a blaze in the central provinces of Toledo and Madrid that had burned more than 20 square kilometres since Friday.

In the northeastern town of La Almunia de Dona Godina, the temperature hit a scorching 42.4 Celsius. But five of Spain's 50 provinces were downgraded from "extreme" weather risk, leaving just two at the highest level, with 31 on weather alert.

In France, which experienced a national record of 45.9 Celsius in the south on Friday, temperatures were set to fall gradually.

In Paris, a ban imposed on older cars to counter heat-related pollution was likely to be lifted on Monday, authorities said.

Nevertheless, some 25 out of around 90 French administrative departments have restricted water use, not least for farmers.

Meteorologists say a weakening of the high-level jet stream is increasingly causing weather systems to stall and leading summer temperatures to soar. Five of Europe's hottest summers in the last 500 years have happened in this century.

"A race against global warming"

The World Meteorological Organization said this week that the European heatwave was "absolutely consistent" with extremes linked to the impact of greenhouse gas emissions.

In Frankfurt, 3,000 athletes took part in an Iron Man endurance race despite the heat.

"It felt like a race against global warming - you could have fried an egg on my head," said Sebastian Kienle, who finished second in the men's race.

In the women's event, race leader Sarah True of the United States collapsed within a kilometre of the finish line of the closing marathon stage.

True, who had already completed a 3.8 kilometres swim and 185 kilometres bike ride, was carried off the course and had to be restrained by first-aid workers concerned for her wellbeing.

At a post-race news conference, she said she was feeling better, but did not remember the final kilometres of the race.

Addressing thousands of people in St Peter's Square, Pope Francis said he was praying for those suffering most from the heat wave - the sick, the old, construction workers and those who had to labour outdoors.

"May no-one be abandoned or exploited," he said.

On Saturday, one 53-year-old crashed after feeling unwell while competing in a cycling race in France's Ariege region, in the foothills of the Pyrenees, and died, local public prosecutor Laurent Dumaine said on Sunday.

The race was called off after several participants were taken sick due to the heat, organisers said.

Another cyclist died on Saturday from the effects of heat in the southern region of Vaucluse, authorities said, and at least three people died the same day in central and northern Italy.

Spain had two heat-related deaths on Thursday and Friday.