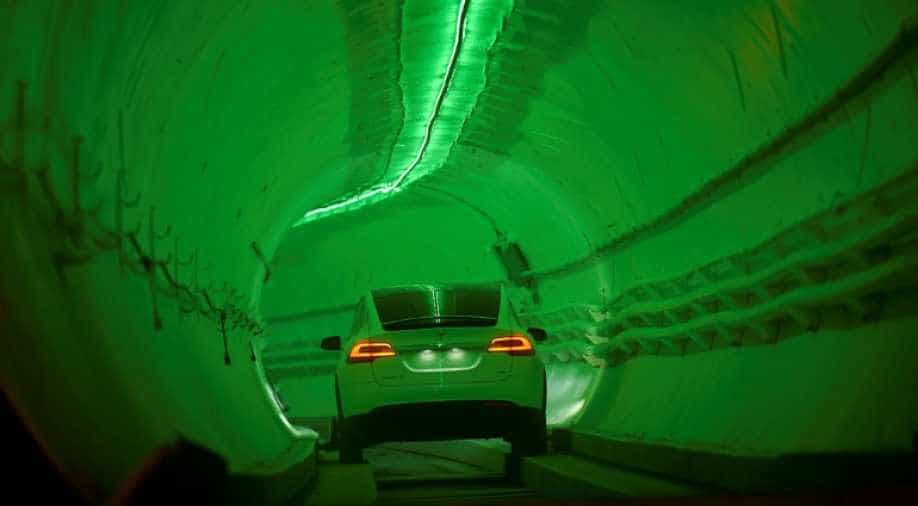 A modified Tesla Model X drives in the tunnel entrance before an unveiling event for the Boring Co. Hawthorne test tunnel in Hawthorne, California, US, December 18, 2018. Photograph:( Reuters )

Musk has advertised the proof-of-concept tunnel as a first step toward developing a high-speed subterranean network capable of whisking vehicles and pedestrians below the "soul-destroying" street traffic of Los Angeles at up to 150 miles per hour. But such a system has a long way to go.

Billionaire entrepreneur Elon Musk made a brief public appearance late on Tuesday to unveil the first tunnel completed by the underground transit venture he launched two years ago as an ambitious remedy to Los Angeles' infamously heavy traffic.

But contrary to some of his own hype from several months ago, free rides were not part of the grand opening.

In a 30-minute presentation carried by live webcast, Musk touted the newly finished 1.14-mile (1.83 km) tunnel segment as a breakthrough in low-cost, fast-digging technology being pioneered by his nascent tunneling firm, the Boring Company.

Musk has advertised the proof-of-concept tunnel as a first step toward developing a high-speed subterranean network capable of whisking vehicles and pedestrians below the "soul-destroying" street traffic of America's second-largest city at up to 150 miles per hour. But such a system has a long way to go.

The new tunnel was excavated along a path that runs not through Los Angeles but beneath the tiny adjacent municipality of Hawthorne, where Musk's Boring Company and his SpaceX rocket firm are both headquartered.

Musk, best known as head of the Tesla Inc electric car manufacturer and energy company, launched his foray into public transit after complaining on Twitter in December 2016 that L.A.'s traffic was "driving me nuts," promising then to "build a boring machine and just start digging."

In May, the company gave the world a preview of the Hawthorne tunnel, posting a fast-forward video of its interior shot by a camera traveling the length of the cylindrical passageway, which measures about 12 feet (3.7 m) in diameter.

On Tuesday, Musk put the total price tag for the finished segment at about $10 million, including the cost of excavation, internal infrastructure, lighting, ventilation, safety systems, communications and a track.

By comparison, he said, digging a mile of tunnel by "traditional" engineering methods costs up to $1 billion and takes three to six months to complete.

FASTER THAN A SNAIL?

He also invoked his favorite comparison with a snail, a creature he said moves 14 times faster than the speed of a typical tunneling machine. "Aspirationally, we should be slightly faster than a snail," he said.

Musk did not say how long it took to burrow his new tunnel, which ended up running short of the 2-mile easement his company originally requested for the project.

But he showed pre-recorded video footage of a newly built elevator station designed to carry passengers from street level to the tunnel's subterranean entryway. The video featured a modified Tesla Model X luxury car on the elevator.

When fully operational, the "loop" system as Musk envisions it will consist of passenger- and automobile-carrying platforms called "skates" that can zip through the tunnels by way of electric power once they descend into the underground network.

Alternately, he said, passenger cars could be outfitted with retractable side wheels allowing them to travel through the loop autonomously.

Musk arrived at Tuesday night's event in a Tesla vehicle so equipped, emerging from the car at one end of the tunnel - bathed in green and blue interior lights - as he was cheered by a small, enthusiastic crowd gathered for the presentation.

Musk created a stir earlier this year by promising free trips through the tunnel once it opened. However, no such rides were in the offing on Tuesday night. A company message posted online beforehand said tunnel tours "are by invitation only," citing "unbelievably high demand."

If successful, the Hawthorne tunnel is envisioned as eventually connecting to a network of other tunnels, yet to be built.

But Musk's company said it was moving ahead with a proposed tunnel across town to connect Dodger Stadium, home of the city's Major League Baseball team, to an existing subway line.

In June, Boring was selected by Chicago to build a 17-mile underground transit system linking that city's downtown to its main airport. The company also has proposed an East Coast Loop that would run from Washington, D.C., to the Maryland suburbs.