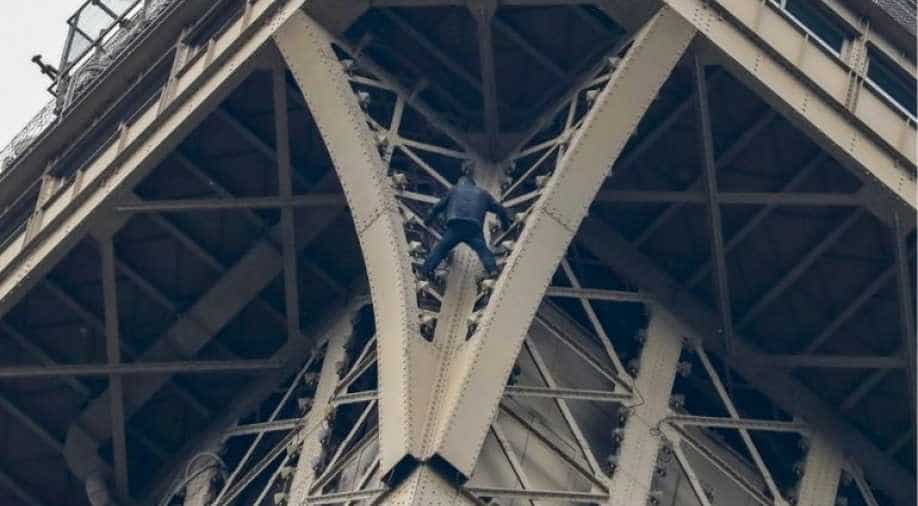 A man (C) climbs up to the top of the Eiffel Tower, in Paris, without any protection. Photograph:( Reuters )

"A climber has been spotted. It's the standard procedure, we have to stop the person, and in that case, we evacuate the tower," an official told AFP, adding that police were on the scene.

The Eiffel Tower was evacuated on Monday after a man was seen climbing up the iconic Paris landmark, one of France's biggest tourist draws, the operating company said.

"A climber has been spotted. It's the standard procedure. We have to stop the person, and in that case, we evacuate the tower," an official with the SETE operator told AFP.

The esplanade underneath the monument was also evacuated, as was a large section of the adjacent Champ de Mars park.

"We kindly advise our visitors to postpone their visit," SETE added on Twitter.

Police have made contact with the climber but do not yet know why he began his ascent up the iron beams, a police source told AFP.

At around 5:30 pm (1530 GMT) firemen were trying to reach the climber, dressed in a black jacket, by rappelling down from the third-floor observation deck near the top.

Crowds of tourists remained in the area, hoping the tower will reopen soon.

"We're really disappointed, we're only here for a week and this messes with our whole programme," said Sylvie and Celine Forcier from Quebec.

Justin and Karen Smith, from Los Angeles, had celebrated their wedding Sunday in front of the tower but we're hoping to get to the top Monday. "We're disappointed," he said.

The tower is regularly the target of rogue free-climbers hoping to scale one of the world's most famous structures, often for bragging rights.

But police have also been called in several times in recent years to try to thwart suicide attempts.

In October 2017, a young man ventured out on one of the beams and threatened to jump before police were able to convince him to come back.

In 2012, a British man managed to climb to the very top of the 324-metre-high tower before plunging to his death.

The first two floors can be reached by either elevator or stairs, but only elevators whisk people to the top observation deck.

That did not stop the French urban free-climber Alain Robert from making it one of his first targets in his campaign to scale the world's biggest buildings with no technical climbing gear.