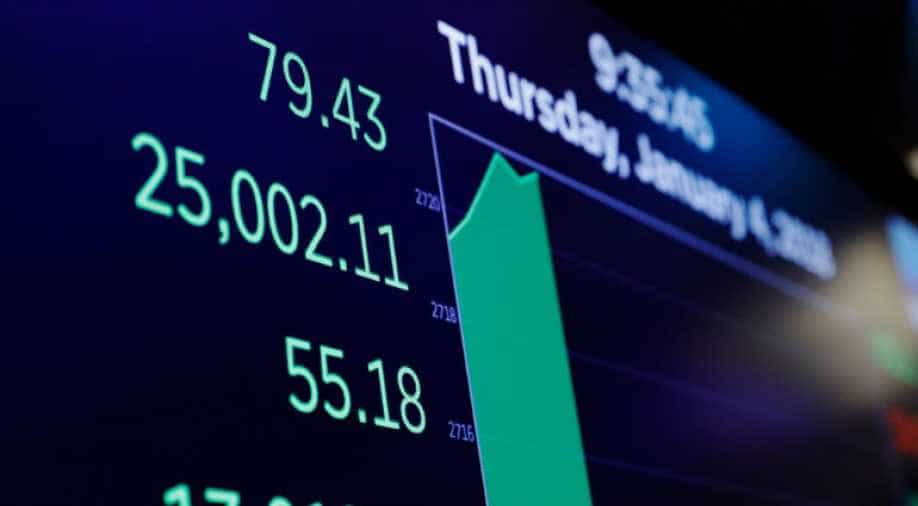 A board shows the Dow Jones Industrial Average as it rises above 25,000 on the floor of the New York Stock Exchange shortly after the opening bell on January 4. Photograph:( Reuters )

With the Dow Jones industrial index crossing the 25,000 mark for the first time, President Donald Trump has said 'Make America Great Again' was happening at a faster pace than anyone thought possible.

On Thursday, the Dow Jones industrial average closed over 25,000 for the first time and covered the fastest 1,000-point move in its history, following the release of stronger-than- expected jobs data.

"When the dreams of the American people are unleashed, there is nothing - absolutely nothing - we can't achieve. We are going to make America great again, and it's happening a lot faster than anyone thought possible," he said in a video message played during the daily White House news conference.

Trump said that the historic tax cut he signed into law two weeks ago, before Christmas, is already delivering major economic gains.

"Hundreds of thousands of Americans are seeing larger paycheques, bigger bonuses, and higher pension contribution, and it's all because of the tax cuts and the tax reform," he said.

Workers at AT&T, Bank of America, Comcast, Southwest Airlines, American Airlines, and many other companies were receiving bonuses of US $1,000 or more.

In his message, the US President said that Aflac and others are investing more in employees' 401(k)s. CVS announced it will hire 3,000 new workers. Boeing, another great company, is investing hundreds of millions of dollars in employee training and infrastructure.

Aflac provides supplemental insurance for individuals and groups to help pay benefits that major medical insurance does not cover.

A 401(k) is a retirement savings plan sponsored by an employer which allows workers save and invest a piece of their paycheque before taxes are taken out. Taxes are not paid until the money is withdrawn from the account.

"More than 60 companies have announced they are raising wages, including many that have voluntarily raised their minimum wage to USD 15 per hour -- and I mean they did that voluntarily, which many politicians said could only be achieved by government mandate," he said.

Trump also said that investing in American worker is the most important investment a business will ever make.

"I want to thank all of these companies for putting their tax savings to the best possible use by creating more jobs and higher wages for the American family. These great results are just the beginning," he said.

White House Press Secretary Sarah Sanders told reporters that the Dow Jones Industrial Average broke through 25,000 for the first time ever and it was the result of the President's economic agenda of lower taxes, less regulation and more opportunity for all which is paying off, and American families and workers are the big winners.

USA Today said rising stock prices have been powered by a global economic recovery and optimism that the Republican tax-cut bill will provide a fresh boost for the US growth and help American companies make more money.

"We should not be surprised that markets continue to move higher because fundamentals continue to be positive and investor optimism is actually improving rather than investors becoming more cautious," Kate Warne, an investment strategist at retail brokerage Edward Jon was quoted as saying by The Wall Street Journal.

A confident Trump also said that he has now set a new target of 30,000 mark.

"We broke a very, very big barrier - 25,000. And there were those who'd say we wouldn't break 25,000 by the end of the eighth year, and we are in the eleventh month. We broke 25,000 just as we came in now," Trump told reporters at the top of his meeting with Republican Senators on immigration.