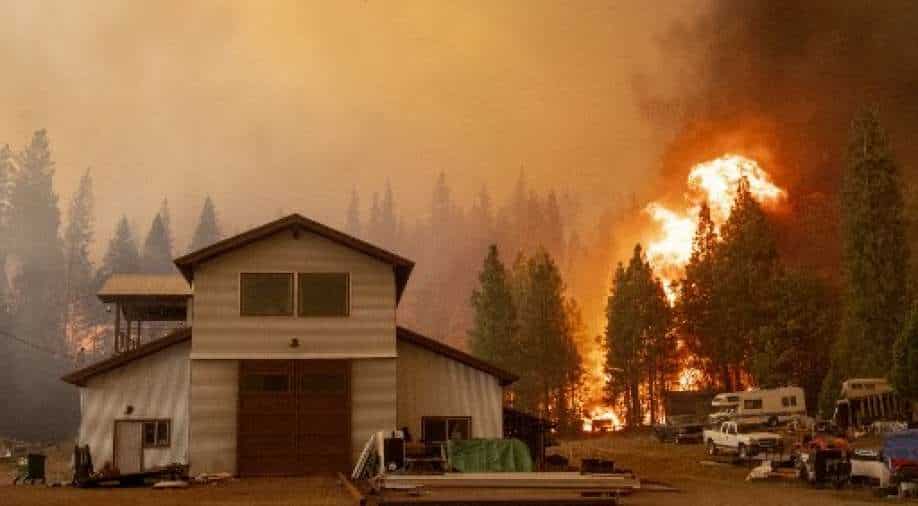 A huge wildfire tearing through northern California became the third-largest in the state's history Friday, and looked set to continue growing.

A long-term drought that scientists say is driven by climate change has left the western United States parched and vulnerable to explosive and highly destructive fires.

The Dixie Fire, which this week razed the Gold Rush town of Greenville, has torched more than 1,700 square kilometers since it erupted in mid-July.

Plumas County Sheriff Todd Johns, who is helping to coordinate the fight against the fire, said the destruction was devastating.

"I am a lifelong resident of Greenville. My heart is crushed by what has occurred there," he told a briefing on Thursday.

"To the folks that have lost residences and businesses... their life is now forever changed.

The town of Greenville stood charred and in ruins Friday, with timber structures gone completely and some stone buildings reduced to rubble.

Johns said there were no injuries so far from the huge blaze, but stressed it was vital that people in the path of the fire heed evacuation warnings.

"This fire is not over. If that plume is anywhere near your direction... you need to prepare. Wherever the wind blows this fire, that's where it's going to go."

More than 5,000 personnel are battling the blaze, which is sending enormous clouds of smoke into the air that are easily visible from space.

Incident managers said Friday they were expecting gusting winds would fan the blaze.

Those winds, coupled with steep terrain and an abundance of very dry vegetation, were fueling the flames and making the work of firefighters more difficult.

The Dixie Fire grew overnight by a fifth, to more than 430,000 acres, making it larger than the Bootleg Fire that has laid waste to a swathe of Oregon over the last month.

Thousands of square kilometers of the western United States have burned this year, an alarming result of the warming planet that has affected weather patterns.

By late July, the number of acres burned in California was up more than 250 percent from 2020, itself the worst year of wildfires in the state's modern history.

The Dixie Fire has evoked painful memories of the Paradise Fire, the deadliest blaze in California's recent history.

PG&E equipment is again being blamed for the Dixie Fire, after a tree fell on a power conductor the day the blaze began.

The utility announced in late July it will bury 10,000 miles  of power lines in a massive bid to prevent its equipment from igniting more deadly wildfires.

Greenville itself is no stranger to fire disasters. A catastrophic blaze destroyed much of the town in 1881, and several major infernos have threatened residents in the intervening 140 years.