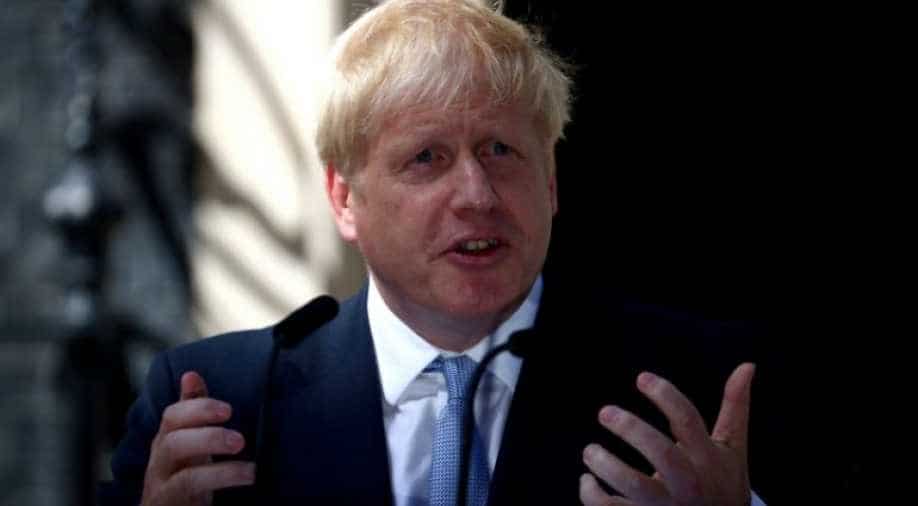 Johnson told Macron in a telephone call on Sunday that 'the EU should not be lured into the mistaken belief that the UK will stay in the EU after October 31st', a Downing Street spokesman quoted him as saying.

British Prime Minister Boris Johnson warned the European Union on Sunday he will not delay Brexit beyond October 31, underlining that his latest proposals are a last chance to reach a deal.

Johnson told French President Emmanuel Macron in a telephone call on Sunday that "the EU should not be lured into the mistaken belief that the UK will stay in the EU after October 31st", a Downing Street spokesman quoted him as saying.

The UK premier said he would not request another delay, despite British MPs passing a law last month that requires him to seek another Brexit delay if he fails to secure an agreement by the end of a make-or-break EU summit on October 17-18.

This law was "undermining negotiations, but if EU leaders are betting that it will prevent no deal, that would be a historic misunderstanding", a senior Downing Street source said.

"The UK has made a big, important offer but it’s time for the (European) Commission to show a willingness to compromise too. If not the UK will leave with no deal," the source added.

Watch: Is a Brexit Delay Inevitable?

Britain has urged the EU to intensify talks over the proposals, as European leaders warned it must revise its plans within days in order to conclude a deal this month.

Brexit Secretary Stephen Barclay said the bloc needed to show "creativity and flexibility" ahead of October 31 -- when Johnson has vowed to end the country's 46 years of EU membership with or without an agreement.

With the EU asking for reworked proposals within days, an Elysee Palace spokesperson said Macron agreed in his call with Johnson that talks between EU top negotiator Michel Barnier's team and British officials should continue in the coming days "to assess if an agreement is possible" by the end of the week.

Barclay reiterated that the ideas Johnson has formally submitted to Brussels were "a broad landing zone" and "intense negotiations" were now necessary.

"We've set out very serious proposals including compromise on our side," he told the BBC.

"We do need to get into the intensive negotiations on the text to clarify what the deal is."

Barclay added the government was considering holding a parliamentary vote ahead of the EU summit to show Brussels the plans have MPs' support.

European leaders had reportedly balked at Britain's request to keep initial discussions on the proposals going through the weekend, and they will resume on Monday, with time running out ahead of the EU summit.

Rutte tweeted he had told Johnson "important questions remain about the British proposals" and "there is a lot of work to be done ahead" of the summit.

Barnier told an event in France Saturday that while an agreement was still possible it "will be very difficult to reach".

The British leader is hoping the threat of a messy no-deal departure in less than three weeks could force the EU to compromise.

Barclay said Sunday that the government would comply with the legislation requiring Johnson to seek another delay if no deal is reached.

But in identical articles for two Brexit-backing British tabloids, Johnson insisted the country will leave the bloc later this month.

The British proposals submitted to Brussels Wednesday centre on how to manage the post-Brexit border between British province Northern Ireland and EU member Ireland.

Johnson wants Northern Ireland's devolved assembly -- which has been suspended for almost three years -- to vote every four years on whether to maintain EU rather than British regulations there.

He has also proposed the province leaves the EU's customs union along with the rest of the UK, with required checks to rely on untried technology and carried out away from the sensitive border.

Brussels has said the plans "do not provide a basis for concluding an agreement".

It sees the potential for rampant smuggling while Ireland is concerned hardline Northern Irish unionists would have an effective veto.

Barclay, who travelled to Amsterdam Sunday for Brexit talks, suggested Britain could be willing to consider alternative ways of meeting its aims.

Ireland's leader Leo Varadkar said Saturday there is "plenty of time" to put forward alternatives and he was trying to arrange a meeting with Johnson next week, Irish broadcaster RTE reported.