Armenians at a crossroads on last route out of Karabakh 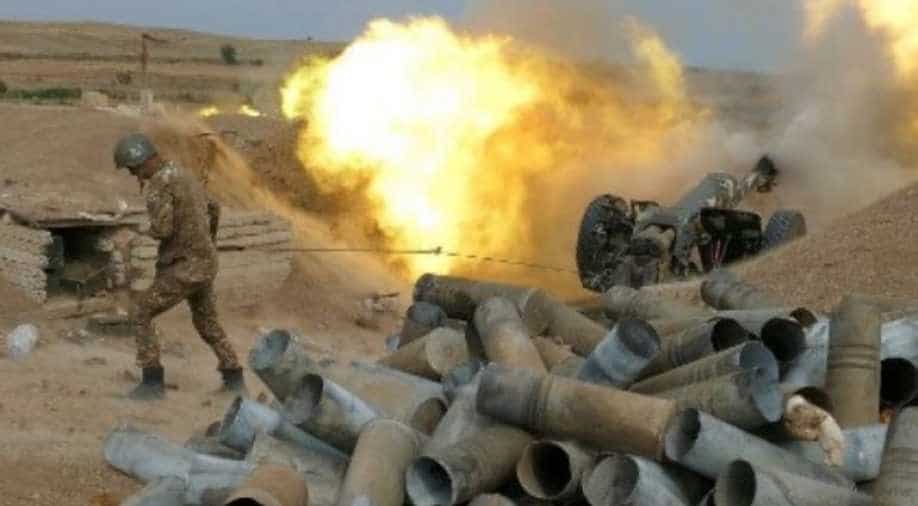 Russia has sent 2,000 peacekeepers to the region under the deal that ended six weeks of heavy fighting over Nagorno-Karabakh

Dressed in impeccable camouflage fatigues with Kalashnikovs slung over their shoulders, Russian peacekeepers stand guard along the last road linking Armenia with the restive region of Nagorno-Karabakh.

After meticulously writing down a car's registration number in a large notebook, a soldier stands aside to let the driver pass and wishes him a good journey.

"When the peacekeepers arrived, the situation became calmer than during the war. It's reassuring," says Erik Tovmasyan, who is driving from Karabakh's main city Stepanakert to the Armenian capital Yerevan for eye surgery.

For Armenians still reeling from defeat in recent fighting with Azerbaijan, the peacekeepers who deployed under a Moscow-brokered peace deal are a welcome presence.

But with the region surrounding the road set to be handed back to Azerbaijan next week, many here are facing an uncertain future.

Russia has sent 2,000 peacekeepers to the region under the deal that ended six weeks of heavy fighting over Nagorno-Karabakh, an ethnic Armenian enclave that broke away from Azerbaijan's control in a war in the 1990s.

Fresh clashes over Karabakh erupted in late September and ended after Azerbaijani forces had reclaimed large areas from Armenian control.

The peacekeepers have deployed between the two sides including along a 60-kilometre (35-mile) stretch connecting Stepanakert with the Armenian border in the south.

The strategic road runs through the Lachin district, the third and last territory near Nagorno-Karabakh that Armenia will cede to Azerbaijan on December 1 under the peace deal.

Two other districts — neighbouring Kalbajar and Aghdam to the northeast — were returned to Azerbaijan earlier this month.

In its northern part, the Lachin corridor diverges towards Shusha, a strategic and historic town overlooking Stepanakert that was captured by Azerbaijan in a pivotal moment of the war.

The small road leading to Shusha is blocked by soldiers from Baku, who are positioned close to the Russians.

AFP journalists passing nearby could hear Azerbaijani songs and music broadcast over loudspeakers from their position.

"They do it from time to time," says one of Moscow's soldiers.

At another checkpoint on a road leading into the town, an Azerbaijani special forces captain tells AFP that the situation inside is calm.

"There are only soldiers in Shusha," says the officer, who will not give his name. "Civilians (Azerbaijanis) come from time to time only to repair infrastructure" damaged in the fighting.

When Armenian separatists gained control of these districts three decades ago, local Azerbaijanis fled the territories and Armenians moved in.

Now, it is the Armenians who are deciding whether to abandon their homes, fearing what will happen when Azerbaijanis return.

In the town of Lachin, at the heart of the five-kilometre-wide (three-mile-wide) corridor, the manager of a grocery store is wondering what to do.

"We have no information about whether we should leave," says the man who does not wish to give his name, adding that he hopes to keep his store.

In front of his shop, 81-year-old Margarita Khanagyan leans on her cane as she stands next to an armoured vehicle belonging to the Russian peacekeepers.

"I left during the war, then we were told to come back and I came back. Now we have to leave again, but to where?"

Uncertainty also looms over the village of Aghavno, the last residential area before the border with Armenia where several dozen houses were built 10 years ago, just below the road.

Men here are always carrying rifles, prepared to defend themselves at any moment.

"They can't scare us," says village head Andranik Chavushyan, 39. "We will still be living here."

Standing next to him, Narine Rasoyan begins to cry.

Pregnant with her sixth child, Rasoyan lost her husband in the recent fighting.

"I have nowhere to go with my five children, where would I stay?" she says through her tears. "Let them give me a house and I will leave."