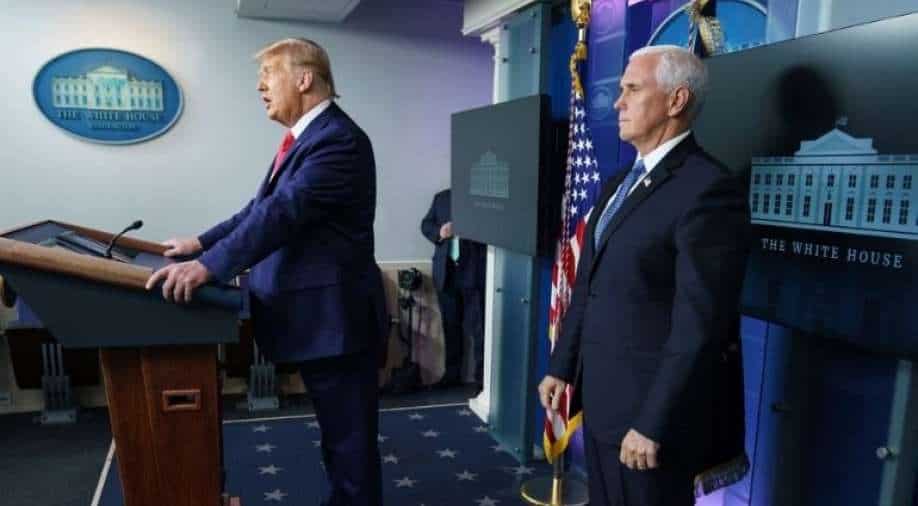 US President Donald Trump with Vice President Mike Pence (R), delivers remarks on the stock market during an unscheduled appearance in the Brady Briefing Room of the White House in Washington, DC on November 24, 2020. Photograph:( AFP )

Support for President Donald Trump’s attempt to overturn his election loss began to collapse in the Senate on Monday after the Electoral College certified President-elect Joe Biden’s victory, with many top Republicans saying the time had come to recognize results that have been evident for weeks.

While they insisted that Trump could still challenge the results in court, the senators said the certification should be considered the effective conclusion of an election that has fiercely divided the country. And after weeks of silence as Trump and others in their party sought to overturn the results in increasingly extreme ways, some urged their colleagues to move on.

“I understand there are people who feel strongly about the outcome of this election, but in the end, at some point, you have to face the music,” Sen. John Thune of South Dakota, the Republicans’ No. 2 in the Senate, told reporters in the Capitol. “And I think once the Electoral College settles the issue today, it’s time for everybody to move on.”

Even Sen. Lindsey Graham, R-S.C., who initially fanned Trump’s claims of fraud in key battleground states, said he now saw only “a very, very narrow path for the president” and had spoken with Biden and some of his likely Cabinet nominees.

“I don’t see how it gets there from here, given what the Supreme Court did,” he added, referring to the justices’ decision Friday to reject a long-shot suit by Texas seeking to overturn the results in a handful of states Biden won.

The comments amounted to a notable and swift sea change in a body that for weeks has essentially refused to acknowledge the inevitable, although the shift was far from unanimous. Sen. Mitch McConnell of Kentucky, the Senate majority leader, stayed conspicuously silent Monday, declining to acknowledge Biden’s victory. He dedicated his only public remarks to stimulus negotiations and ignored a question about the Electoral College proceeding shouted by a reporter in the Capitol.

A small group of Republican senators congratulated Biden almost immediately in November. But a majority had gone to great rhetorical lengths to avoid enraging a president who could turn their own voters against them — even as they privately conceded he had lost.

It was unclear Monday if those who relented were a harbinger of a larger shift by elected Republicans to accept Trump’s defeat, or a sign of a growing rift within the party between those willing to accept reality and those — a loyal core in the Senate and the vast majority in the House — who appear ready to follow him wherever he leads.

McConnell’s allies said that he would honor the election outcome come January, but did not want to pick a fight with Trump now, for fear of damaging Republicans’ chances in a pair of January Senate runoff elections in Georgia that will decide control of the chamber. He is also concerned, they said, that doing so could jeopardize a string of year-end legislative priorities that will require the president’s signature, including a catchall spending measure and the stimulus package to address the continuing toll of the pandemic.

But the effect has been that the most powerful Republican on Capitol Hill has, by intention or inaction, left unchecked insidious claims by Trump and those backing him undermining faith in the democratic process and Biden’s legitimacy as president.

One by one Monday, many of McConnell’s closest allies, including most of his leadership team, began to break ranks.

“I think he is president-elect, subject to whatever additional litigation is ongoing,” said Sen. John Cornyn of Texas, the former second-ranking Republican, referring to Biden as the winner of the election for the first time. “I’m not aware of any.”

Cornyn sought to discourage members of his own party from challenging the electoral results further when Congress meets in a joint session in early January to tally and finalize the outcome.

“That would be a bad mistake,” he said. “I think there comes a time when you have to realize that despite your best efforts, you’ve been unsuccessful. It’s sort of the nature of these elections. You’ve got to have a winner and you’ve got to have a loser.”

Sen. Charles E. Grassley of Iowa, the longest-serving Republican, captured the grudging acceptance of many of his colleagues after the Electoral College action when asked by a reporter if he now considered Biden the president-elect.

Sen. Thom Tillis of North Carolina, a Republican who rode Trump’s coattails to reelection last month, called Biden the “presumptive president,” pending the outcome of any lawsuits yet unresolved.

Others were more direct.

“We’ll deal with Vice President Biden as the president-elect,” said Sen. Roy Blunt of Missouri, chair of the Republican Policy Committee and the congressional panel planning next year’s inauguration.

“The presidential election is over,” said Sen. Lamar Alexander of Tennessee, a close ally of McConnell’s. “States have certified the votes. Courts have resolved disputes. The electors have voted. I hope that President Trump will put the country first.”

Still, many of Trump’s most ardent backers did not appear ready to change course.

Sen. Ron Johnson, R-Wis., planned to convene a hearing Wednesday to give Trump’s claims an airing in the halls of Congress.

That posture has infuriated Democrats and even some Republicans, who warned again Monday that by pressing Trump’s false claims about the election, the party was willfully misleading voters and abetting a threat to the democratic process itself.

“It is unacceptable for political candidates to treat our election system as though we are a third-world nation and incite distrust of something so basic as the sanctity of our vote,” Rep. Paul Mitchell of Michigan wrote in a letter to Ronna McDaniel, the Republican National Committee chair, and Rep. Kevin McCarthy of California, the party’s top House leader.

Mitchell, a member of his party’s leadership who is retiring, released the letter shortly after his state cast its 16 electoral votes for Biden. He wrote that he was leaving the Republican Party over its refusal to accept Trump’s defeat, and warned that his colleagues were risking “long-term harm to our democracy.”

“If Republican leaders collectively sit back and tolerate unfounded conspiracy theories and ‘stop the steal’ rallies without speaking out for our electoral process, which the Department of Homeland Security said was ‘the most secure in American history,’ our nation will be damaged,” Mitchell wrote.