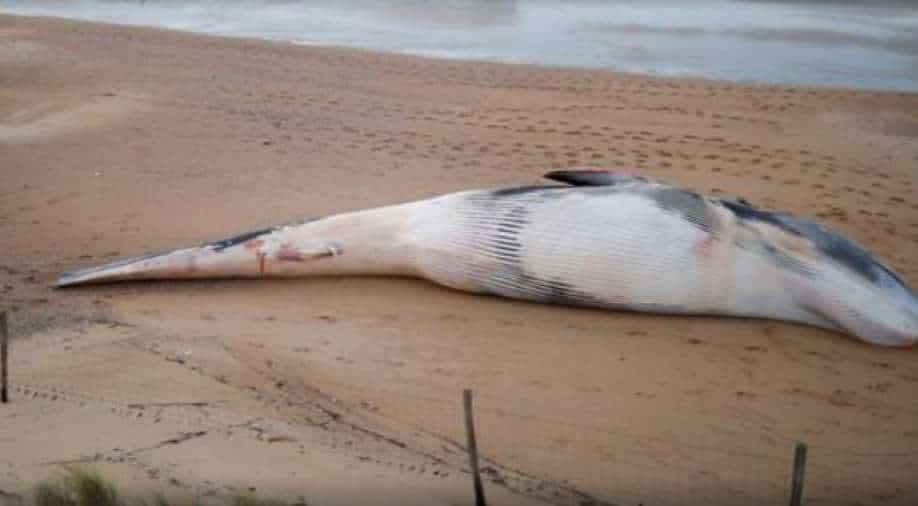 A dead fin whale which was found stranded on a beach last Saturday in Saint-Hilaire-de-Riez, France. Photograph:( Reuters )

In an average year, between three and, at most, 10 whales are deposited dead on France’s beaches, they say.

Marine biologists are investigating the deaths of at least six whales found washed up on France’s western shores with no apparent sign of having been hit by a ship or caught in a trawler’s net.

Researchers on Monday used a mechanical digger and long knives to dissect a fin whale, the second-largest species of whale after the blue whale, taking samples they believe might reveal evidence of a viral pathogen.

In an average year, between three and, at most, 10 whales are deposited dead on France’s beaches, they say.

“We have what is almost an epidemic or, at any rate, an abnormal spike in deaths,” said Willy Dabin, a researcher from the Pelagis Observatory working on the corpse.

The most recent fin whale corpse was found on Friday near Saint-Hilaire-de-Riez. It measured nearly 16 metres and weighed an estimated 10 tonnes.

The common fin whales have all died within the past six weeks. All have been malnourished and shown evidence of haemorrhaging in the cardiac and respiratory systems.

“The question lurking in the background is: are humans a contributing factor in their capacity to upset the environment?” Dabin said. “Either by impacting food availability or polluting the living environment, which could leave the whales more vulnerable to disease.”

Officials put guards near the carcass at the weekend to keep intrigued locals at a distance.

“It’s disgusting,” said one local man. “I don’t know how they’re going to remove it. Cut it up piece by piece?”