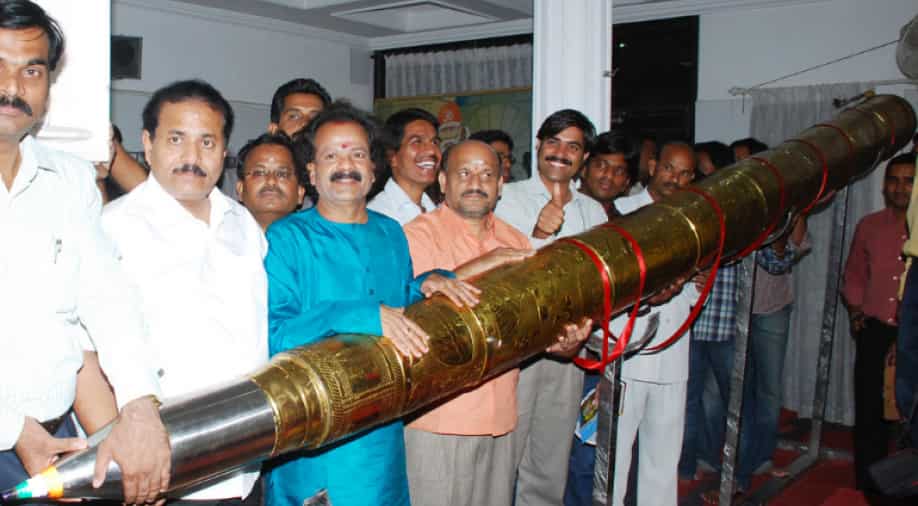 In this picture, Acharya Makunuri Srinivasa along with his team can be seen with world's largest ball pen (Credit: Wikimedia Commons) Photograph:( Others )

The massive pen, created in 2011, weighs 37.23 kg and is 5.5 metres in length according to a reel shared by the Guinness World Record on Instagram

Acharya Makunuri Srinivasa, an Indian man who lives in Hyderabad, has won the Guinness World Record for building the world's largest ball pen.

The massive pen, created in 2011, weighs 37.23 kg and is 5.5 metres in length according to a reel shared by the Guinness World Record on Instagram. It defeated the previous world record by 1.45 metres.

Vouching for the pen's functionality, Guinness said that, “As per the guidelines, the pen ‘dispenses ink at its tip during use by the rolling action of a small metal sphere’.”

In the video shared by Guinness, Srinivasa's team can be seen engraving scenes from Indian mythology on a white paper.

It has been liked by 67,500 Instagram users while 266 people have commented on the reel.

A user wrote ''This is what I mean when I say the pen is mightier than the sword.''

''The amount of work required for this is extraordinary,'' another user commented.

The Space Pen range made by Fisher Space Pen Company in the United States won the Guinness World Record for the most versatile pen as it uses special nitrogen-pressurised cartridges to dispense visco-elastic ink.