Wins for Arsenal, Manchester United as Europa League kicks off 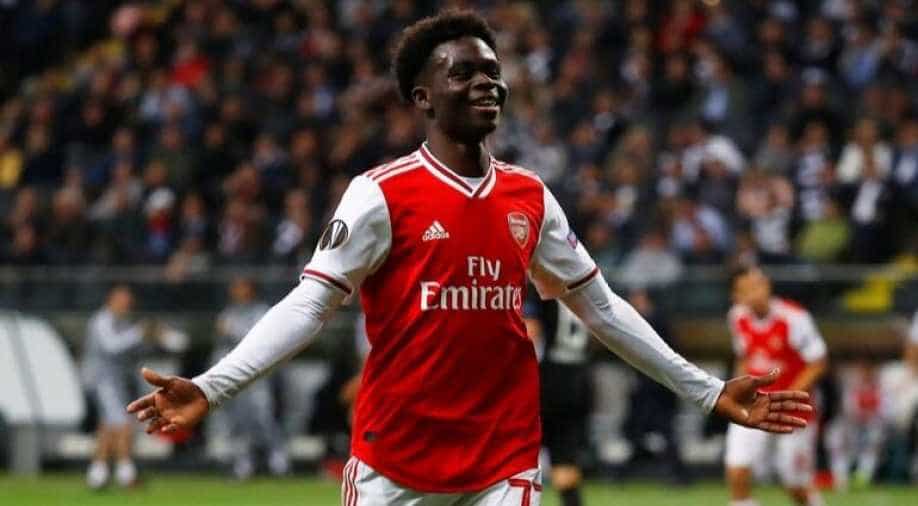 Roma also had a bright start in Group J with a 4-0 win over Basaksehir, while in Group D PSV Eindhoven edged Sporting 2-1 and Norwegians Rosenborg lost 1-0 at Austrians LASK

Joe Willock put Arsenal ahead in the first half with a deflected shot that flew in off the underside of the crossbar, but Frankfurt battled gamely until midfielder Dominik Kohr was sent off for picking up two yellow cards in the second half.

Londoner Saka, 18, added a second with a superb curling shot in the 85th minute and Pierre-Emerick Aubameyang slotted home a third to secure all three points for the Premier League side in the Group F clash in Germany.

It was Frankfurt's first loss in Europe in 16 games stretching back to 2006, and the win put Arsenal top of the group ahead of Standard Liege, who beat Vitoria Guimaraes of Portugal 2-0 at home.

Despite plenty of chances, Manchester United struggled to break down Kazakh side Astana until Greenwood got his first goal for the Old Trafford club in the 72rd minute of the Group L tie.

Partizan Belgrade, hit with a two-match stadium ban by UEFA because of racist actions by supporters, were allowed to fill the stands with over 20,000 children as they took on Dutch side AZ Alkmaar in the other Group L game.

The youngsters saw Israeli midfielder Bebras Natcho score twice, including a penalty, in an entertaining 2-2 draw.

Wolfsberg FC of Austria pulled off a shock by hammering Borussia Monchengladbach 4-0 away in front of a tiny band of travelling fans on their debut in the group stage.

Roma also had a bright start in Group J with a 4-0 win over Basaksehir, while in Group D PSV Eindhoven edged Sporting 2-1 and Norwegians Rosenborg lost 1-0 at Austrians LASK.

Apoel Nicosia came back from two down to lead 3-2 against Dudelange of Luxembourg, but goals by Dominik Stolz and Danel Sinani gave the visitors a 4-3 win in Group A. Qarabag slumped to a 3-0 home defeat by Sevilla in the group's other game.

Bulgarian side Ludogorets enjoyed a surprisingly easy win with the 5-1 thrashing of visitors CSKA Moscow in Group H.

It was an emotional night in Glasgow as Rangers faced Feyenoord after the death on Wednesday of their former player Dutchman Fernando Ricksen at the age of 43.

Ricksen, who died from motor neuron disease, signed for Rangers from AZ Alkmaar in 2000 and went on to become a revered figure at the club, winning two league titles and two Scottish Cup trophies during a six-year spell at the club.

Fans unfurled banners celebrating Ricksen before Sheyi Ojo scored the only goal of the game in the first half to give Rangers a 1-0 win in their Group G clash.

English Premier League side Wolverhampton Wanderers, making their first appearance in Europe since a 1980-81 UEFA Cup campaign, lost 1-0 at home to Braga in Group K, while Slovan Bratislava beat Besiktas 4-2 in the group's other game.

Dynamo Kiev and FC Copenhagen got 1-0 home wins over Malmo and Lugano respectively in Group B, while in Group E Cluj of Romania beat Lazio 2-1 and Rennes drew 1-1 with Celtic.

Winger Kevin Bua scored twice for Swiss side FC Basel as they got off to the perfect start in Group C by hammering visiting Krasnodar 5-0, while Getafe beat Trabzonspor 1-0.