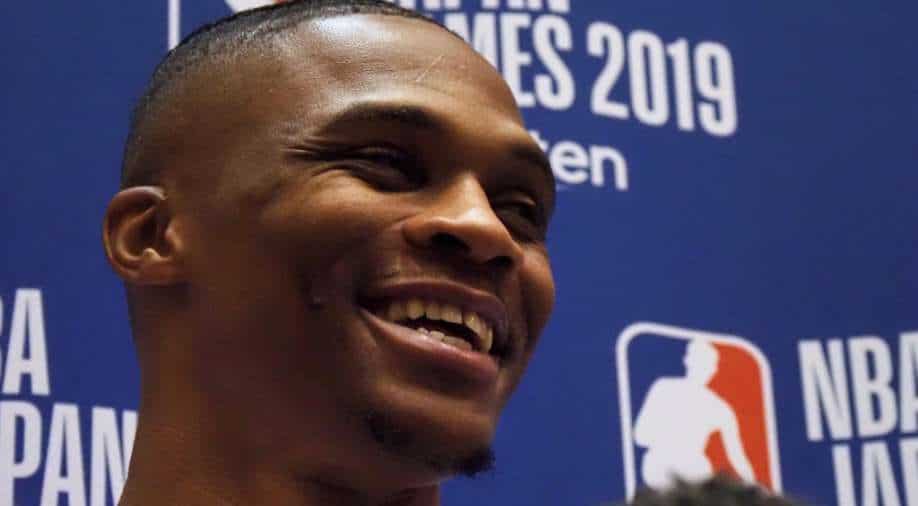 Wizards' guard Russell was making his way towards the dressing room after suffering an ankle injury during the fourth quarter, as he was limping towards the tunnel a fan poured popcorn at the Wells Fargo Center.

NBA star Russell Westbrook was left fuming after a fan poured popcorn on his head as he made his way to the dressing room during Wednesday's NBA playoffs game between Washington Wizards and Philadelphia 76ers.

Wizards' guard Russell was making his way towards the dressing room after suffering an ankle injury during the fourth quarter, as he was limping towards the tunnel a fan poured popcorn at the Wells Fargo Center.

Fan dumping his popcorn on Russell Westbrook, who's walking off after twisting his ankle. Fan should be banned for life. No room for this. pic.twitter.com/DXatcX8l9i

This fan should never be permitted in a #Sixers game ever again after throwing popcorn on Russell Westbrook while leaving court with injury. And they can track his ass down. No class! pic.twitter.com/ra029MaBDF

Westbrook has asked for more protection for the players after the incident. He said: "I wouldn't come up to me on the street and throw popcorn on my head because you know what happens," Westbrook said.

"In these arenas, you got to start protecting the players. We'll see what the NBA does.

"For me, there are a lot of incidents where fans, they say whatever, and the consequences for me are a lot more instrumental than to the fans in the stands because they feel they are untouchable," Westbrook added.

"Obviously I have learned to look the other way. But to a certain extent, you can't just keep looking the other way. There has to be some penalties or something to put in place where fans just can't come to the games and do and say as they please."

According to a report in ESPN, the fan, who poured the pop-corns was escorted out right after the incident.

Wizards' coach Scott Brooks felt that the fan should be banned and the Wells Fargo Center released a statement that said that the incident was "classless, unacceptable behavior" from the fan.

"We're proud to have the most passionate fans in the country ... but this type of behavior has no place in our arena," Valerie Camillo, the president of Business Operations for the Wells Fargo Center, said.