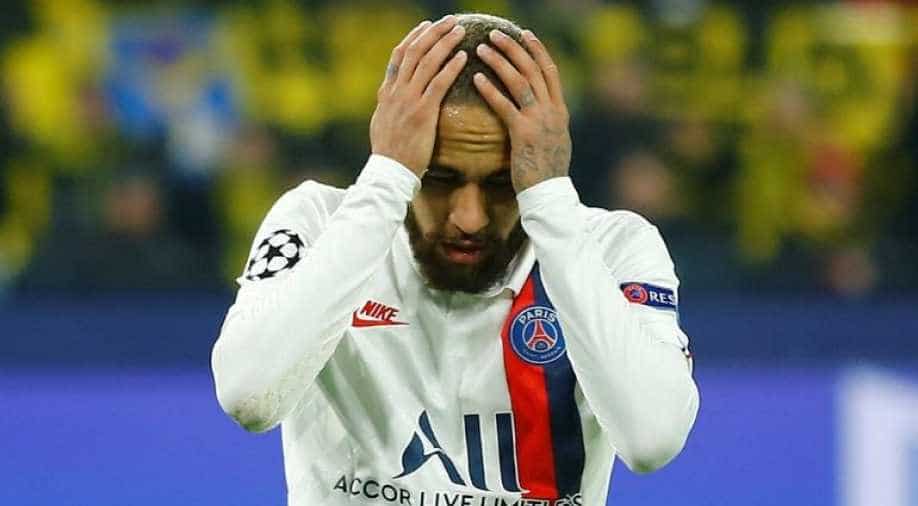 "It's hard to go four games without playing," said Neymar.

Neymar has criticised Paris Saint-Germain's handling of his recent injury after scoring in the 2-1 defeat at Borussia Dortmund, which leaves the French club facing the prospect of another early Champions League exit.

After missing four games in the last fortnight with a rib injury, the Brazilian superstar looked short of match fitness in Tuesday's last-16, first-leg, defeat at Dortmund.

Norwegian goal-machine Erling Braut Haaland scored twice to make him the Champions League joint top-scorer, but Neymar gave PSG a lifeline for the second leg in Paris on March 11.

He tapped home for what could prove a crucial away goal after being set up by France striker Kylian Mbappe in the second half.

Neymar, the world's most expensive player, was critical of the French league champions for not letting him play more before Tuesday's clash.

"It's hard to go four games without playing," said Neymar.

"Unfortunately it wasn't my choice, it was the choice of the club, of the doctors, they made that decision, which I didn't like.

"We had a lot of discussions about it because I wanted to play, I felt good, but the club was afraid and in the end, it was me who suffered."

Big-spending PSG is desperate to avoid exiting the Champions League at the first knockout round for the fourth season in a row.

"It was a tough game, but we have to do what we can in the return game," Neymar, 28, told reporters.

"Playing now at home is the best thing in the world, we have 90 minutes to do something.