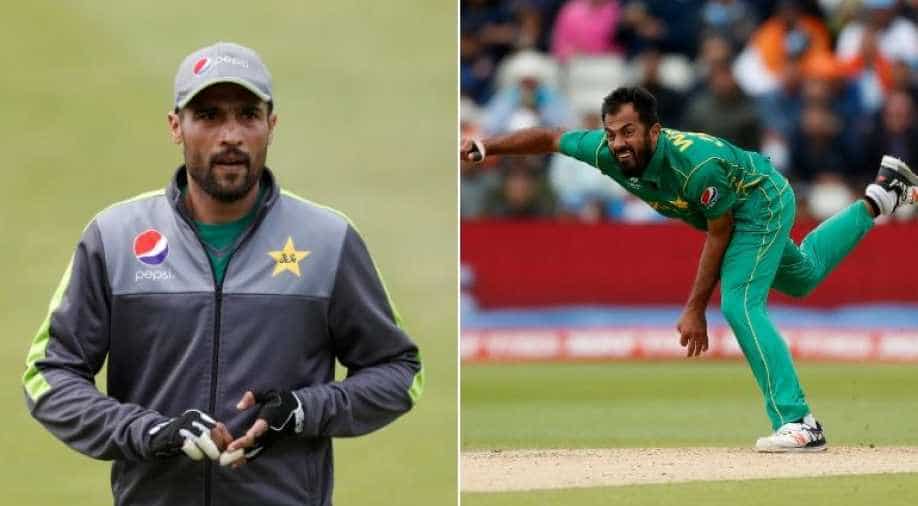 Both the bowlers were not included in the initial World Cup squad announced last month but Amir, who is yet to recover from chickenpox, was named for the one-day series against England which Pakistan completed on Sunday.

The selectors have axed allrounder Faheem Ashraf and left-arm pacer Junaid Khan from their initial World Cup squad to make way for the two senior players.

The selectors had discarded Wahab from the tour to England but after the thrashing given to the Pakistani pacers in the one-day series they apparently had a change of mind.

Wahab, who turns 34 next month, last played a one-day international for his country in the opening match of the 2017 Champions Trophy against India going for 87 runs without a wicket and than limping off with a injury.

Since than the selectors have ignored him for 50-overs cricket while Amir also didn't feature in the series against England after contracting chickenpox and his form remains a concern after he took just five wickets in his last 14 ODIs since the Champions Trophy.

According to the cricket board, Amir has recovered from his chickenpox and he and Wahab will be available for the warm-up matches against Afghanistan and Bangladesh this week.

In another major decision, the selectors have dropped young batsman Abid Ali from their World Cup squad to make way for the hard-hitting Asif Ali.

Ali was initially not part of the World Cup squad and went to England for the ODI series where he scored two half centuries.

"The lack of potency of our frontline bowlers in the recent ODI series meant that a change was needed. In addition, we now know that we will encounter batting wickets throughout the World Cup campaign," Chief Selector, Inzamam-ul-Haq said.

"The combination of these elements, meant that we believed right now, utilising the World Cup experience and knowledge of Wahab was the correct choice," he said.

"Wahab has been training and playing club cricket, and the player of his calibre will not face much problem in adapting and adjusting to the gruelling demands of the World Cup," Inzamam said.

On the exclusion of Abid Ali, Inzamam said: "It was not an easy decision to leave him out particularly after he got only one opportunity on the tour. But, he was our third choice opener. After both struck early form, we preferred Asif Ali as he brings firepower to the team that can strengthen our chances in the tournament," the Chief Selector said.

Abid, despite being a member of the initial World Cup squad, was given just one opportunity on the entire tour.

Inzamam said the final 15-member squad was announced in consultation with the captain and head coach.

Wahab has been included in the squad in place of allrounder, Faheem Ashraf while the experienced left arm pacer, Junaid Khan has also been dropped after playing in just two ODI matches against England.