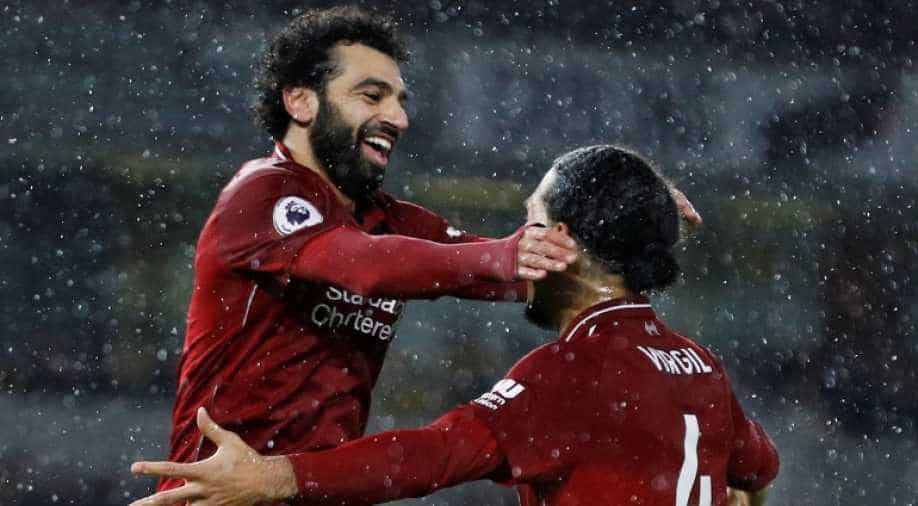 Only two teams - Chelsea in 2005-06 and City last season - have had more points after 18 Premier League games in a season than Liverpool's 48.

Liverpool will spend Christmas on top of the Premier League after goals from Mohamed Salah and Virgil van Dijk earned them a 2-0 win at Wolves on Friday, opening up a four-point lead over second-placed Manchester City.

City can reduce the gap back to a point with a win over Crystal Palace at the Etihad Stadium on Saturday, but Juergen Klopp's unbeaten side will now enjoy their Christmas dinner perched in first place.

Only two teams -- Chelsea in 2005-06 and City last season -- have had more points after 18 Premier League games in a season than Liverpool's 48 and the January 3 clash between Pep Guardiola's side and Klopp's men promises to be an epic.

It was by no means a vintage display from Liverpool in driving rain but this was a game which, coming after the high of Sunday's triumph over Manchester United, could have been a stumbling block for Klopp's side.

"It was clear that the whole game would be difficult. Everybody wants to press. We want to be compact but wide as well which makes it difficult. We defended it pretty well. The heavy rain was difficult for both teams tonight. It was a big fight. We knew that we needed to be ready," said Klopp.

"It was brilliant -- both goals. It was perfect football, especially on a night like tonight when it was difficult to play proper football," added the German.

On a foul night at Molineux, Wolves began brightly, the promoted side showing why they are in seventh place and Moroccan midfielder Romain Saiss forced Liverpool keeper Alisson Becker into an early save.

But Liverpool grabbed the lead in the 18th minute with a beautifully-worked goal. After a clever exchange with Sadio Mane, Brazilian midfielder Fabinho's pull-back was exquisitely turned in off the outside of his foot by Salah.

Adama Traore, Jonny and Matt Doherty all had chances saved by Alisson before the break, suggesting that Wolves, who had won their last three games, were still very much in the game but it was the visitors who extended their lead in the 68th minute.

Salah drifted a ball into the box towards Van Dijk and the towering Dutch defender calmly slotted past Rui Patricio from close range for his first Premier League goal.

Klopp had rotated his squad ahead of the festive fixtures with Georginio Wijnaldum starting on the bench and Jordan Henderson given the start in central midfield while Adam Lallana made an appearance in the second half as a substitute for the injured Naby Keita.

Klopp said Keita had suffered two separate cuts in his leg and foot from challenges but did not expect his injuries to keep him out of action.

The second goal killed off Wolves, whose inability to convert chances was highglighted again when substitute Morgan Gibbs-White shot into the side-netting near the end after a slip-up from Liverpool defender Andy Robertson.