Maradona, football legend, was a champion of Latin America's left 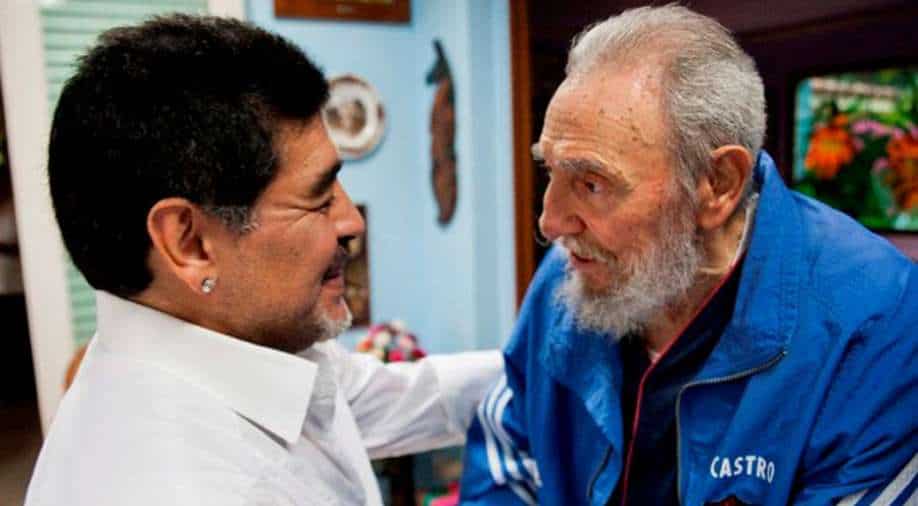 Argentina football legend Diego Maradona said his hero, late Cuban revolutionary leader Fidel Castro - whom he considered a “second father” and whose face he had tattooed on his leg - once urged him to go into politics.

Argentina football legend Diego Maradona said his hero, late Cuban revolutionary leader Fidel Castro - whom he considered a “second father” and whose face he had tattooed on his leg - once urged him to go into politics.

Maradona, who died on Wednesday aged 60, never fulfilled those aspirations but he did play a role in championing leftist leaders across Latin America - such as Castro, Venezuela’s Hugo Chavez and Bolivia’s Evo Morales - and in helping to lend them broader international appeal.

“Everything Fidel does, everything Chavez does for me is the best (that can be done),” Maradona said on Chavez’s weekly television show in 2007.

“I hate everything that comes from the United States. I hate it with all my strength.”

The son of a factory worker raised in a shantytown on the outskirts of Buenos Aires, Maradona first met Castro in 1987, a year after helping Argentina win the World Cup and four years before the fall of the Soviet Union that would usher in a new era of economic hardship in communist Cuba.

An unlikely friendship between the often outlandish footballer and the well-read revolutionary deepened at the start of the century when Maradona spent four years in Havana to shake an addiction to drugs.

“Coming from such humble beginnings, Castro was his idol,” said Alfredo Tedeschi, an Argentine TV producer now based in Belgium who became close friends with Maradona during a stint working for Reuters in Havana.

“It was like he fell in love (with Castro), and then came Chavez, Morales and the rest,” said Tedeschi, who would often invite the footballer over for traditional Argentine steak barbecue dinners.

Tedeschi recalls the time Maradona knocked on his door and proposed a spontaneous visit to Castro. The Cuban leader received them within minutes of their arrival and cleared his busy agenda to spend three hours with them, including to play football in his office.

“They would always talk about politics - Diego was really interested in politics,” said Tedeschi, adding that Castro would also pay spontaneous visits to his Havana home.

In 2005, Maradona interviewed Castro on his Argentine TV show, asking how George W. Bush had been re-elected president of the United States, to which Castro responded: “Fraud. The terrorist mafia of Miami!”

As such, Maradona was also a propaganda tool for Latin America’s leftist leaders, said Tedeschi.

“Diego was the kind of guy where anything he said would have a repercussion,” said Tedeschi. “And for Fidel, that kind of propaganda was welcome.”

In a twist of fate, Maradona died on the same date, Nov. 25, as his idol did four years ago - upon which occasion he said he “wept uncontrollably.”

“These two dates are intertwined on Nov. 25, and will be throughout history: two greats, one of football and the other of the Cuban revolution,” said pensioner Luis Perez, 64, in Havana.

Cuba’s Foreign Minister Bruno Rodriguez said on Twitter that Maradona’s “friendship with Cuba and especially with Fidel made him part of this people.”

Morales and Chavez’ successor, Venezuelan President Nicolas Maduro, also poured out condolences on Twitter. Maradona had voiced support for Maduro in the face of U.S. sanctions on his government.

“With grief in my heart, I learned of the death of my brother, Diego Armando Maradona, a person who felt and fought for the poor, the best football player in the world,” wrote Morales, an avid soccer fan.

The former Bolivian president recruited Maradona to play against him in a charity match in La Paz in 2008 to show his backing for Bolivia’s campaign against a FIFA ban on matches at high altitude. The ban was later overturned.