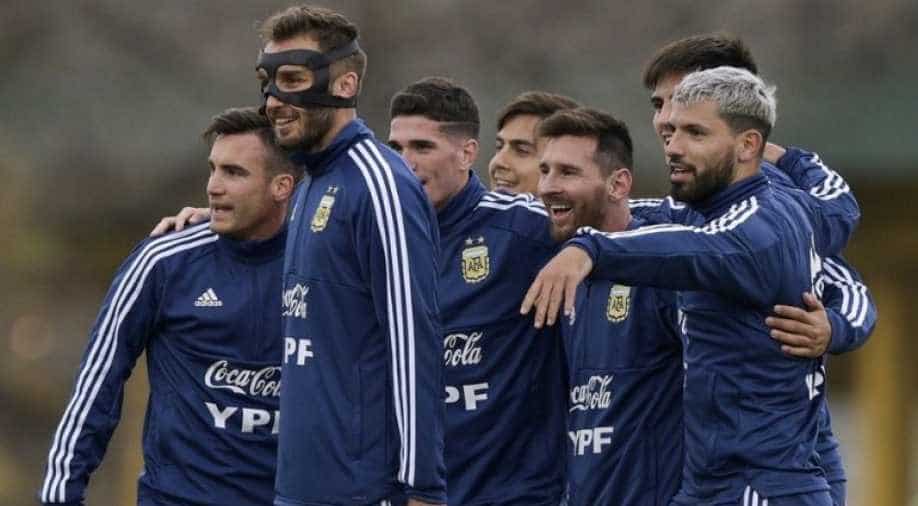 Despite trophy cupboards laden with club accolades, both Messi and Aguero have suffered much heartache with the Argentine national team

Lionel Messi still "loves" the Argentine national team despite more than a decade of disappointments, international team-mate Sergio Aguero said on Thursday as the pair prepare for the Copa America in neighbouring Brazil.

Despite trophy cupboards laden with club accolades, both Messi and Aguero have suffered much heartache with the Argentine national team.

Messi was also a beaten finalist in the 2007 continental tournament.

The five-time Ballon d'Or winner's national team frustrations are well known and at 31 he is fast running out of opportunities to win a major international honour with his country.

He has already retired from international duty once before -- albeit briefly -- and took eight months off following Argentina's World Cup last 16 exit just under a year ago.

"We all know the desire that Leo has when he comes here," said Aguero from Argentina's training base just outside Buenos Aires.

"The happiness he transmits is fundamental for us because we know very well how much he loves the national team."

Despite winning Spain's La Liga for the 10th time with Barcelona this season, it was a disappointing one for Messi even at club level.

He made no secret of his desire to win the Champions League this season, even admitting before the campaign began how much he wanted to bring that "beautiful cup back to Camp Nou."

He's won it four times with Barca but not since 2015, and in the last three seasons the Catalan giants have been eliminated after crushing away defeats -- the last two of those despite taking a three-goal advantage into their second leg matches from the first leg at the Camp Nou.

At the weekend, Barca also lost 2-1 to Valencia in the Copa del Rey final.

"No-one likes to lose. Obviously, he's been disappointed in the last competitions after the Champions League and Copa del Rey" defeats, said Aguero.

"But he's great, he's experienced, he knows football is like this, that there is joy and in some moments there is sadness... He knows that better than anyone."

The Argentine national team has been training at home this week ahead of a pre-Copa friendly against Nicaragua on June 7.

They will then leave for Brazil where Messi and his partners will begin their Group B campaign against Colombia in Salvador on June 15.

They will also play Paraguay and Asian champions and the next World Cup hosts Qatar, first time guests to South America's major showpiece.

While Messi and Aguero have more than 200 caps and over 100 international goals between them, much of coach Lionel Scaloni's squad is made up of inexperienced youngsters.

"Most of us are new, there's a new coaching staff. (But) Argentina is Argentina, us players will fight until the end for Argentina to be the best," said Aguero.