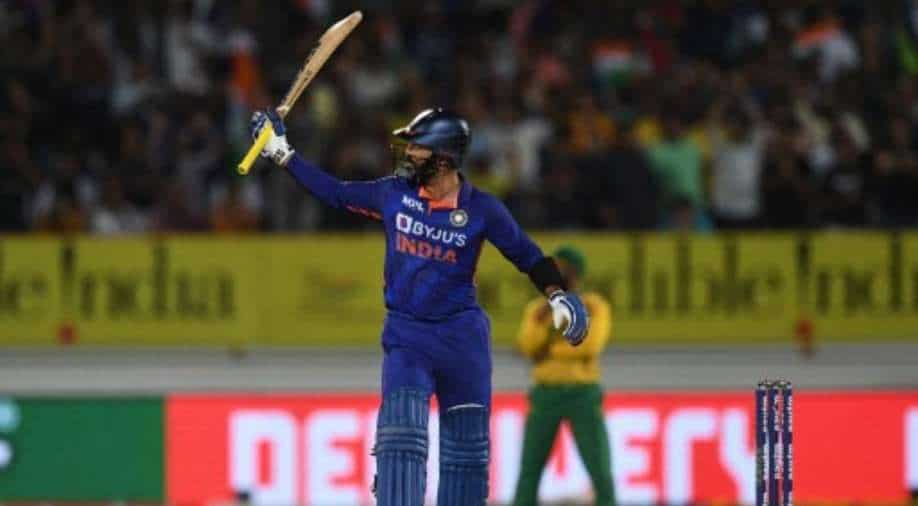 India's Dinesh Karthik raises his bat after scoring a half century (50 runs) during the fourth Twenty20 international cricket match between India and South Africa at the Saurashtra Cricket Association Stadium in Rajkot on June 17, 2022. Photograph:( AFP )

Karthik smashed 55 off 27 deliveries to guide India to 169-6, a total their bowlers defended by dismissing South Africa for 87 and level the five-match series at 2-2 in Rajkot.

The Proteas slipped to their lowest ever T20 total, two lower than their 89 all-out against Australia at Johannesburg in 2020.

Avesh returned his T20 best figures of 4-18 as the hosts in Rajkot defended their total with ease for the second time in a row with the series decider on Sunday in Bangalore.

The in-form Karthik set up the crushing victory with his maiden T20 fifty to lift India from a precarious 81-4 in the 13th over to take the attack to the opposition.

He put on a crucial 65-run stand with Hardik Pandya, who hit 46 off 31 deliveries, as the pair hammered the opposition bowlers to all parts of the ground.

The 37-year-old Karthik, who is enjoying his second coming with the national team, smashed nine fours and two sixes as he surpassed his previous best of 48 to make India plunder 73 runs from the final five overs.

In reply, the visitors were never in the chase after skipper Temba Bavuma retired hurt on eight with an injured elbow and the team soon lost two wickets.

Wicketkeeper-batsman Quinton de Kock was run out for 14 and Dwaine Pretorius out to Avesh in the fifth over.

Wickets kept tumbling and Harshal Patel raised the pitch at the nearly packed house after he bowled the dangerous David Miller for nine.

Avesh returned to take three wickets including Rassie van der Dussen for 20 in the 14th over to flatten South Africa on a seemingly tough pitch to bat.

Spinner Axar Patel got the ninth wicket to end South Africa's innings in 16.5 overs as Bavuma, who sat in the dugout with an ice pack on his elbow, did not come out back to bat.