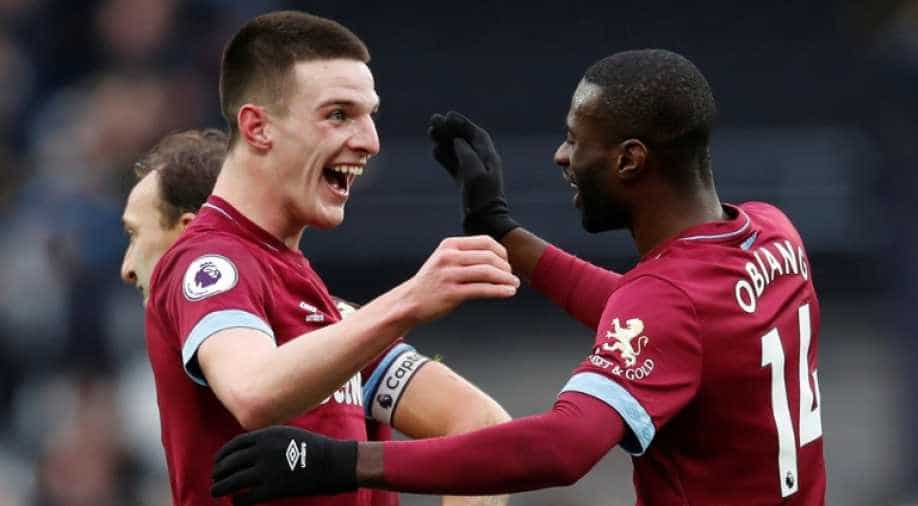 Arsenal began brightly and then had a flurry of chances after falling behind but West Ham were good value for the three points as they put a dent in Arsenal's top-four hopes.

Declan Rice's first goal for West Ham United earned his side a deserved first home victory over Arsenal for 13 years on Saturday -- the youngster's 48th-minute strike securing a 1-0 win at the London Stadium.

Arsenal began brightly and then had a flurry of chances after falling behind but West Ham were good value for the three points as they put a dent in Arsenal's top-four hopes.

Former Arsenal midfielder Samir Nasri, rebuilding his career at West Ham after a doping ban, was at the heart of much of their best work on his Premier League debut for the club.

It was the Frenchman's neat lay-off that allowed 19-year-old midfielder Rice the space to curl a superb shot past Bernd Leno.

The victory pushed West Ham into eighth place, before the rest of the weekend's fixtures, and after a difficult start manager Manuel Pellegrini appears to be turning West Ham into a side capable of challenging for the European places.

The Chilean, who steered Manchester City to the title, was happy with his former player Nasri who was given a resounding ovation when he was substituted midway through the second half.

"It was a good performance by Samir, he kept the pace for 65 minutes," Pellegrini told Sky Sports. "I've spoken to him and told him I'm sure he can be the player he was."

Rice had already headed wide before halftime but the 19-year-old was lethal the next time an opportunity arrived.

Felipe Anderson's surge down the right and cross saw the ball land at the feet of Nasri who had the vision to shift it to Rice who finished like a top-class striker -- celebrating his big moment wildly with his teammates.

"I can't really put it into words," said Rice ahead of his birthday on Monday. "Usually I would pick a pass but I was in the box so I thought why not take it on? It went in the top corner and we beat Arsenal so it's a special moment for me."

Striker Alexandre Lacazette had a double chance for the visitors early on, forcing a save from former Arsenal keeper Łukasz Fabianski before firing the rebound over the bar.

West Ham then took control with Nasri dragging a shot wide and then setting up influential Brazilian midfielder Anderson to fire a daisy-cutter just past the post.

At the other end, Matteo Guendouzi's 25-metre effort flew just wide but Arsenal struggled to exert any sustained pressure.

After Rice's goal Arsenal did manage to raise the tempo with Alex Iwobi and Pierre-Emerick Aubameyang going close but West Ham weathered the storm and were worthy winners.

Fifth-placed Arsenal failed to score for the first time in 21 league matches and have now lost consecutive away games. They could find themselves six points behind fourth-placed Chelsea by the time they host their London rivals next weekend.

"We didn't impose ourselves on the game but we had enough (quality) players to win the game," manager Unai Emery said.