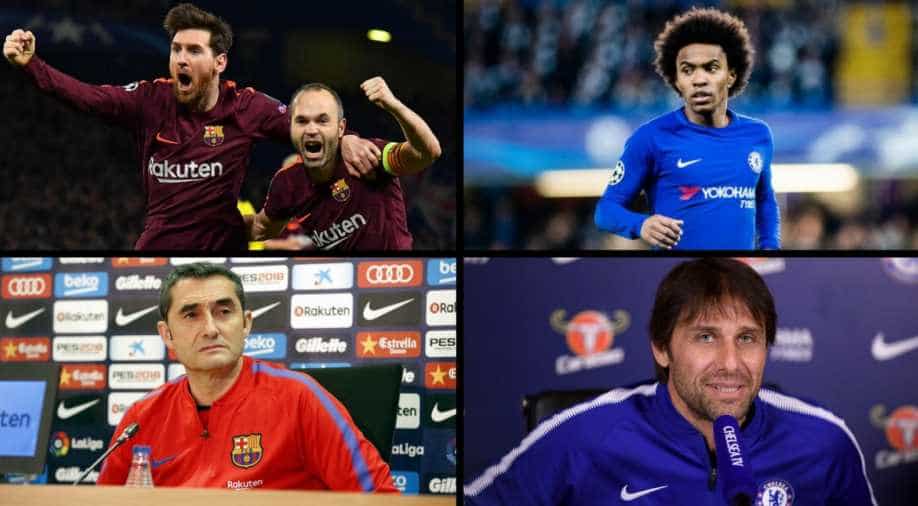 "In the first leg, we made a mistake we paid a lot because of this mistake" - Antonio Conte, Chelsea manager

Remember what the mistake was, see the highlights of the last clash:

Conte is talking about the loophole in Chelsea's defence when Iniesta's beautiful assist to Messi equalised the score in the 75the minute to relax the Barcelona fans and followers.

FC Barcelona will host Chelsea in a decisive second leg clash of the of the UEFA Champions League round of 16 at their home ground Camp Nou on Tuesday night/ Wednesday morning. The match will start at 1:15 pm local time.

The nailbiting first leg tied 1-1 and now both the teams are ready to carry forward the clash tonight. The winner of today's game will enter the quarterfinals of Champions League.

Antonio Conte-led Chelsea has a chance only if something extraordinary happens. In a recent interview, he said, "The final result of the first leg, give(s) a great advantage to Barcelona, but at the same time I think we know very well the philosophy of Barcelona and for sure they want to try to play their football tomorrow, to try to score and to try to win the game."

He further added, "When you play against Barcelona, against a team that I consider, Barcelona, one of the best in the world."

On the other hand, Barcelona coach Ernesto Valverde said, "We are worried about the danger Chelsea can put us under because they have a great counter-attack and strategy."

"They have so many virtues, players such as (Eden) Hazard or William who are able to shoot at goal from anywhere on the pitch," he further added.

With Messi in their line-up, Barcelona has a superior record against nearly every opponent they have faced in Europe, but that is not the case against Chelsea as the 'Blues' are unbeaten in their last eight matches.

Blues have no injury issues and back with Chelsea defender Antonio Rudiger as he missed the last clash against Crystal Palace.

Andres Iniesta was spotted training so fans are expecting his return in the big clash as he suffered a hamstring injury.

Lionel Messi is back into the action as he missed his last match due to the birth of his third baby.

Philippe Coutinho won't he is ineligible for the match having previously played for Liverpool in the group stage of the competition before the transfer.

Nelson Semedo and midfielder Denis Suárez are also both out with injuries.