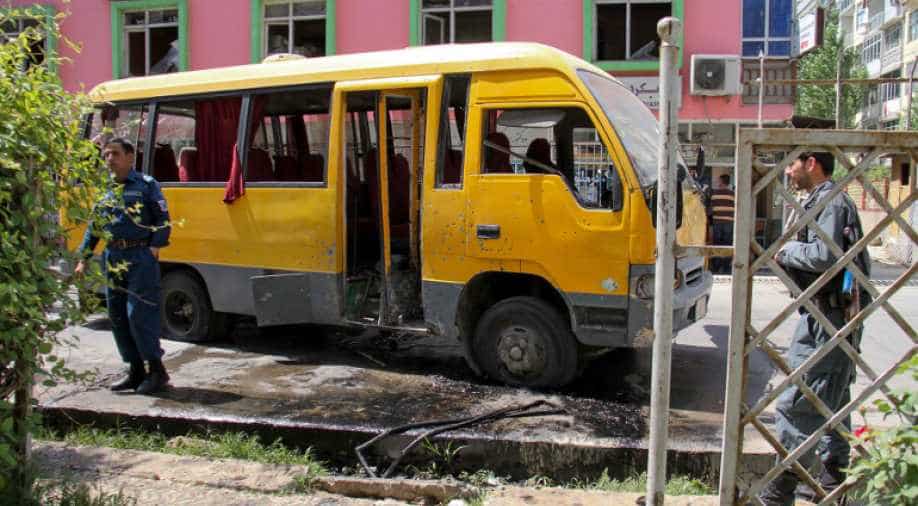 Afghan security personnel stand near the a damage bus carrying university students at the site of the successive bomb blasts in Kabul on June 2, 2019. Photograph:( Reuters )

The device had been placed under the bus, interior ministry spokesman Nasrat Rahimi said.

Two people were killed and dozens more wounded in Kabul on Sunday as a wave of bombings hit civilian targets -- including a university school bus -- across the Afghan capital.

The yellow bus had been heading to Kabul Education University in the western part of the city Sunday morning when it was hit by a sticky bomb -- a growing menace in Kabul, where insurgents and criminals use magnets to slap explosives on vehicles.

The device had been placed under the bus, interior ministry spokesman Nasrat Rahimi said. In the immediate aftermath, as people rushed to help victims, two more bombs that had been planted by the side of the road went off, he added.

Among the wounded was an Afghan journalist who appeared to have been live-streaming the aftermath of the first explosion when he was hit in a secondary blast.

Initial reports said the bus was carrying university officials, but Kabul police spokesman Firdaws Faramarz later said students had been on board.

According to health ministry spokesman Wahidullah Mayar, two people were killed and 24 more wounded. Among those wounded were five Afghan security forces.

The journalist was expected to recover from his leg wounds. Last year, nine journalists including AFP Kabul's chief photographer Shah Marai were killed in a secondary explosion after rushing to the scene of an initial blast.

A fourth blast rocked Kabul later Sunday, when yet another sticky bomb hit a vehicle in the western part of the city. Initial reports said three people were wounded.

President Muhammad Ashraf Ghani condemned the attacks, saying the "enemy" cannot "weaken the faith of our people for a bright and progressive future of Afghanistan."

The continued violence in Afghanistan comes even as the Taliban and the US are set to begin a new round of peace talks in Doha this month.

On Friday, a Taliban car bomber killed at least four Afghan civilians and lightly wounded four US troops in an attack on a US convoy in Kabul.

A day earlier, at least six people were killed and 16 more wounded in an IS-claimed suicide blast outside a military academy in the capital.

And eight Afghan police were killed Saturday and seven others wounded in a suicide attack in the eastern city of Ghazni, provincial police spokesman Ahmad Khan Seerat told AFP.

Ghani had proposed a nationwide ceasefire at the start of Ramadan early last month, but the Taliban rejected the offer.

Taliban head Haibatullah Akhundzada said Saturday there would be no "cold water" poured on the insurgents' military efforts.