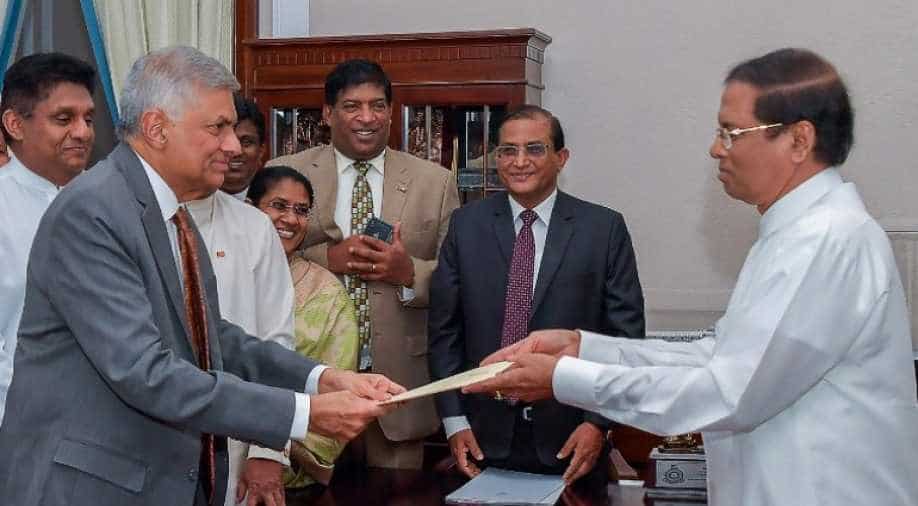 Sirisena reinstated Ranil Wickremesinghe as prime minister on Sunday after the Supreme Court threw out his attempt to dissolve parliament and hold early elections in the Indian Ocean nation.

Sri Lanka's President Maithripala Sirisena named a 30-member cabinet Thursday to end a crippling seven-week power struggle with his prime minister, but only after a final tussle over who should control the police.

Sirisena reinstated Ranil Wickremesinghe as prime minister on Sunday after the Supreme Court threw out his attempt to dissolve parliament and hold early elections in the Indian Ocean nation.

"The forming of the cabinet was delayed because the president wanted to retain media and the police," government spokesman Rajitha Senaratne said as the new cabinet was announced.

"He conceded the media ministry, but will retain control over the police for a little longer."

No law and order minister was named in the new cabinet and Sirisena, who also serves as defence minister, will take responsibility for the police.

Sirisena sparked the political crisis on October 26 when he sacked Wickremesinghe in a bid to name nationalist firebrand Mahinda Rajapakse as prime minister. He had to backtrack in the face of opposition from the legislature, where he had no majority and Sri Lankan courts.

In a statement in New York, UN Secretary-General Antonio Guterres, who called for "restraint" at the beginning of the crisis, welcomed its conclusion "by peaceful, constitutional means".

Guterres called for all sides to use the appointment of the new cabinet to "resolve outstanding political differences... in the interest of the people of Sri Lanka."

Shortly after giving Wickremesinghe his job back on Sunday, Sirisena made it clear that working with the new government would be difficult.

"I still believe that I should not have made Ranil Wickremesinghe the prime minister, but I bow to the wishes of the majority in parliament," Sirisena said.

"But, I don't know how far we will succeed in fulfilling the wishes of our people."

Sirisena came to power in 2015 with the help of Wickremesinghe's United National Party (UNP), but personal and political clashes came to a head with the October sacking.

The 69-year-old Wickremesinghe refused to give way to former president Rajapakse, leaving the country with two claimants to the prime minister's post and no functioning government.

The Sri Lankan parliament backed Wickremesinghe's claim that his dismissal was illegal, voting six times against Rajapakse during tumultuous sessions that at times erupted into brawls.