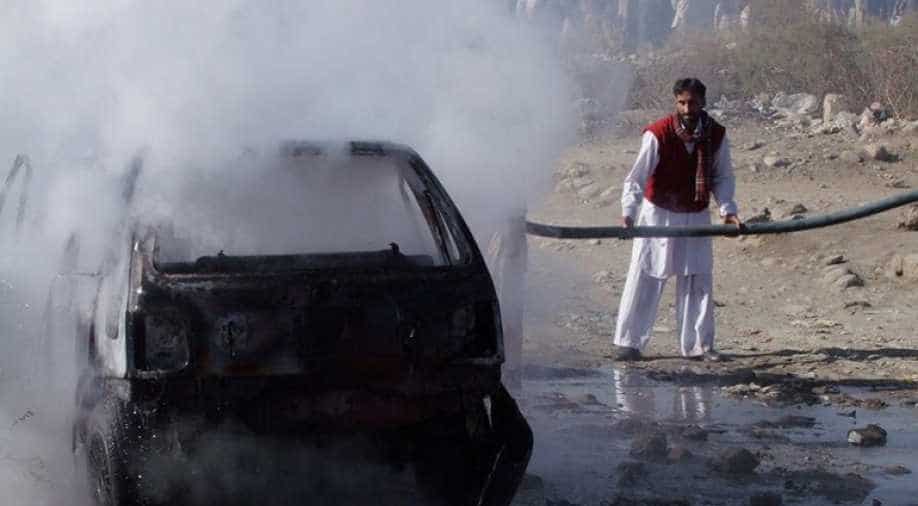 There are contradictory reports regarding the cause of the blast, with officials differing in their views on whether it was a suicide bomb attack or a homemade bomb. (Representative Image) Photograph:( AFP )

At least 21 killed and more than 40 injured in a bomb blast at Eidgah market in Kurram Agency's Parachinar, Federally Administered Tribal Areas of Pakistan on Saturday morning, Pakistani media reported.

Sajid Hussain Turi, member of the National Assembly from the region said,"We received 21 bodies of the local tribal people killed in the blast."

He said there will be a mass funeral and then a demonstration over the attack.

Security forces cordoned off the area and investigation has started to ascertain the cause of the blast.

There are contradictory reports regarding the cause of the explosion.

According to Turi, a homemade bomb had been planted in a pile of tomatoes.

The market was crowded with busy shoppers when the incident took place.

Another official, Sabzali Khan, according to initial reports, a suicide bomber blew himself up.

Ashiq Hussain, an eyewitness said he saw bodies scattered around the market and the injured crying for help.

"There was no ambulance, and people had to carry the injured in cars and private pickup trucks to the hospital," Hussain told Reuters.

The injured were transported to the agency headquarters hospital.

Kurram is a sensitive area which has witnessed dozens of attacks in the past several years.

Bordering three Afghan provinces, it was once a major route for militants to cross the border.

The Khurram agency is adjacent to North Waziristan where Operation Zarb-i-Azb, a military offence by the Pakistan Armed Forces against various militant groups including the Tehreek-i-Taliban.