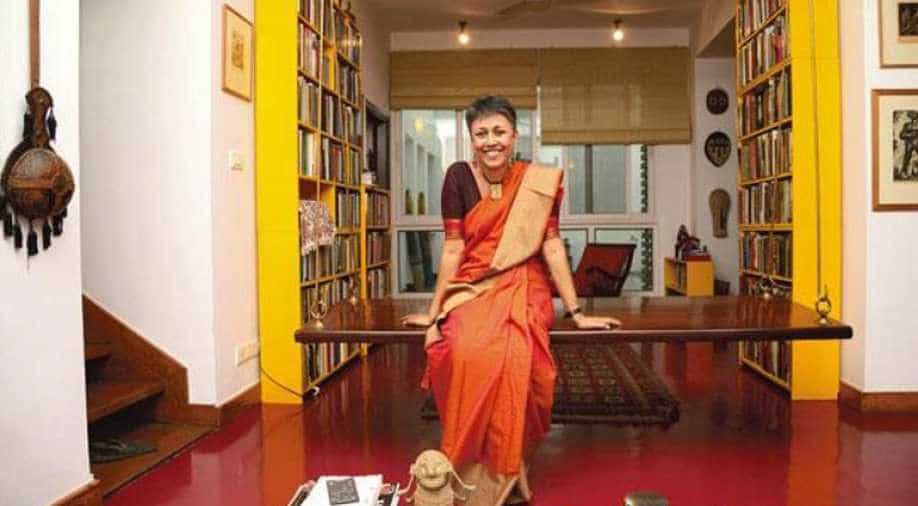 The slain, along with his associates was leading a protest against Maoist activities in the Nama village in April when he was killed by armed Maoists. Photograph:( Twitter )

A prominent Delhi university academician and activist along with ten others were booked for alleged involvement in the murder of a tribal villager, Shamnath Baghel in the Sukma district of the central Indian state of Chhattisgarh.

The police, acting on the complaint of Baghel's wife on Saturday, charged professor Nandini Sundar, who heads the department of sociology at the Delhi University with murder, criminal conspiracy and rioting.

The slain, along with his associates was leading a protest against Maoist activities in the Nama village in April when he was killed by armed Maoists.

Earlier in May, Baghel had lodged a complaint against Sundar for allegedly inciting tribals against policemen.

The Delhi-based sociologist, Sundar has worked extensively in the conflict-torn state and recently published a book, 'The Burning Forest, India's war in Bastar' which talks about police atrocities in Chhattisgarh.

She had even petitioned in the Supreme Court of India to ban state-backed anti-Maoist militia Salwa Judum, terming the anti-insurgency operation unconstitutional.

The police told reporters that Baghel's wife had alleged that the professor and other workers conducted meetings to provocate the villagers. She even said that his husband had received threats, saying he would be eliminated if he did not fall in line. Baghel and some of the villagers had reportedly filed a complaint in May against Sundar.

However, some prominent voices in the country came out in support of the DU professor. These people are of the view that Baghel's wife was coerced to name the professors at the behest of the inspector general of police, Kalluri himself.

Nandini Sundar alleged that the charges were a clear act of vendetta by the police and that Kalluri has been targeting activists working in the region. "Kalluri is afraid of being implicated in cases that activists have been fighting here for years," she told the media.

"The FIR filed against us by the Bastar police is patently absurd. We condemn the killing of Shamnath Baghel. This is clearly part of IG Kalluri's attempt to intimidate and harass journalists, lawyers, researchers, political leaders and human rights activists who have exposed the reign of fake encounters, gang rapes etc. that are going on in Bastar. In particular, this is a direct fall out of the CBI charge sheet of special police officers turned constables for arson in Tadmetla in 2011, an operation which Kalluri directed. First our effigies were burnt by the police and now a false FIR is being filed against us.

This should also show what kind of false cases have been filed against Adivasis (tribals) all these years – people are routinely charged in cases where they have no involvement at all. That’s why the jails of Chhattisgarh are so over-crowded." Nandini wrote on her Facebook wall.

Delhi University Teachers Association, President, Nandita Narain, talking to WION said, "It is nothing but a witch-hunt of scholars and activists who have been challenging the state narrative. Nandini Sundar is an academician of international repute and it it is completely absurd to allege her of instigating a murder. It is her years long work in the state with the Adivasis that has upset the police, which is now framing her in a false case."

Manisha Sethi, a renowned human rights activist and professor at Jamia Millia Islamia, New Delhi also raised apprehension about the case filed against Nandini Sundar, terming it a revenge by the state of Chattisgarh for bringing to mainstream the lawlessness of Bastar.

"The case against Nandini Sundar, Archana Prasad and other activists reeks of malevolent vendetta. It is obviously intended to teach Sundar a ‘lesson’ for constantly bringing to the mainstream attention issues of militarisation and lawlessness in Bastar, and her relentless pursuit of justice in killings, rapes and arson by the agents of the state. Coming days after the CBI filed charge sheet against SPOs and Salwa judum leaders in the Tadmetla violence of 2011, a case which Nandini has kept alive through her writings and legal interventions, the vindictiveness of the charges against her is all the more apparent." she told WION.

Meanwhile, internationally acclaimed scholar, Ramcharandra Guha, took to Twitter and wrote that the FIR against Nandini is vicious and vindictive and it proves beyond doubt that Chattisgarh is a police state.

Amid all the charges and counter claims, Chattisgarh police have maintained that it is taking the FIR very seriously and is "determined to take action against those named in the FIR after investigation".