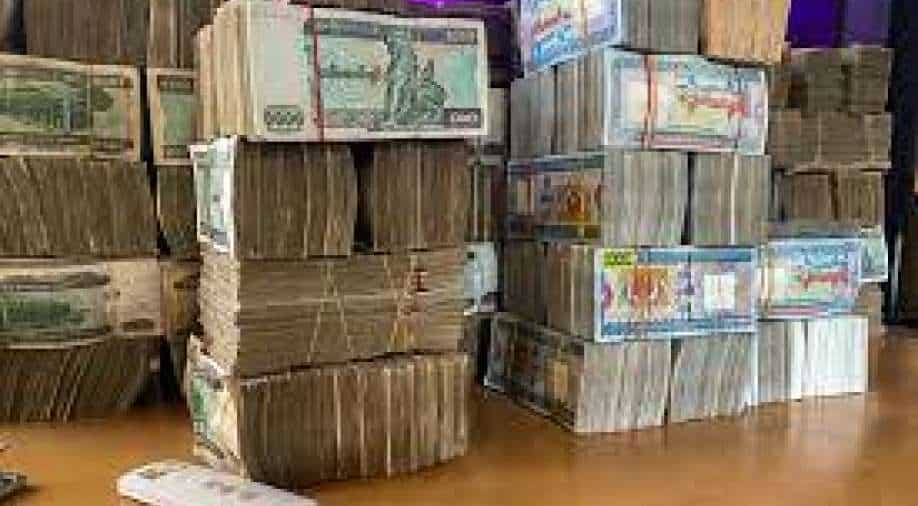 Myanmar banknotes are seen during an illegal exchange inside a house in Yangon, Myanmar, Photograph:( Reuters )

As Myanmar’s economic stoop deepens after February’s army coup and components of its monetary system freeze up, many within the strife-torn nation are turning to on-line teams to bypass official channels to commerce currencies

As Myanmar`s economic slump deepens after February`s military coup and parts of its financial system freeze up, many in the strife-torn country are turning to online groups to bypass official channels to trade currencies.

The fragility of the financial system was further exposed this week when the kyat currency sank to new lows after the central bank gave up on attempts to prop it up. Many licensed money exchanges and gold shops shut their doors in the turmoil that followed.

The online groups, which run mainly on Facebook, have become a way for buyers and sellers of currencies to connect, often relying on trust when arranging physical exchanges of notes.

"I posted to sell some old notes yesterday in the group," said May Lay, a Yangon resident, referring to what she said was the sale of about $190 into kyat on a Facebook group.

"I lost my job and have had no income recently. Life is difficult with a one-year-old child," she said, noting how her household spending on food had doubled.

In the immediate months after the February 1 coup, long lines of people queued up to withdraw cash from banks, though recently kyat savings have taken an ever bigger hit with the currency losing 60 per cent of its value against the dollar in September.

Speaking after the World Bank warned this week the economy could slump 18 per cent this year, the ruling military council`s spokesman Zaw Min Tun said on Thursday the central bank had been unable to meet local demand for dollars.

One of the biggest of the groups set up on Facebook called "Dollar Buyer Seller Direct" had about 170,000 members, with the group`s administrator warning users to be careful before making a deal.

"The seller, the buyer, both take responsibility," it warned.
The group appears to have been taken down in recent days, though at least one other site has emerged to fill its place.

In Myanmar, money traders are supposed to get a licence to operate. Central bank officials did not respond to requests for comment.

Asked about such sites using its platform, Rafael Frankel, director of public policy emerging countries, Facebook Asia Pacific, said: "Our dedicated team, including regional experts, continues to monitor the situation in Myanmar in real time and we will take action on anything that violates our policies as soon as we become aware of it."

"Our thoughts are with the people of Myanmar at this difficult time," Frankel said.

Still, with some money changers halting operations and official exchange rates now well out of line with market rates, more people have been drawn to the online sites to do their own deals, which are concluded in person.

"It`s like a black market. Both parties have to worry until the deal is done," said Ye Yint Tun, 33, who turned to becoming an unofficial currency broker after losing his job as a real estate agent for expatriates.

While initially asking for a 20 per cent fee, he has now slashed that to 2per cent to make it more attractive and reckons he earns about 10,000 to 20,000 kyat per day, or about $4 to just over $8, based on recent exchange rates.

"There are risks that you will be robbed while you doing exchange. So, we have to be very careful."

The online groups also tap into the flows of money remitted by overseas workers in neighbouring countries like Thailand.

"Millions of dollars are being smuggled into Myanmar from Thailand daily," an unlicensed money trader based in Thailand said, noting how the roughly four million Myanmar workers in Thailand needed to send money back to family members.

"We use Facebook as our platform for selling money," said the trader, who declined to be named.

Workers from Myanmar in Thailand pay traders with their Thai baht earnings, who in turn give kyat to family members in Myanmar and use the baht to buy U.S. dollars.

Another Thai-based trader described how U.S. dollars were smuggled into Myanmar overland, sometimes hidden in clothes or household items.

"In September alone, I traded about 30 million baht ($890,000). The trade is much higher compared with previous months," said the trader.