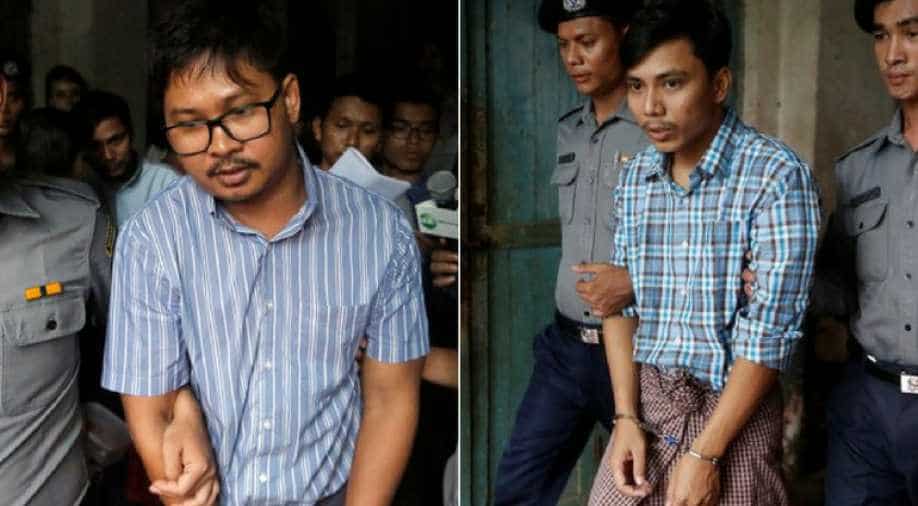 The letter, given to President Win Myint at the inauguration of the semi-official Myanmar Press Council (MPC), pointed out contradictions in the case against Wa Lone, 32, and Kyaw Soe Oo, 28, who were sentenced to seven years in jail in September.

Groups representing journalists and lawyers in Myanmar handed a letter to the country's president on Friday outlining their concerns over the jailing of two Reuters reporters convicted of breaking state secrets laws.

The letter, given to President Win Myint at the inauguration of the semi-official Myanmar Press Council (MPC), pointed out contradictions in the case against Wa Lone, 32, and Kyaw Soe Oo, 28, who were sentenced to seven years in jail in September.

Their convictions have raised questions about Myanmar's progress towards democracy and sparked an outcry from human rights advocates.

Myanmar's de facto leader Aung San Suu Kyi said in September that the case had nothing to do with freedom of expression. She has also urged people to read the judgment in the case and "point out where there has been a miscarriage of justice".

The letter, signed by the Myanmar Journalist Network (MJN) and several other groups, including two countrywide lawyers' associations, said that because Wa Lone and Kyaw Soe Oo were employed as professional journalists their case should have been dealt with under the country's media law, not the colonial-era Official Secrets Act.

"The Official Secret Act was prescribed in order to prevent espionage. In modern times, that act is no longer appropriate and needs to be reviewed," the letter said. "A sentence of seven years to each of the reporters is forbidding the media and denies the public's right to access information."

Government spokesman Zaw Htay said at his twice-monthly news conference on Friday that the government could not interfere in the case as Myanmar's courts were independent. He confirmed that the president had received the letters from MPC members, but did not discuss them further.

The letter also said Wa Lone and Kyaw Soe Oo had followed the facts on the ground to report stories of high public interest, had shown professional balance in seeking comment from police officers in order to tell both sides of the story and did not violate Myanmar's media law.

Before their arrest, the reporters had been working on an investigation into the killing of 10 Rohingya Muslim men and boys by security forces and Buddhist civilians in western Myanmar during an army crackdown that began in August last year. The operation sent more than 720,000 people fleeing to Bangladesh.

During the ceremony in the capital Naypyitaw, one of the newly-appointed MPC members, Thar Lun Zaung Htet, also handed over letters from the wives of the journalists and called on the president to review the case.

Defence lawyers this month appealed to the High Court against the conviction.