'Make In India' being hobbled by red tape, taxes, and bribes 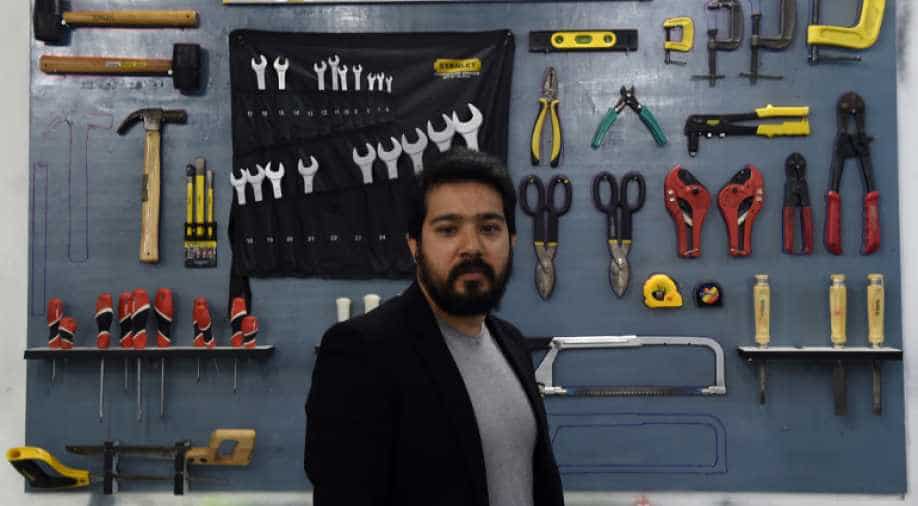 When Saurabh Ahuja (pictured) tried to import a $600 3D printer for manufacturing drones in his Delhi workshop, he ended up spending another $900 in taxes and bribes and waited three months for it to clear customs. Photograph:( AFP )

Make in India is being hobbled by red tape, taxes, and the insistence on bribes

When Saurabh Ahuja tried to import a $600 3D printer for manufacturing drones in his Delhi workshop, he ended up spending another $900 in taxes and bribes and waited three months for it to clear customs.

"We lack in technology and industry to make the smallest things, so we have to import," Ahuja said as he listed the frustrations entrepreneurs still encounter since the government launched its "Make In India" project.

"If my business grows, the country grows with me. But the government won't let me grow."

Since coming to power in 2014, Narendra Modi has been looking to overhaul India's image as an awkward country in which to do business and instead emulate China by becoming a global manufacturing hub.

In September that year, the right-wing premier unveiled "Make in India" as a flagship initiative which would have an "unprecedented overhaul of out-dated processes and policies" at its core.

If my business grows, the country grows with me. But the government won't let me grow,' says Saurabh Ahuja, director, Nuts and Boltz

The government has tried to woo investors by promising to simplify the tax regime and liberalise rules on foreign direct investment (FDI).

But in the World Bank's most recent chart ranking countries for their ease of doing business, India came 130th out of 190.

While much of the focus has been on the travails of foreign firms, local entrepreneurs who should be the poster boys of Indian manufacturing are also struggling.

The printer that Ahuja did eventually manage to import from China to build everything from drones to robots had nearly 300 parts.

He first had to submit a sheaf of documents, including details of the exporter and the product catalogue to officials at Delhi airport.

He was then told each part would have to be tested before being let through. Three months and 150,000 rupees ($2,250) in warehouse charges later, he got his consignment only after he coughed up a bribe, he said.

Officials at the airport did not respond to an emailed query for comment.

Ahuja, 29, launched his company Nuts and Boltz six years ago from a basement in northwest Delhi to provide other budding entrepreneurs a place to experiment with product ideas.

For an hourly rental fee, clients have access to equipment such as 3D printers and circuit boards.

But while the prototypes can be crafted in India, nearly all the manufacturing ends up being outsourced overseas.

'Mad in India'
"Maker spaces are great because you can quickly launch a prototype and get credibility," said Navi Radjou, co-author of the book "Frugal Innovation".

"But then you open a Pandora's Box because if a customer asks for 2,000 units of your product, you're screwed since you can't make it at that scale and that leads to a lot of frustration."

"It's one thing to say we want to focus on manufacturing and that's why we have liberalised FDI and that's why we're trying to improve the ease of doing business," Sinha, principal economist at Fitch India, told AFP.

"But the crucial component is what's happening at the state level, at the local level.

"Anyone setting up a factory or business needs water and electricity connections and various permissions and annual regulatory filings to different government watchdogs. Those are the major stumbling blocks and there are no significant changes at that level.

"Many of the large companies ... have special access to the corridors of powers, but for the small guy no one will even answer his call so he has to strike a deal with whoever is the hurdle."

Ahuja was reminded of how onerous it was to manufacture at scale when the government last year banned the imports of lithium polymer batteries, needed to power the drones.

He now buys the batteries from Mumbai from someone who smuggles them in and then charges $300 a go, double the actual cost.

"Since the parts are not easily available, we've put on hold our classes to teach people how to make drones," Ahuja said.

His complaints find echoes among large-scale manufacturers such as Rajiv Bajaj, head of the Bajaj Auto conglomerate.

A long-established motorbike manufacturer, Bajaj wants to introduce a quadricycle but has encountered multiple obstacles.

"If your innovation in the country depends on government approval or the judicial process, it will not be a case of 'Made in India', but 'Mad in India'," Bajaj said in a speech this year, using a twist on the government's campaign slogan.