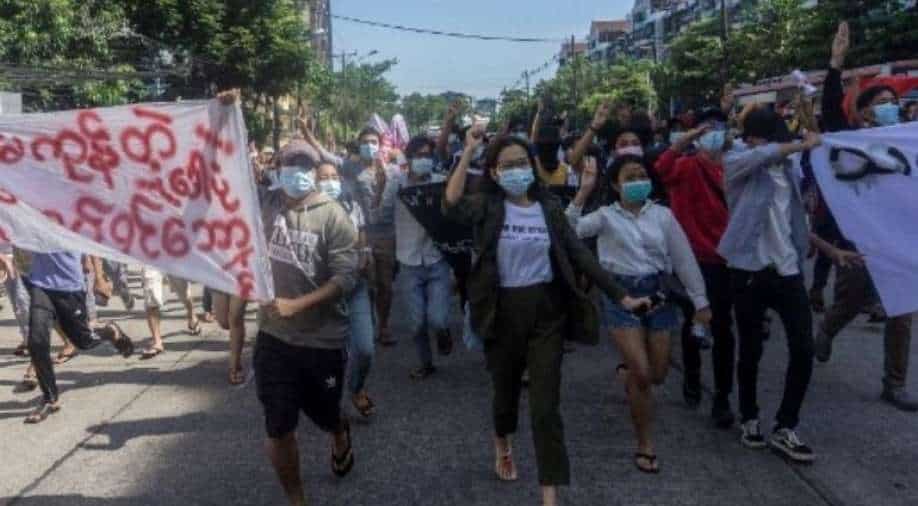 Protesters hold up banners and the three-finger salute during a demonstration against the military coup in Yangon on May 14, 2021. Photograph:( AFP )

Little is known about the conditions of detainees across Myanmar, as those released rarely speak out about it

Beaten, kicked in the groin and threatened with sexual violence - a young Myanmar teenager detained by the junta's security forces has described the treatment suffered by some women and girls behind bars.

Ma Chaw, 17, and her mother were arrested on April 14 in Yangon, Myanmar's commercial capital, which has been blanketed with heavy security since the military seized power in a coup.

As they were walking to a friend's house from a morning protest, she said, they were stopped by two security trucks.

"They forced us to crouch face-down on the ground," Ma Chaw told AFP.

The high school student then faced six days of fear and anxiety, held with women who alleged torture and abuse by police behind closed doors.

Ma Chaw said she herself had to endure a police officer molesting her during an interrogation session.

The teenager was released on April 20, but her mother was not as fortunate, she was instead taken to Yangon's Insein prison.

"My mother is my only family," she said. "I'm very worried for her safety and life."

To secure her release, she said, she had to sign documents saying she suffered "no torture" behind bars.

"It's the opposite of what they have done," Ma Chaw said. "It is totally unacceptable and unfair."

Her mother is among more than 3,800 civilians arrested and still languishing behind bars since the February 1 coup, according to local monitoring group the Assistance Association for Political Prisoners.

Little is known about the conditions of detainees across Myanmar, as those released rarely speak out about it.

Ma Chaw said she and her mother were taken first to a local police station where they were questioned separately.

"I was touched by a police officer, who told me he could kill me and make me disappear," she said.

"If I didn't push his hand away, I'm sure he would have continued."

She added that her mother was slapped twice during her interrogation.

The following day, they were taken to a detention centre on Yangon's northern outskirts where they met other women, some of whom had bruises all over their bodies.

One of them, a woman who had been in a relationship with a foreigner, was beaten so badly she could barely talk or eat, Ma Chaw said.

"We had to feed her fried egg and rice," she said. "She told us she couldn't urinate because her women parts had been kicked during the interrogation."

The National Unity Government, an underground group of ousted lawmakers opposing the junta, has announced it is investigating the "allegations of sexual and gender-based violence against women and girls in unlawful detention".

"These cases are indicative of the wider pattern of sexual and gender-based violence committed by Myanmar's military that has persisted for years with impunity, particularly against ethnic minority women and girls in armed conflict areas," it said in a statement.

Another woman held in the same detention centre as Ma Chaw recalled similar experiences. Both women have been given pseudonyms because of the sensitivity of their allegations.

Ngwe Thanzin told AFP she and four others were protesting in Yangon's South Okkalapa township when they were arrested.

"I was kicked in my face for having a black mask in my bag," she said, adding that security forces also yelled misogynistic abuse at them.

The women were then taken to the same detention centre as Ma Chaw, where Ngwe Thanzin said she was handcuffed so tightly it left marks on her wrists.

"They also threatened us saying they could kill us and make us disappear without anyone knowing it," she told AFP.

During her three-night detention, she said she saw a 19-year-old girl bruised so badly she could barely stand.

"They don't beat or torture in front of other people. But when people were individually interrogated, they came out with bruises."

AFP was unable to independently verify the allegations made by Ma Chaw and Ngwe Thanzin.

Repeated attempts to contact the junta spokesman for a response went unanswered.

And junta-appointed Minister of Social Welfare Thet Thet Khine, who chairs a National Committee on Prevention and Response to Sexual Violence in Conflict, could not be reached for comment.

Ngwe Thanzin said the least the junta could do was have female security personnel available to interrogate them, instead of men.

"All our rights and dignity were violated and abused," she said.

"Since we have no rights, I felt we were like water in their hands."